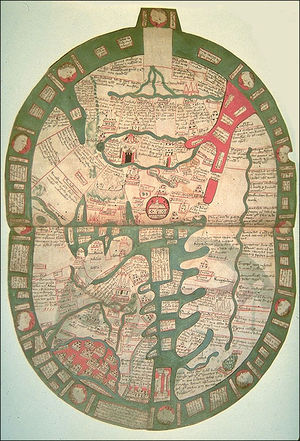 Map of the world from the Polychronicon. Britain is the red blob at the bottom left (east is at the top).

The Polychronicon is a famous medieval book written by Chester monk Ranulf Higden. Higden (c. 1280 - c. 1363), was an English chronicler and a Benedictine of the monastery of St. Werburgh in Chester, wherein he lived, it is said, for sixty-four years, and died at "a good old age", probably around 1363. He is believed to have been born in the West of England, took the monastic vow, at Chester in 1299, and seems to have travelled over the north of England. The book is commonly styled "Polychronicon", although the original title is "Ranuiphi Castrensis, cognomine Higdon, Polychronicon (sive Historia Polycratica) ab initio mundi usque ad mortem regis Edwardi III in septem libros dispositum".

The work is divided into seven books, in imitation of the seven days of Genesis, and, with exception of the last book, is a summary of general history. Written in Latin, it was translated into English by John of Trevisa (1387), and printed by Caxton (1482), and by others. It is the last major "Chronicle" and follows in the tradition of the "Chester chronicle". During Mediaeval times it was the standard work on general history, and more than a hundred manuscripts of it are known to exist. The Christ Church (Oxford) manuscript states that Higdon wrote it down to the year 1342; the manuscript at Christ's College, Cambridge, states that Higden wrote to the year 1344.

The book is full of fascinating insights as to what was known at the time. For example, Higden mentions that the Earth is round, because it casts a round shadow on the moon during an eclipse. Sometimes his geographical knowledge is good at other times bad:

Polychronicon and the English language

Higden (who was writing in latin) comments that "there are as many languages as there are different peoples in England", that school children were forced to speak/write French and non-nobles tried to learn/speak French to improve social standing. Higden goes so far as to express suprise that the York dialect cannot be understood by people of the South, and claims that the mixing with foreigners (Danes?) is responsible for that – also the distance from the royal court.

English was certainly under some pressure at the time: Henry IV (1399) was the first post-conquest King of England who was a native speaker of English and in 1401 – De heretico comburendo – was an act of parliament which forbade translation of the Bible into any vernacular, including English. However the Polychronicon was translated into English by John of Trevisa in 1387 and printed by Caxton in 1482. Trevisa made a few changes in his translation and added comments, for example that while French was the dominant language in teaching (grammar school), that changed after the Plague (1348) and that by 1385 all teaching in grammar schools is conducted in English. This led, acording to Trevisa, to the obvious result that English children would learn faster than before. Thus, it has been argued, that at a time when English readers were denied easy access to an English Bible, Trevisa's translation of the universal history given in the Polychronicon provided English readers with accessible biblical paraphrases. This contributed to religious and other debate among the laity. 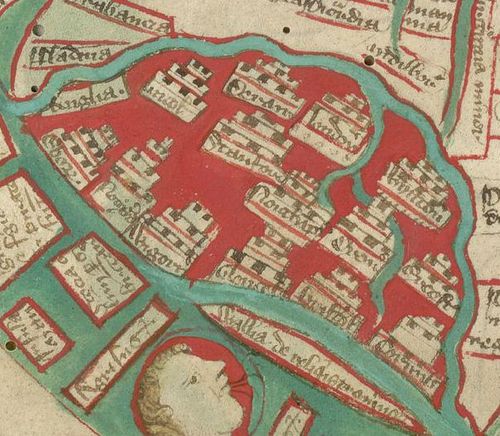 Map of Britain from the Polychronicon. Chester is not shown but Bangor is.

The book contains at least two hidden messages. If the first letters of the chapters which make up book one are selected and arranged in sequence they spell out a phrase in latin:

Ranulf actually draws attention to this "acrostic" in his book where he writes: "There is another City of Legions of this name, where the present chronicle was finished, just as the head letters of this first book make clearly accessible". Another hidden message is found in chapter 34, where the first letters of successive words spell "Ranulphus".

Perhaps there are yet more hidden messages in the book... 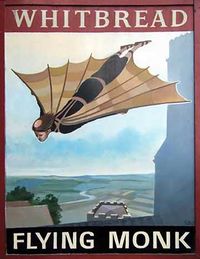 Higden refers to a story of a flying monk named Eilmer from Malmesbury Abbey, Wiltshire, who launched himself from the Abbey's tower with a set of home-made wings. According to the story, he glided "more than a furlong" (a furlong is just over 200 meters), before panic set in and he crashed to the ground. Higden gets the name of the monk wrong, and calls him "Oliver", which means that his supposed landing spot is known as "Oliver's Lane" (and is precisely where modern calculations based on wind currents place his likely landing spot). The gliding flight would have lasted about 15 seconds. Eilmer/Oliver apparently survived the crash with two broken legs, gave up aeronautics and wrote several works on astronomy. These are now sadly lost, as is the pub which once stood nearby - the "Flying Monk". 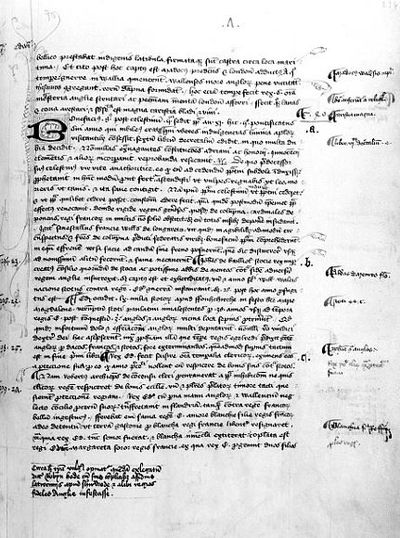 The page from the Polychonicon with a note about Robin Hood at the bottom.

Higden is quite disparaging about the existence of Arthur, pointing out in no uncertain terms that not only is Geoffrey of Monmouth full of inaccuracy (he is), but that there is no support from other sources. Ranulf writes:

This section of the book was the subject of considerable comment by the "translator" John Trevisa. Being Cornish, Trevisa disagrees with Higden over Arthur and occasionally, as elsewhere, changes the text to suit his own position.

In his description of the City of Chester, Ranulf makes passing mention of the supposed "retirement" of Harold to the Hermitage on the banks of the Dee.

Given that Ranulph Higden's Polychronicon, was written in c. 1342, Higden was one of the very first chroniclers who believed in the red-hot poker murder of Edward II (1327), which John Trevisa translated into English as:

See the Earls of Chester for more on this.

A recent find places Robin Hood in Edward I's reign, thus supporting the belief that his legend is of 13th Century origin. A translation of the short inscription, which contains only 23 words in Latin, reads:

Curiously, the inscription, which is believed to have been added in about 1460, was found as a marginal note in a copy of Higdon's "Polychronicon".

Solving the mystery of the Identity of Aelfgyva in the Bayeux Tapestry? 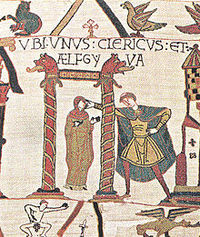 Aelfgyva in the Bayeux Tapestry

There is a "mysterious lady" (Aelfgyva) in the Bayeux tapestry - who may be Aldgyth - (this has never been confirmed) and who may hint at some scandal well known at the time. Looking at the tapestry in detail, it can be seen that the woman is depicted as being with a tonsured cleric, who is either slapping her face or stroking her cheek (the woman appears to be smiling). The priest is in a peculiar pose and just below the two figures is an obviously naked man in a very similar pose. The image is labled "ubi unus clericus et Aelfgyva" ("where a cleric and Aelfgifu"). Looking at the family tree for the English players in this particular drama, it is clear that Aelfgifu (it means "elf-gift") was either an incredibly common name in the late Dark Ages, or that it was some form of title of rank. 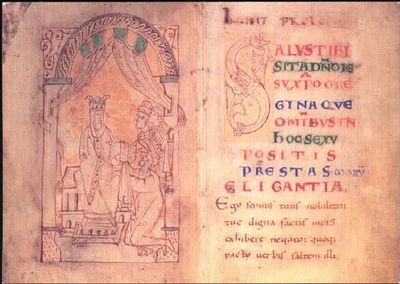 Encomium Emmae Reginae or Gesta Cnutonis Regis is an 11th-century Latin encomium in honour of Queen Emma of Normandy. It was written in 1041 or 1042 probably by a monk of St Omer. Compare the pillars in this illustration with those in the tapestry -the illustration shows Queen Emma of Normandy receiving the Encomium Emmae Reginae from the author (kneeling), with her sons Harthacnut and Edward the Confessor in the background. The illustration is found in the extant 11th-century copy of the Encomium. 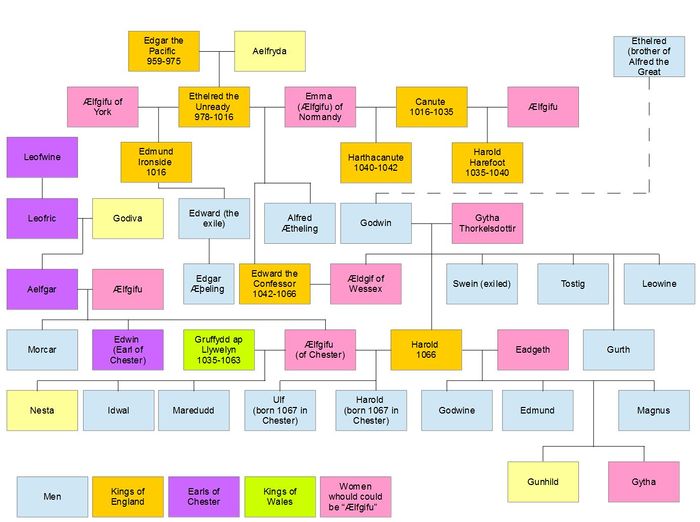 The real "Game of Thrones" this family tree of the Kings of England from Edgar the Pacific to Harold, shows how the Earls of Chester inter-married with the Welsh and English Kings. The chart also shows the possible candidates for the mysterious Ælfgyfa in the Bayeux Tapestry.

Higdon has his dates mixed up and interestingly the part shown italicised has been altered at a later date. Higdon sets his story in 1043, and it was not until 1051 that Robert of Jumièges became Archbishop of Canterbury and Earl Godwin was forced into exile. The priest involved in the scandal appears to be Ælfwine, the Bishop of Winchester from 1032 to 1047. According to an account in the twelfth century Quadripartitus Ælfwine was responsible together with Earl Godwin of Wessex, for inviting the future king Edward the Confessor to return to England in 1041, and in 1042 Ælfwine witnessed a charter of Harthacnut's together with Edward, Godwin, and Edward and Harthacnut's mother, Emma. Ælfwine died in 1047 and was formerly a royal priest in the court of Cnut before being made Bishop of Winchester in 1032. Emma, through her marriages to Æthelred the Unready (1002-1016) and Cnut the Great (1017-1035), became the Queen Consort of England, Denmark, and Norway. She was the mother of three sons, Edward the Confessor (King of England), Alfred, and Harthacnut (King of England), as well as two daughters, Goda of England, and Gunhilda of Denmark.

What actually happened on 16th November 1043, was that Edward the Confessor, accompanied by Leofric (of Chester), Godwin (of Wessex) and Siward (of Northumbria), travelling from Gloucester, made a surprise visit on his mother, Emma, in Winchester:

The 'Translation of St.Mildrith' by Goscelin provides the answer as to why this happened:

So there were at least two possible scandals "as men supposed", one with Stigand, Bishop of Winchester (1047-1070) and another with Ælfwine, Bishop of Winchester (1032-1047). There is still some confusion over dates as while Anglo-Saxon Chronicle Manuscript C states that "Soon after this Stigand was deprived of his bishopric; and they took all that he had into their hands for the king", Stigand (born around 990 so perhaps just a little younger than Emma, who was born c985) was only deposed in 1070, and his estates and personal wealth were confiscated by William the Conqueror (Stigand was imprisoned at Winchester, where he died without regaining his liberty). The Bayeux Tapestry has not been dated with any certainty, but one likely date lies between 1070 and 1077, in time for the opening of Bayeux Cathederal.

The fictional detective Richard Dutton in one of the The Chester Mystery Novels ("Deadly Rosary") believes that he has "solved" the mystery of who the woman and the cleric, with his theory that around 1003 Emma and Stigand had a liason (whereas in fact Stigand would have been far too young at the time - Ælfwine would have been old enough).

Moreover, while both the tapestry and Norman sources named Stigand, the (then excommunicated) Archbishop of Canterbury, as the man who crowned Harold, possibly to discredit Harold's kingship; English sources suggested that he was crowned by Ealdred, Archbishop of York and favoured by the papacy, making Harold's position as legitimate king more secure.