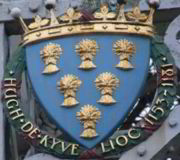 Arms of Hugh de Kevelioc on the Suspension Bridge.

Hugh of Kevelioc (born either 1141 or 1147), 3rd Earl of Chester was also known as Hugh le Meschin. He succeeded to the titles of Vicomte d'Avranches and Earl of Chester on 16 December 1153. He joined the revolt against King Henry II in 1173, was captured and deprived of his Earldom, but was then restored in January 1177. He died in 1181, leaving a young heir (Ranulf de Blondeville) aged 9.

Ranulf de Blondeville, (born 1172) who succeeded as the 4th Earl of Chester
Maud of Chester (1171-1233), married David of Scotland, 8th Earl of Huntingdon as featured in Walter Scott's "The Talisman", and grandfather of Robert Bruce
Mabel of Chester, married William d'Aubigny, 3rd Earl of Arundel
Agnes of Chester (died November 2, 1247), married William de Ferrers, 4th Earl of Derby
Hawise of Chester (1180-1242), married Robert II de Quincy
A daughter, (whose name is unknown), whom some say was briefly married to Llywelyn the Great of Wales. There is some controversy here.

Hugh is also said to have had a (some claim illegitimate) daughter, Amice (Amicia) of Chester, (there is some some complicated history here) who married Ralph de Mainwaring (Justice of Chester). The Cholmondeleys of Cholmondeley "trace their ancestry to William Le Belward, Lord of a moiety of the Barony of Malpas, who married Tanglust, the natural daughter of Hugh Kevelioc" - it isn't clear which daughter is meant. A mandate from King Henry the Second to Hugh Earl of Chester and "M the Countess" enjoins them without delay to give to the Abbot and Monks of Gloucester the rents which Ranulph Earl of Chester gave them in the mills of Oldney and of Tadwell:

The original from which the above is transcribed is in good preservation with a fine impression of the Great Seal appended thereto a small part only having been broken off. Its date is certainly in the early part of King Henry's reign as is tested at Worcester by Thomas a Becket then Archdeacon of Canterbury the King's Chancellor. The date of the mandate is fixed somewhere between 1155 and 1163 - most probably sealed in the year 1158 when the King was at Worcester and there crowned. It is probable that the "M Comitissa" was Matilda the mother of the Earl who survived until 1189 and who might have had some interest in the Earl's lands in Oldney in right of her dower. If the Countess was not that Matilda but the wife of Hugh Earl of Chester it would supply evidence that Hugh Earl had a prior wife to Bertred - a point of considerable interest in reference to the well known controversy around the legitimacy of Amicia. The bastardy of Amicia was asserted by Sir Peter Leycester and her legitimacy maintained through a protracted pamphlet war by Sir Thomas Mainwaring of Peover. Sir Peter Leycester denied that Earl Hugh had any other wife than Bertrade, mother of Ranulf of Blundeville and of the four daughters who became coheirs of their brother.

Hugh de Kevelioc, (1141/1147 – June 30, 1181), was the 3rd Earl of the second creation of the Earldom (and so the fifth to hold the title). He is thought (by some) to have taken his name from Kevelioc in Monmouth as his birthplace. Cyfeiliog was a small territory (cantref) in medieval Wales. The river Dyfi intersected the northwestern corner of it and formed part of its western border. Machynlleth and Tarfolwern are nearby towns. Others think that he was born in, and took the name of, Cyfeiliog in Merionethshire or Meirionydd, Wales. Hugh's arms are: "Azure, six garbs, or, three, two, and one" - this is six golden bundles of corn (garbs) arranged in rows of three two and one on a blue (Azure) background.

The Chronicle of the Abbey of St. Werburg, at Chester gives his birthdate as 1147 and also notes that the previous year:

This creates something of a problem for those who have argued that Hugh was born in north Wales. It is more likely that Hugh'd father Ranulph De Gernon suspected that some such thing could happen and had sent his wife to Powys and his ally Madog ap Maredudd.

History records the donation of lands at Ticknall:

The first of these dates is very dubious given that Ranulph De Gernon did not die until 1153. Hugh is also said to have granted his manor of Budworth together with a half share interest in the forestership of Mara (which included Delamere Forest) to Robert Grosvenor at some time in the 1150s. The bounds of Grosvenor's bailiwick were described in 1361 as being:

Being born in 1147, Hugh would have been a minor at the time and one wonders just how real the grant of the forestership was!

Chester Castle was temporarily in royal hands during the minority of Earl Hugh (1153–62). It appears that it was managed by Simon fitz William and Robert Montalt of Mold. Robert had lost his castle at Mold when Owain Gwynedd had captured the castle for the Welsh in the year following its construction in 1147 and would go on to capture Rhuddlan in 1150. Mold would not be regained until 1167.

In 1157, Henry II received the homage of Malcolm IV, king of Scots, in Chester before invading north Wales. Malcolm was not only King of Scots, but also inherited the Earldom of Northumbria, which his father and grandfather had gained during the wars between Stephen and Empress Matilda. Henry II refused to allow Malcolm to keep Cumbria, but instead granted the Earldom of Huntingdon to Malcolm, for which Malcolm did homage.

With the support of the Prince of Powys Madog ap Maredudd and Owain's brother Cadwaladr ap Gruffydd (whom Owain had recently stripped of his lands in Ceredigion), Henry led an army consisting of one-third of the knights in England and an unknown number of infantry into northern Wales and sent a fleet (led by Henry FitzRoy) to capture Anglesey to cut off Owain's supplies. Owain's army made camp at Basingwerk to block the route to Twthill at Rhuddlan. Henry split from his main army with a smaller force that would march through the nearby Ewloe woods (in modern-day Flintshire) to outflank Owain's army. Sensing this, Owain is said to have sent a large army led by his sons Dafydd ab Owain Gwynedd and Cynan ab Owain Gwynedd into the woods to guard Owain's main force from Henry's outflanking army. Owain split his army and decided to personally lead an extra 200 men into the Ewloe woods to reinforce his sons' armies. When Henry's outflanking force advanced into the wood, they were ambushed by Owain's forces and cut down. The remainder of Henry's force retreated, with Henry narrowly avoiding being killed himself (having been rescued by Roger, Earl of Hertford).

Henry managed to escape back to his main army alive. Not wishing to engage the Angevin army directly, Owain repositioned himself first at St. Asaph, then further west, clearing the road for Henry II to enter into Rhuddlan "ingloriously". Once in Rhuddlan, Henry II received word that his naval expedition had failed. Instead of meeting Henry II at Deganwy or Rhuddlan as the king had commanded, the English fleet had gone to plunder Anglesey and the Norman troops on board had been defeated by the local Welsh soldiers (Henry FitzRoy himself had also been killed). Despite Owain's success in the Ewloe woods and the success of his men on Anglesey, Henry had still succeeded in securing Rhuddlan, and so Owain felt obliged to make peace with him. Owain surrendered the lands of Rhuddlan and Tegeingl to Chester. He also gave Cadwaladr his lands back in Ceredigion, which re-cemented the alliance between the two brothers. Owain also agreed to render homage and fealty to Henry. Henry II had achieved the objective of his campaign with Owain’s forced submission.

Owain ap Gruffydd of Gwynedd was in open rebellion by autumn 1164 and sent several letters to Henry's main rival, Louis VII of France, asking to be considered amongst Louis' "faithful and devoted friends". The Welsh annals spoke of a concerted effort by the Welsh princedoms, which were more usually in competition with each other, to "throw off the rule of the French [i.e. the Angevins]". The "Chester Annals" record that in 1164 "justice was done on the Welsh hostages". In 1165 Henry II used Shrewsbury as his base for another invasion of Wales. This was largely unsuccessful and the only real clash was the "Battle" of Crogen (a small skirmish). His attempt to deal with Owain and Rhys a failure, Henry returned to Shrewsbury and there ordered the blinding of twenty-two hostages held since the 1163 treaty, two of whom were Owain's sons. Henry then visited Chester to meet the ships which he had ordered to harry Gwynedd. 19th century and later accounts of the "battle" rely heavily on David Powel's 1584 Historie of Cambria, an unreliable historical source.

Shortly afterwards Chester appears to have been involved in a further attack, for in 1170 (or 1169) Hugh II was reported in the Chester Annals to have built a mound at Boughton out of the heads of Welshmen killed at the 'bridge of Baldert', possibly Balderton (in Dodleston), south of Chester, with the mound actually having been built at Broughton. 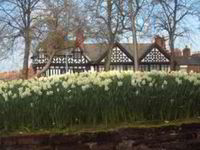 The said hospital for the sick stood close by the site of St Giles Cemetery.

Revolt against the king

In 1173, (aged 26) Hugh stuck with family tradition and joined the baronial Revolt of 1173-1174 against Henry II. A leading figure in this revolt was Henry II's heir "Henry the Young King". Henry fell out with his father in 1173. Contemporary chroniclers allege that it was due to the young man's frustration that his father had given him no realm to rule, and that he felt starved of funds. The rebellion seems however to have drawn strength from much deeper discontent with his father's rule, and a formidable party of English and Norman magnates joined him.

The civil war (1173–74) came close to toppling the king, and he was narrowly saved by the loyalty of a party of English court aristocracy and the defeat and capture of the king of Scotland. Hugh had chosen the losing side and lost Chester Castle and the rest of his lands when captured and imprisoned. While shuttled about somewhat he was finally placed in confinement at Caen after the Battle of Alnwick (1174) when William I of Scotland) was defeated.

The "Annales" records it as follows:

The same events are recorded in the Chronicle of Roger of Hoveden:

So captured at Dol, Hugh is now placed in prison in Falaise.

Hugh was brought over to England...

...but later shipped back to France and placed in confinement, first at Caen, and afterwards at Falaise. Hugh is mentioned (as an exception) in the treaty which ended the 1173-1174 revolt.

However, he had his estates restored in 1177. 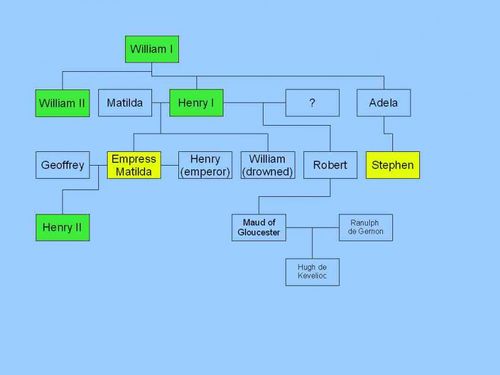 After his release from prison in 1177, Hugh may still have harboured ambitions to make Chester the centre of an independent principality. During Hugh's time stories arose that hermits living in the Hermitage (Anchorite Cell) had claimed to be Harold II of England and the German Emperor Henry V. In both cases this is most unlikely, but, in both cases, such claims would cast doubt on Angevin legitimacy:

It is possible that Hugh was also the source of the myth that Lucy of Bolingbroke (his grandmother) was descended from the House of Leofric.

Hugh died 30 June 1181 (aged 34) at Leek, Staffordshire, England. There was another revolt around Henry the following year, but, on 11th June 1183, Henry the Young King died and that uprising, which had been built around the Prince, quickly collapsed and the remaining brothers returned to the their individual lands.