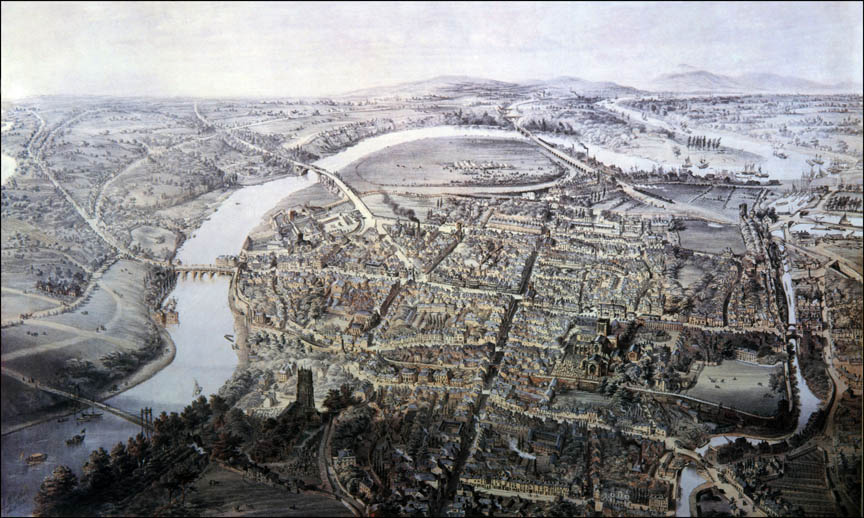 A view of Chester from a balloon : for the weather.. Other notable features of Chester include: Chester castle, the City Walls, The Rows, the Hermitage, the Amphitheatre, the Cathedral, the partly ruined church of St Johns, the Minerva Shrine, Suspension Bridge, Old Dee Bridge, Grosvenor Bridge. Grosvenor Museum and Military Museum. For those more interested in archaeology on the edge there is even Heronbridge a place which, like many, has stories yet to tell. 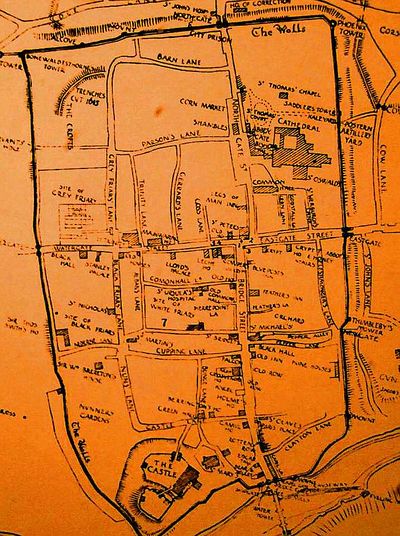 This old map of Chester has been enhanced with a bit of modern technology - mouse over for more detail on points of interest around the walls! Chester is covered by OS Explorer Map 266 or OS Landranger Map 117.

Chester is fortunate to have been "mapped" many times. To save space we have not included copies of all the maps here (they tend to be large). One of the early maps is unique in that it is the first image of the ground actually taken from the air, by a balloonist in 1785.

For a great tool to compare maps throughout the years, Cheshire Archives and Local Studies has their Cheshire Tithe Maps Online website. This is a comprehensive overview of the Cheshire area with 9 maps to compare and search.

For a wide selection of relatively modern maps see this collection at the National Library of Scotland. Climate maps can be found on the Weather page. 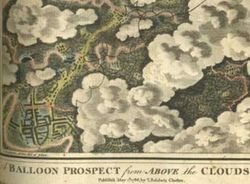 Thomas Baldwin's 1785 aerial view of Chester which can be seen, together with the River Dee in the corner of this engraving based on his sketch.

Maps on this site

Some other maps of Chester

The Gough Map of Britain is one of the earliest maps to show Britain in a geographically-recognizable form. The map is named after one of its former antiquarian owners, Richard Gough (1735-1809) who bequeathed the map to the Bodleian Library in 1809. The text on the Gough map is the work of at least two scribes: the original 14th-century scribe and a 15th-century reviser. Some of the map’s writing dates it to around the 1370s, placing it in the latter part of King Edward III’s reign. However, there is also evidence of later over-writing of some of the map’s place-names which demonstrates a continued interest in and use of the Gough Map into the first thirty years of the fifteenth century. Chester is shown as a large city compared with others, being portrayed as having City Walls and a church with a tall spire - possibly St Peter - the present church dates from the 14th, 15th and 16th centuries, with modifications in the following three centuries. Formerly the tower of St Peter's had a steeple which was removed and rebuilt in the 16th century, taken down in the 17th century, then rebuilt and finally removed "having been much injured by lightning" about 1780. 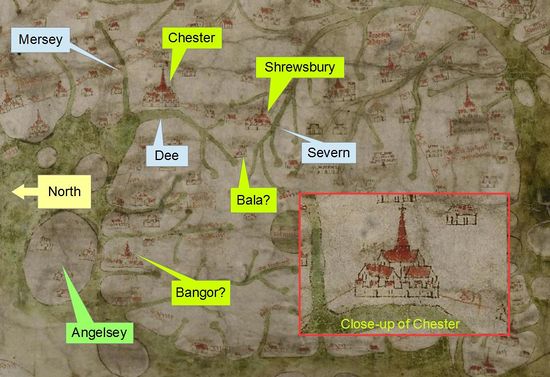 A part of the "Gough Map" (c.1370), showing Chester as a major city, and probably St Peter's church.

The map is oriented with north to the left and east at the top, unlike modern maps (this was typical of maps at the time). The part reproduced below shows Wales, with Chester in the center of the upper left quadrant. The River Dee can be seen, as can the road from Chester to Shrewsbury. 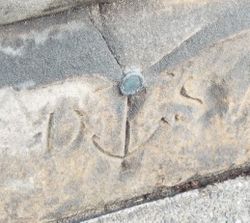 Copper "benchmark" set into one of the pillars of the Bridgegate in Chester.