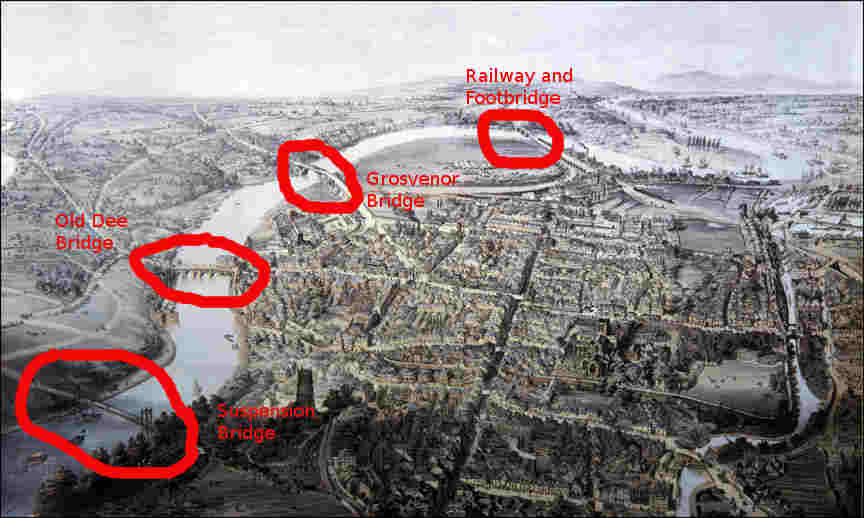 A view of Chester from a balloon : for the weather... The four bridges are the Suspension Bridge, Old Dee Bridge, Grosvenor Bridge and the River Dee Railway Bridge - in the McGahey "balloon" view from 1855.

The Old Dee Bridge in 2014. From this angle it only seems to have six arches, because the seventh is often dry at low water.

The present bridge over the River Dee, which lies just outside of the Bridgegate, replaced earlier medieval bridges, probably of timber, and is believed to stand just upstream of the site of a Roman bridge (see Roman Chester), which probably had stone piers carrying a timber carriageway. The remains of the bases of the Roman piers are said to be visible in the river bed just downstream of the present bridge.

The precise date at which construction of Roman Chester began has been the subject of much debate. According to one version, sometime around 74 CE, the then governor of Roman Britain, Sextus Julius Frontinus constructed an "auxiliary fort" at Deva Victrix (Chester). The placement of this fort (at the lowest ford of the Dee) appears to have been a strategic move by Frontinus with the intent of both blocking the route of any routed British trying to escape to the north, and to guard against help arriving from the Brigantes and other northern tribes. Frontinus was a noted engineer as well as being a governor, and author of De aquis urbis Romae, a history and description of the water supply of Rome. It is not known whether he was involved in providing Chester's water supply from the springs at Boughton to the Roman fort, but is is known that at this time lead (such as is used for plumbing) was traded with the Deceangli of north Wales.

The Roman bridge did not survive the early Dark Ages, and by the time of Æthelflæd had been replaced by a ferry, which traveled from Handbridge to the Shipgate.

A panorama showing the view along the Old Dee Bridge, and how narrow it is as seen from the Bridgegate - traffic can only cross in one direction at a time. This is high tide in a rainy week, so the weir is almost completely submerged.

By the Norman Conquest at the latest a bridge appears to once again have been in place. The Doomsday Book specifies as follows: 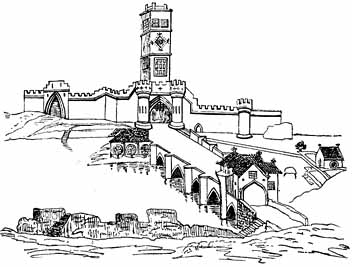 A print from Simpson's "The Walls of Chester", based on a drawing by Randle Holme (now in the British Museum). The large gate to the left of the bridge (shown here with a pointed arch) is the Shipgate.

Various replacement bridges were constructed over the years. One such bridge collapsed under a flood in 1227. In 1279/80, 1297 and 1353 the then bridge was again swept away. Legend says that when King Edward I crossed over the then wooden bridge on his way to fight the Welsh, he decreed that if a stone bridge was not constructed he would sack the city - a major threat but probably necessary given that the people of Chester do not seem to have wanted to spend their own money on the bridge. However, Edward was not a king to be ignored and a first stone bridge was built shortly thereafter. An alternative version of events is that the citizens of Chester managed to convince the king that they were not responsible for the bridge: 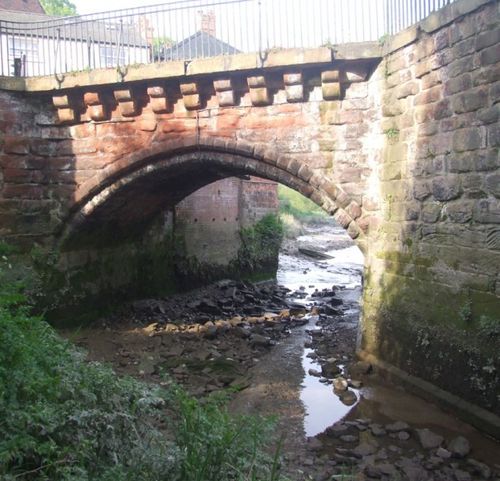 The south-most arch of the Old Dee Bridgeis often dry at low water.

The present stone bridge was probably built about 1357 when the Black Prince ordered the mayor and citizens of Chester to make: "...with all speed their part of the bridge of Dee... in the same manner and style as the remainder of the bridge which has been newly made." Work had been started on this as early as 1346 but was stopped due to the plague. In 1351 the Dee Bridge was "in such plight that no one [could] pass over it". The builder of the 1351 bridge is believed to have been a certain Henry de Snelleston, mason and surveyor to Edward the Black Prince.

In 1387 it was again described as "ruined" in pleas from financial relief to Richard II. Letters Patent granted to the citizens on 25 July 1387 state: “Know ye that of our special grace and at the supplication of our lieges, the Commonalty of our town of Chester, and for consideration that as many have been drowned in the water of the Dee since the bridge has been destroyed and broken. And also, because the same town for that reason is very greatly impoverished as we are informed, we have granted to the fabric and repair of the aforesaid bridge all the profits of the Passage of the said water at Chester and the Murage which used to be granted there for the walls, to be received until that bridge is rightly and reasonably completed”. 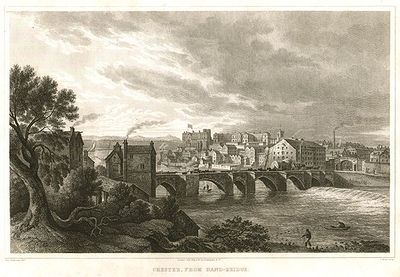 In 1499, the south end of the bridge was taken down and rebuilt, and it was probably then that the tower for defence was added. The tower was let to one Henry ap Res together with the gatehouse in 1524-5.

AS late as the middle of the 16th century, the rule that no-carts with iron bound wheels should cross the bridge was strictly enforced. In 1773 the Old Dee Bridge was described by Thomas Pennant as 'very narrow and dangerous' as the volume of traffic continued to rise, yet no other bridge was built for almost 60 years. The bridge was eventually superseded by the building of the Grosvenor Bridge a little further downstream in the 19th Century. The bridge was widened, upstream, by Thomas Harrison in 1826, to provide a footway, partly corbelled.

Looking at the Randle Holme sketch, there is a smaller gate to the right of the bridge. The Braun and Hogenberg map and the Smith Map both also show this, and it appears to be a gate which opens directly onto the River Dee. Thomas Bradshaw's description of King Edgar's trip up the Dee differs from the usual legend as it has Edgar starting his journey on the city side of the river:

The Bridgegate tower in Randle Holme's sketch differs from descriptions given elsewhere, as this is the original tower which was destroyed in the Civil War.

There are also what appear to be ruins of a building in the foreground of Randle Holme's sketch. Could these be the ruins of the "palace" once said to be in Edgar's Field? - unfortunately not, these are almost certainly the ruins of a chapel belonging to the nuns of St. Mary's Priory. 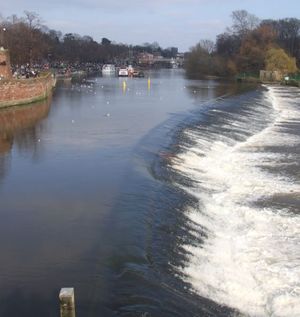 The weir looking upstream from the Old Dee Bridge in 2014. The Suspension Bridge can be seen in the distance. The gate in the weir is at the base of the post in the foreground.

For canal boats wanting to pass between the non-tidal section of the River Dee and the Shropshire Union, there is a tricky weir passage at the City end of the bridge that can only be made at certain states of the tide (you will also need to book passage through the locks of the Dee Branch - which appear to be out of service at present (2014)). But if you must, see [1]. This is the United Kingdom's only example of a "weirgate".

BUT BEWARE! In 1996 the narrowboat "Towy", trying to pass upriver at high tide, was "caught on a log" in the weirgate and slipped sideways onto the weir. With the tide receeding, the boat was firmly beached on the weir and risked breaking its back before it could be shored up until the next tide.

As of 2014 there was some discussion as to to whether a better barge passage should be made at the location of the Salmon Steps, but this would make little sense unless the river-lock near the Boatyard was repaired. If both improvements were made than it would be possible for barges to leave the Canal, pass up the River Dee below the weir and get onto the upper river above the weir from where they could range at least to Farndon. 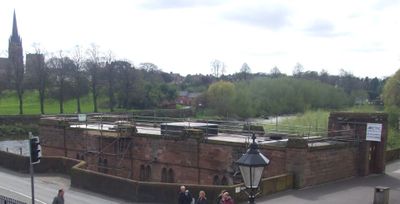 The hydro-electric plant in 2014

The City end of the bridge was developed into a hydro-power station in 1913, with 3 turbines, which by 1948 were generating up to 40% of Chester’s power. United Utilities now own the site but are due to move out in April 2015. The plant stands on the site of the Dee Mills. In April 1895 the Dee Mills were purchased by Chester Corporation, only to sustain serious damage a month later in the last of a long series of fires, after which they were closed. The buildings were used for storage until they were demolished in 1910.

The bridge is built of the local red sandstone and is notable for the variation in the span of the arches, the widest being 18 m (60 ft). The size differences are due to the variable quality of the river bed. One of the arches is semicircular, two are segmental and four are pointed. The bridge's piers have broad cutwaters and most have recesses, or a widening of the trafficway, above them. Towards the Handbridge side of the river the occasionally dry final arch was once supplied with a drawbridge, the tower of which, together with the bridge was painted by Turner.