The River Dee (Welsh: Afon Dyfrdwy) flows 110 miles from it's source to Hilbre Island. Travelling through Wales (mostly) and England (briefly) and also forming part of the international border between them, the river rises in Snowdonia, flows north via Chester and discharges into an estuary between Wales and The Wirral. The lower reaches of the river are unusual in that comparatively little water occupies so large a basin. One theory of a contributory factor to the large basin is that once the River Mersey and/or the River Severn flowed into the Dee. A more recent theory, however, is that the estuary was not wholly formed by water, but in part by ice being pushed southwards by the pressure of an ice-cap over the Irish Sea. The total catchment area of the River Dee up to Chester Weir is 1,816.8 square kilometres (701.5 sq mi). The average rainfall over the catchment is estimated to be 640 millimetres (25 in) yielding an average flow of a touch under 37 m³/s at Chester weir. Annual average local rainfall varies from 2500 mm in the mountains above Bala to 600mm near Chester. The wide variation in dry-weather flow of Lower Dee tributaries, the substantial channel and floodplain routing of former interglacial lakes and the effects of wind in an upper course which is aligned SW/NE - along the direction of the prevailing wind make the River highly unpredicatable. Tidal range in the estuary is 6 metres according to tide tables, but often exceeded, by almost a metre, when low pressure weather systems are present, and at times the canalized section can produce a spectacular bore which proceeds up-river to break upon Chester weir.

The Dee is nowadays one of the most regulated rivers in Europe, it supplies more water for public supply than the whole of the English Lake District and two-thirds of the river's water is abstracted before the River Dee reaches the weir at Chester. The natural flow of the River Dee during most summers is insufficient to sustain this rate of abstraction, so a series of reservoirs have been constructed to store excess water available in wintertime and release it back into the River Dee during drier months. This system of low-flow regulation was first used by Thomas Telford at the beginning of the 19th Century in order to guarantee a supply of water to the Ellesmere Canal. Telford constructed sluices at the outlet of Bala Lake to control the flow of the Dee downstream so that there was always sufficient water to supply the Canal where it started at Horseshoe Falls. However regulation is not simple - flood peaks from Corwen take five and a half hours to reach the Cheshire plain at Erbistock, and it can take up to two days for low-flow regulation releases (or previously, floods) from Bala Lake to reach Chester weir. This delay in water reaching the Chester weir from relases at Bala can have consequences, as unpredictable peak tides can overflow the weir bringing saltwater into the freshwater Chester-Farndon reach, leading to freshwater fish kills in that part of the river. 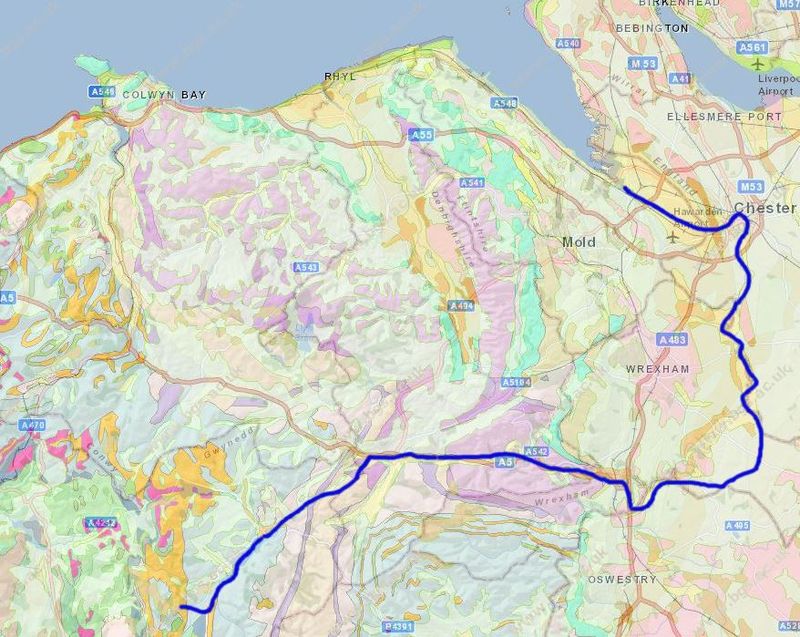 The River Dee - roughly 110 miles from source to sea seen here at the "Geology of Britain Viewer".

The history of the Dee has many interwoven layers. There is the geological record, from the Ordovician rocks at its source to the modern deposits in the estuary. There is a historical record starting with it's use as a trade route in pre-Roman times. A path of myth which places the young Arthur at it's source. And an industrial tale bringing gold, stone, wool and water downstream as the railways and canals crept ever upstream towards it's head. We make no apology for mashing-up these strands for the Dee is a river to be explored in its many moods on many levels.

A slight word of caution is needed for pedants - much of the history of the River Dee is clouded by mystery and superstition. We have tried to give an even balance of sources, but cannot claim to be the "only source of truth".

We have divided the story of the river and its journey from source to sea into three parts: 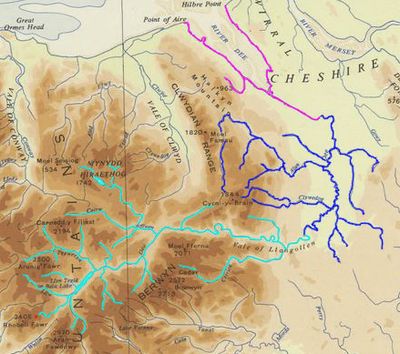 The River Dee - its Upper Reaches (pale blue) from the source (red dot) pass eroding and tempestuous through Wales; the Middle Reaches (dark blue) slow and meander about along the borders, and the Lower Reaches (purple) are estuaraine waters that dip to the sea dumping sediment from upstream.

From the source of the river at springs on the slopes of "Black Hill" Dduallt above Llanuwchllyn in the mountains of Snowdonia, through Wales, to its emergence from the Vale of Llangollen; here the young river flows swiftly and the majority of erosion takes place, cutting relatively narrow, steep-sided, "V"-shaped valleys, often with "interlocking spurs". Here, Victorian geologists fought out their battles to trace the history of rocks through time and a young Charles Darwin made his first explorations of the deep past.

Through England and the Welsh borders to Chester; the "middle aged" river slows down and the valley becomes broader. Both erosion and deposition of material takes place, leading to the formation of meanders and occasional changes of course which have in cases left pockets of England "stranded" on the Welsh side of the River Dee. The border of England and Wales is in part determined by the pattern of the River's floods - no-one wants to invade the other and then be cut off from retreat by a flood. For only a short length (from Poulton to Saltney, near Chester) is the Dee a wholly English river.

Back in Wales, below Chester to Hilbre Island and the sea; the river is now in "old-age" and while there is little erosion a lot of material is deposited. In the case of the River Dee this deposition has had a significant impact on the economic development of Chester, effectively turning a major port into a relatively quiet backwater and eventually killing off port activity almost completely. The estuary is important for birdlife and has been designated both as a "Site of Special Scientific Interest" and under the "Ramsar Convention" on "Wetlands of International Importance", especially as waterfowl habitats.

The story of the River Dee Geology begins near the remains of what was once a spectacular volcano, erupting from the "Isles of Avalon" over 450 million years ago and ends at the haunting Hilbre Islands on the fringe of the Irish Sea and a shipwreck of volcanic sulphur just to close the circle.

Many more links are included on the separate pages for the Upper Reaches, Middle Reaches and Lower Reaches of the river.

The link under the image will open the book.