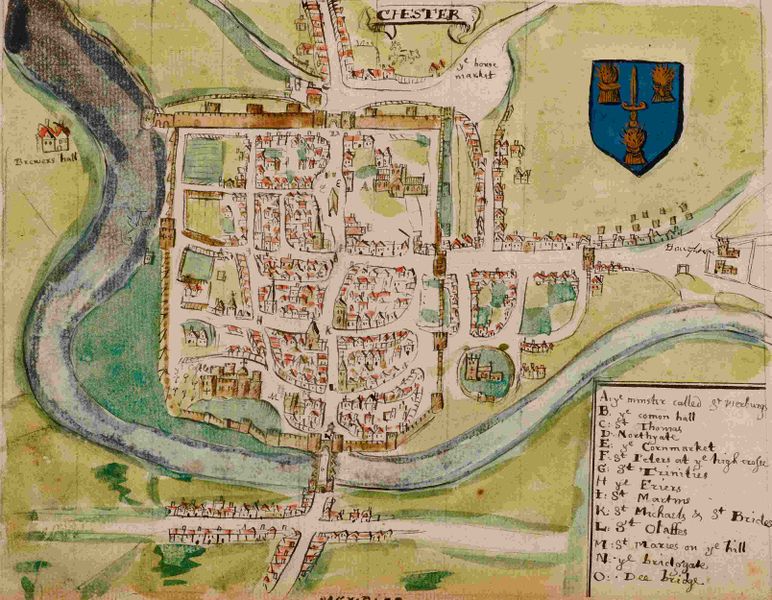 Smith's map of 1585/8 shows only a few changes from the Braun and Hogenberg map of 1581. One notable change is that the arch under the spur-wall leading to the Watertower appears to have dried. 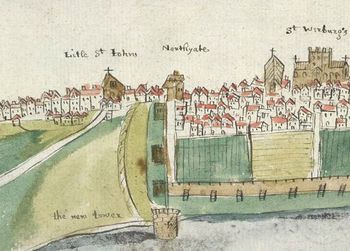 Detail from Smith's sketch showing the Walls from the Northgate down to the Watertower.

William Smith’s (1588) plan of Chester from his “The Particuler Description of England. With the portratures of certaine of the cheiffest citties & townes” (Source: British Library, Harley MS 1046, fol. 173)

William Smith, (not to be confused with the 18th century William Smith “Father of English Geology” - also a famous map-maker), was an antiquarian and "Rouge Dragon" at the College of Heralds/College of Arms. This was an institution that specialized in genealogical work, increasingly more so during the Elizabethan age as the gentry class rose in importance. The "Rouge Dragon" is the name of one of the Pursuivants, a heraldic officer attendant on the heralds, often attached to a particular nobleman, named so because of their badges.

In 1588 Smith completed "The Particuler Description of England. With the portratures of certaine of the cheiffest citties & townes". This work consisted of drawings of English cities and towns in a traditional bird's eye view style, and combination drawings amalgamating the bird's eye view and plan. He is also credited with a drawing of Chester, dating from 1585 and possibly a preparatory drawing for the map. It shows Chester as a walled city. The prominent coat of arms reveals Smith's heraldic interests.

In the year 1602-03 William Smith anonymously published maps of Chester, Essex, Hertfordshire Lancashire, Leicester, Norfolk, Northamptonshire, Staffordshire, Suffolk, Surrey, Warwickshire and Worcester. These were probably engraved in Amsterdam and were intended to form sheets of a new atlas. After the publication of Saxton’s county maps in the 1570s, cartographers attempted to improve on Saxton’s atlas and replicate its success. Unfortunately for Smith, another cartographer, John Speed, was also preparing county maps at that time and competition proved too great, Speed being the victor.