A panoramic view of the "Earl's Eye" at Boughton where the River Dee turns into the first curve of the great S-bend at the "Chester Gorge".

The name 'boughton' or 'bluestone' may have originated from the placement of a "blue" boundary stone (now lost) alongside the road similar to the Gloverstone which stood outside Chester Castle. St Giles Cemetery and the nearby Gallows Hill are relics of the darker side of Chester history. In 1170 the Earl of Chester Hugh de Kevelioc was reported in the Chester Annals to have built a mound at Boughton out of the heads of Welshmen killed at the 'bridge of Baldert', possibly Balderton (in Dodleston), south of Chester. It is not clear whether this is a reference to Boughton or Broughton, and the second of these makes more sense if Baldert is Balderton.

Other historical landmarks include the Watertower, Leadshot Tower and the Steam Mill. Boughton is described as follows in Thomas Pennant's "Journey from Chester to London" (1811). 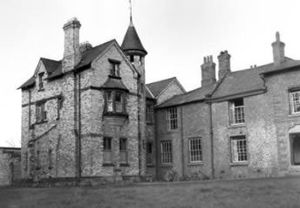 Boughton Hall when it was a children's home.

The original house on the site is thought to have been built before 1579. This house was destroyed by fire in 1643 during the Civil War. The house was then rebuilt with an E-shaped plan. The area to the left of the entrance porch was filled in about 1800. The fireplace in the entrance is dated 1655 and possibly records the rebuilding of the Hall after the fire. Boughton Hall is now much altered and includes eighteenth and nineteenth century additions, and some later twentieth century alterations. A wing was added in the 19th century. It was owned by the Currie family from the 15th century. William Currie (fl 1768-1805) graduated MD Edinburgh on September 12, 1770, with a thesis 'De Phthisi Pulmonali', and became in the same year a Member of the Medical Society of Edinburgh. In the Medical Register for 1780 he is given as one of the three Physicians to the Chester General Infirmary; the other two being Drs Denton and John Haygarth. The house was occupied by Major-General William Vesey Brownlow in the late 19th century - he commanded the 22nd Regimental District (the Cheshire Regiment) from 1889 to 1894. It was later used as a children's home, and then as an office for Barnardo's. During the early 2000's it was boarded-up and in danager of becoming derelict. It was, however, redeveloped as the focal point of a retirement village in 2008. The Hall is located within what was previously the village of Nether Boughton. The whole village suffered the same fate as Boughton Hall during the Civil War. The Chester garrison turned the inhabitants out of their homes and razed the entire village to the ground after their buildings were used to provide cover for Parliamentary forces.

Boughton Lodge, a largely seventeenth and eighteenth century building; and the Manor House, which is early early eighteenth century, remain today; ensuring that the ancient core of Great Boughton is still visible. Boughton Lodge, in particular, had a strong connection with the development of the community. The Rev Philip Oliver (1763-1800), an early methodist in Chester, retired to Boughton Lodge, which had been the residence of his widowed mother. Oliver was a descendant of John Bruen - the Chester Puritan who was noted for smashing-up various local village crosses. He was a friend of the Rev. Thomas Charles of Bala, and he and other Welsh Calvinistic Methodist ministers who could preach in English assisted in the work. As his congregation grew, he converted the coach house (no longer surviving) into a place of worship which became known as Oliver’s Chapel. When the estate changed hands, it was bought by Captain Currie of Boughton Hall who became annoyed at the tolling of the bell and gave notice to quit. Chapel Lane provides a reminder of the Reverend Oliver and his non-conformist chapel. The trustees then bought the Octagon Chapel, Foregate Street, Chester, which had been vacated by the Wesleyans in 1811, and removed the cause from Boughton to Chester. In 1864 the Octagon Chapel was conveyed to the London & North Western Railway Company and demolished, being in the line of construction of the new City Road between Foregate Street and Chester Station. The replacement chapel, the City Road Chapel, was somewhat smaller than the old Octagon, but is still there.

Boughton has always been an important as a source of much of the city's Water Supply - the waterworks is still here. In Roman Chester water from the springs at Boughton was carried into Chester along a series of clay, lead or elm pipes, the trees being hollowed out. Later, water was piped to a cistern at One Bridge Street by Chester Cross. Many rivers in industrial areas became too polluted by effluents to be usable for water supply, but the City of Chester provides a notable exception to this, having directly abstracted Dee water (at least) since the first Chester Waterworks Company was formed in 1826. This was possible because of the relatively few troublesome effluents in the River Dee catchment upstream of Chester. Nowadays, water is still drawn from the River Dee and treated at the waterworks. The Dee has a complex regulation system to ensure that a continuous flow of water is provided. The balance of Chester's drinking water comes from a borehole at Plemstall: an artesian well, 350 foot deep with an 8 inch diameter pipe. 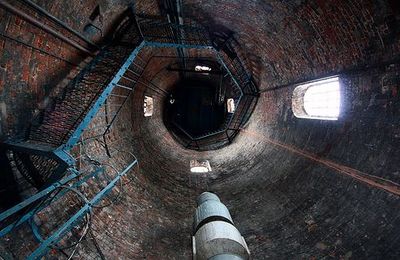 Decidedly dodgy-looking ladders and steps inside the lead-shot tower at Chester.

In 1800 Walkers, Maltby & Co. set up a Leadworks by the then 'Chester and Nantwich' canal. As the proprietors were not freemen of Chester, the concern was initially threatened by a reassertion of ancient restrictions relating to who could run a business in Chester. It was only able to avoid these as a few of the owners were freemen of the City of London. The works made white and red lead for paints and primers, and had a shot tower. In such a tower, molten lead is allowed to fall like rain and forms spherical drops which are solidified as they plunge into a vessel of water. This process was invented and patented by William Watts of Bristol, in 1782 after a dream of leaden rain. By 1812 a rolling mill for sheet lead and machines for drawing lead pipe had been added. The site was well-placed for manufacturing lead articles from ores mined, smelted, and refined in north Wales and Spain, and their onward distribution to the industrial Midlands and North-West. The lead shot produced in Chester was used extensively in the Napoleonic Wars. Because the lead was smelted elsewhere the toxic effects of a local lead smelter were greatly reduced. At 168 feet (41.2 m) the Leadshot Tower is possibly the tallest surviving structure of it's type in the world. 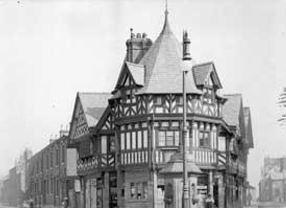 Boughton Post office in 1920 - note the position of the drinking fountain, it was originally in the middle of the junction rather than in the corner of the cemetery mound..

The Salvation Army used to refer to Boughton as a "Stronghold of Satan" and in the early 1880's it was their habit to march through it on Sundays, after gathering at St Giles Cemetery and ending their march at the Pavilion roller-skating rink near Chester Station. On the 26th March 1882, this led to a serious riot and Chester was shaken by what came to be known as "Black Sunday", during which the local Salvation Army ignored orders and marched through the Irish Catholic district around Steven Street, where it was attacked by a mob of "decidedly criminal appearance", according to the local press. The ensuing trial saw the magistrates threatened with "Revenge and Death" (according to the Salvationists). Trouble had been brewing for some time, as "An Angry Citizen" had written a long complaint letter to the Chester Courant which begins as follows: