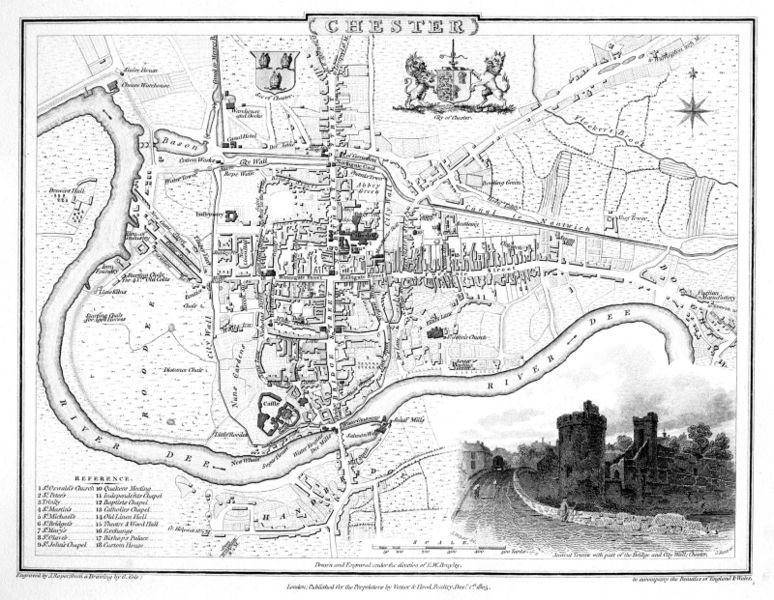 This 1804 map shows not much building since the last map, so still much open space was left within the City Walls.

Some points to note are: 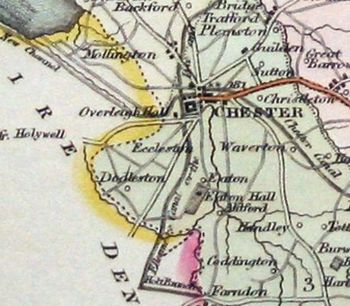 The canal south from Chester was never built

One thing that the map does not feature is the then proposed branch of the Canal running southward. This (never built) branch is shown in Langley's New Map of Cheshire as found in Langley's "New County Atlas of England and Wales" (1818). The proposed canal would have probably been an expensive "Canal Mania" disaster for its investors. It is only possible to speculate how the never built canal would have crossed the Dee at Chester.

Due to the constraints placed on the canal by its incomplete design, the Ellesmere Canal struggled financially throughout its operating life as an industrial waterway. In 1813, the Ellesmere Canal company merged with the Chester Canal to form the Ellesmere and Chester Canal Company and the canal shown in the 1818 atlas was never built. This business was then merged with the Birmingham and Liverpool Junction Canal in 1845. A year later the canal was taken over again by the formation of the Shropshire Union Railways and Canal Company.

A detailed nineteenth-century map of Chester with an inset view of the towers and city wall that was published in the atlas, "The British Atlas; Comprising A Complete Set Of County Maps, Of England And Wales; And Plans Of Cities And Principal Towns" in 1810. The map was drawn by G.Cole and engraved by John Roper for publication in "The Beauties Of England And Wales", that was published in parts, from c.1804. Such was the success of the publication that the maps were re-used in other publications.