This plan was surveyed and drawn by Alexander de Lavaux, engineer and surveyor. As well as naming the owners of many houses, the plan includes informative details such as the "North Gate May Pole" and the "Water Engine", which was mentioned in Daniel Defoe’s diary record of his second visit to the city: 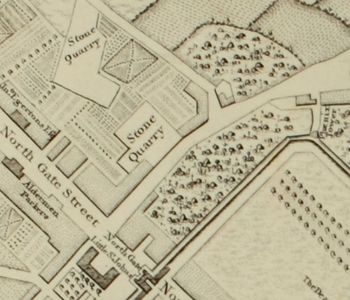 Detail from the Lavaux Map of Chester showing the area around Northgate before the Canal. Lavaux does not show any gaols on his map, but he may have personal reasons for that.

Still much open space was left within the City Walls in 1745, although this map only shows the major buildings.

Some further points to note are:

A high resolution scan of this map can be purchased from the Chester Records Office (on CD). A Hi-res version of the map is also available on-line.

This is a rare, important plan of Chester and one of the earliest large scale plans of the city. It is one of many published in the middle of the eighteenth century which importantly record cities before rapid industrialisation. The copper-engraved plan is by the surveyor Alexander De Lavaux and one auction site states of him "about who little is known other than his self styled description as an Engineer". The engraving is attributed to Richard Parr (fl.1723-51) who worked especially closely with John Rocque the great publisher of many large scale maps. The detail is remarkable with, as was the fashion at the time, notable town resident’s buildings being identified as are all of the roads including even the Maypole on Northgate Street. Many of the houses marked on the map still exist and research has revealed much of the story of their occupants. For example, the house of Robert Foulques at what is now 25 Castle Street (in 2019 the office of the local MP) has an interesting history.

Lavaux's past before Chester was not without incident. Alexander De Lavaux was born in Berlin and had at his entrance into Prussian service had the rank of lieutenant and engineer. In 1729, at the age of 25 he was employed by the Dutch "Society of Suriname". With an appointment as cartographer in Suriname he was given the rank of ensign. He made ​​several campaigns against the "Maroons", and produced a first map of the Suriname River. In 1731 the Directors of the Society of Suriname discovered that the existing maps were not of sufficient quality to indicate the condition of the land and the location of the plantations. By May 1734 Lavaux had been working for over two years on a new and accurate map of Suriname. In 1725 he visited Amsterdam, was promoted to captain and went back to Suriname. He did not get on with the new Governor (Gerrit van de Schepper?) and in 1741 deserted without warning on an English ship to St. Eustatius and then to the British colony of Saint Christopher (now St. Kitts). At the end of 1741 he was extradited by and put in prison at Fort Zeelandia. It took until June 1743 for the court-martial verdict (which demanded a death penalty). Lavaux meanwhile was diagnosed as insane (presumably due to prison conditions). The sentence was commuted in 1744 to expulsion from the military service and banishment from Suriname.

Within two years Lavaux must have traveled to Chester and begun work on his map. Lavaux's reasons for coming to Chester remain unknown, but the map is dedicated to George Cholmondeley, who was Vice Admiral of Cheshire at the time, and appears to have Dutch ancestry through his mother.