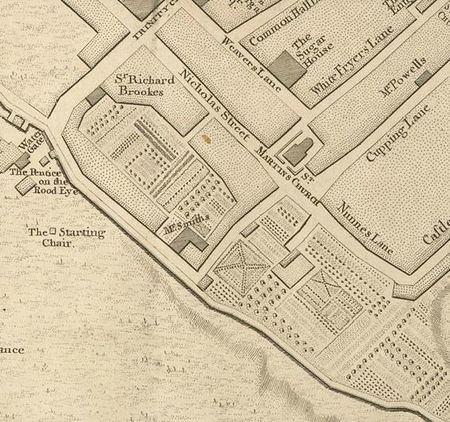 The Lavaux Map (1745) does not show Greyfriars, but does show the house of the Smiths.

The Franciscans were settled in Chester by Albert of Pisa, the minister of the English province, in 1237 or 1238. According to Thomas of Eccleston their settlement met with considerable opposition and it seems that Alexander Stavensby, bishop of Coventry and Lichfield (1224-38), feared that there would be insufficient alms forthcoming from the citizens of Chester to support both the Franciscans and the Dominicans, who were already settled there. Early in 1240 Henry III gave his approval for the construction of a house for the Grey Friars in Chester; the site was to the north of Watergate Street, opposite the Dominican convent and conveniently placed for the collection of alms from travellers entering Chester through the Watergate.

The Franciscan friary occupied a walled, rectangular site of approximately seven acres to the north of Watergate Street; it was bounded on the west by the City Walls and on the east by Linenhall Street and was entered by a gate-house at the southern end of Linenhall Street. Notably this is some distance from the present Greyfriars, which is actually a lane cutting through the former site of the Blackfriars. In 1245 the friars were permitted to take as much stone as they required from the castle fosse and in the following year they were allowed to breach the city wall in order to bring in stone and timber for their building operations. Royal generosity and support in the early days of the establishment of the house were sufficiently remarkable for the friars to address the king as their founder in a petition of 1331. 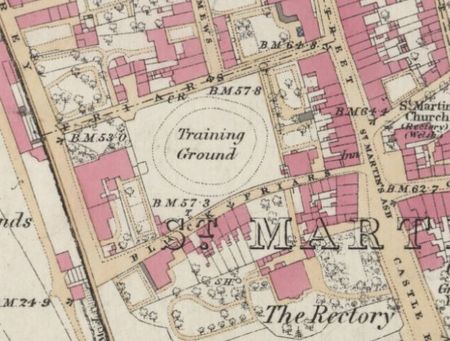 The area around Greyfriars and Blackfriars from the 1873 OS map.

The last warden, Dr. William Wall, a local man, improved the water supply of Chester by beginning to build the conduit at Boughton. William Wall surrendered the house to Richard Ingworth, bishop of Dover on 15 August 1538. There were then seven friars living in the convent, and it was the poorest of the three Chester friaries. The furnishings of the church, vestry, kitchen, brewhouse, and bulting house were sold for £3 4s. 8d. and two alabaster tables, service books, glass, iron, and a 'poor' pair of organs in the church were sold for a further £2 10s. The total of £6 3s. 8d. raised by the sale did not meet the debts of £12 8s. 11d.

Between 1745 and 1789 and stated to be c1780 but with features which look mid C18; some alterations. Brown brick in Flemish bond to west and east, but irregular bond to south; grey slate roof with 2 ridges at right angles to Grey Friars.

In 1864 Edward Hodkinson the architect lived at 2, the mews.

In 1745 the principal houses on the site of the Blackfriars friary can be seen to be from the Lavaux Map to be those of Mr. Smith in the south-west corner, and Sir Richard Brooke on the Watergate Street frontage west of Stanley Palace. Between lay extensive gardens reached by a lane perhaps on the line of the medieval alley. Smith's house, later known as Grey Friars House, which still survives. It is a low two-storeyed building dating largely from the late 17th century but incorporating timber framing perhaps of the 16th and massive external trusses. Brooke's house was entirely replaced by Watergate House, built in 1820 by Thomas Harrison for Henry Potts.

The Smiths lived here for quite some time. They were descended from an alderman of Chester who bought the manor of Hough under Henry VIII. The family first sat an MP for the county in 1545, but maintained their interest in the borough.

Sir Lawrence Smith (1515/16-82), of Chester and Hough, Cheshire (a small village and township 3 miles south-west from Crewe). Lawrence Smith may have been the goldsmith of that name mentioned in the Chester records in 1543. The son of a civic dignitary noted for his integrity and philanthropy, he was himself to offer to pave the Blackfriars at his own expense (it was next to his house: and either it, or Greyfriars was known as "Smith's Walk"). His election was as the first knight known for Cheshire following its enfranchisement in 1543 and he probably owed it to his possession of two qualifications: his mother was a Brereton and he had gained a knighthood in the Earl of Hertford’s Scottish campaign of 1544. Ten years later (1558) he was re-elected first knight of the shire to Mary’s fourth Parliament. His Membership of the next two Parliaments as one of the citizens for Chester coincided with his mayoralty. He was mayor four times in all 1540-1, 1558-9, 1563-4, 1570-1. 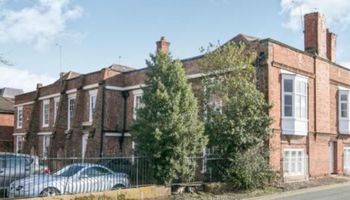 Sir Thomas Smith, 1st Bt. (c.1622-75), of Chester and Hatherton (a village and township on the road from Nantwich to Audlem and Market Drayton), Cheshire, was a Chester MP (1661-75), partly at the same time as Robert Werden (see: Bath Street). Smith’s father (Sir Lawrence Smith's grandson, Thomas) was returned for the City in both elections of 1640. Smith snr. left Westminster before the Civil War and sat in the Parliament of Oxford.

Smith himself, one of a family of twenty-two, served as a cornet of horse under Prince Rupert, and was a captain in the Chester garrison when it surrendered. He was comprised in his father’s composition, which was reduced to £3,350 on a net income of just over £900 p.a., in consideration of a favourable certificate from the parliamentary commander Sir William Brereton, as well as debts of £2,500 and losses by plunder of £1,150. Smith and his father were included in the list of Cheshire Royalists drawn up by Roger Whitley in 1658, but took no active part in conspiracy. He was created a baronet at the Restoration, and was returned for Chester to the Cavalier Parliament. In the opening session he was appointed to the committees for restoring the temporal jurisdiction of the clergy, for preventing mischief from schismatics, for the corporations and uniformity bills, and for the bill of pains and penalties. After this his activity in the House diminished, and he was named to only 35 committees in all. John Ratcliffe, however, reported him ‘ready and useful’ to assist Chester in its dispute with the county over taxation in 1667, and he was given a vote of thanks by the corporation. In his only recorded speech he defended a customs official against charges of extortionate fees on 28 Mar. 1668. He was listed among Ormonde’s friends in the House, but was not reckoned among the court party by either Government or Opposition in 1669-71. He defaulted on a call of the House in 1671, and was named to his last committee in the same session. He died on 22 May 1675, and was buried at St. Paul’s, Covent Garden. He left debts of over £8,000, and in 1678 a private Act was obtained for the sale of lands to the value of £400 p.a. Even Hatherton had to be alienated, and the family became extinct early in the 18th century without sitting in Parliament again, the Chester MP seats having been largely monopolised by the Grosvenors.

Greyfriars House was saved from demolition in the 1970's.