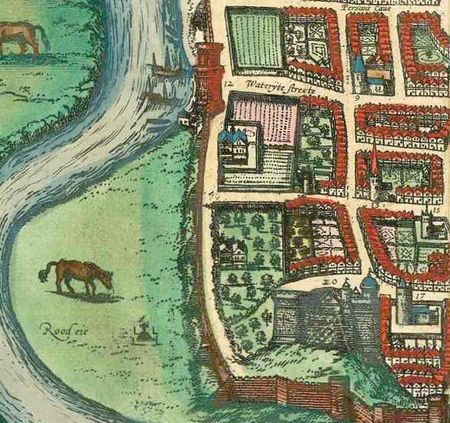 The Braun and Hogenberg map of 1581 shows "the crofts", previously occupied by friaries as largely devoid of buildings. Nuns Road runs north-south down the middle of the map. The extremely large horse on the Roodee is not to scale.

Nuns Road goes from Watergate Street towards Chester Castle along the inside of the City Walls. It ends at the approach to the Grosvenor Bridge. It is one of the few "roads" within the City Walls: along with "City Walls Road", "Pemberton Road" and "Grosvenor Road" (the continuation of Grosvenor Street). Previously, the name was applied to a part of Nicholas Street which later became Castle Esplanade. The name arises because of the location of the House of Benedictine nuns of St Mary in Chester (see: Nicholas Street). Victorian maps indicate that Nuns Road once only ran from the Watergate as far as Blackfriars, but was extended with infill fom the demolition of Harrison's gaol in the early 20th century bringing the ground level up to the wall walk. However the Braun and Hogenberg map of 1581 shows it going as far as Chester Castle.

Braun and Hogenberg shows two buildings on Nuns Road. The upper of these might be the house of the Smith family (see Greyfriars for more info) while the lowermost may be the remains of St Mary's priory.

Although within the medieval walls, much of the area between the walls and Nicholas Street remained as open fields until the 18th to 20th centuries. Its history has also been associated with major institutional uses (the friaries and the Infirmary), giving it a different history and character to most of Chester. In Roman times the ground sloped westward to the river bank and was eventually cut into three terraces to support buildings and agriculture. What is almost certainly the retaining wall for for these terraces supports the City Walls along a part of Nuns Road. This is often referred to as the "Roman Quay" although it would appear that the actual quay would have been at the far end of a long pier which extended out across the Roodee - even given sea level changes since Roman times the "Roman Quay" is simply too high to be of any use.

Along the City Walls there is the odd inscription to be found by the observant passer-by. One says "1 Mile": from where exactly this is measured is not indicated - there is another such stone by the phoenix tower. One stone is inscribed with the date "1793" - presumably the date at which repairs to that part of the City Walls was completed. There are also the remains of quite a few "crenels" - stones with curved edges, which gave a "battlement" appearance to the walls.

About 50 yards short of the south end of Nuns Road (just where the newwe stonework leading to the Grosvenor Bridge approach starts), is a stone with an inscrption set into the City Walls of which the visible part reads: 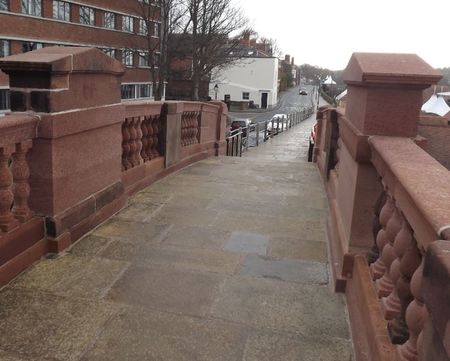 Nuns Road after the restoration of Watergate.

This was placed to record the repair of the walls: Simpson was Mayor of Chester in 1674 and Poole and Taylor were Aldermen, probably both Murengers (those charged with the responsibility to maintain the City Walls).

House. Early C19, fully restored post-1991. Lined-out plaster on brick, with hipped roof with slate covering behind low parapet. 2 storeys, 2 bays, above a painted stone plinth. The wall behind the house is of brick with lower courses of stone which may date to the time of the friaries. The house was once occupied by a woman who owned a very, very, very large number of cats.