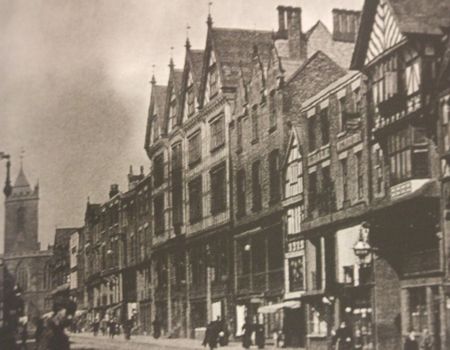 Edward Hodkinson (1840-1909) lived in Mainwaring House Watergate Street until its demolition in 1851. He was no fan of the half-timbered revival writing in the 1890 volume of the Journal of the Archaeological Society that:

He then goes on to remark of the Old White Bear Inn in Lower Bridge Street - where a Georgian front had been painted in black and white to imitate timberwork:

He wrote "Notes on the Architecture of Basingwerk Abbey, Flintshire". Kelly's Trade directory gives his business address as 9, Abbey Street. He died, aged 69 (in 1909) after he had been in failing health for some time, and thus unable to practise as an architect since the 1860's, or to take an active part in the proceedings of the Archaeological Society, or in other pursuits in which he was keenly interested.