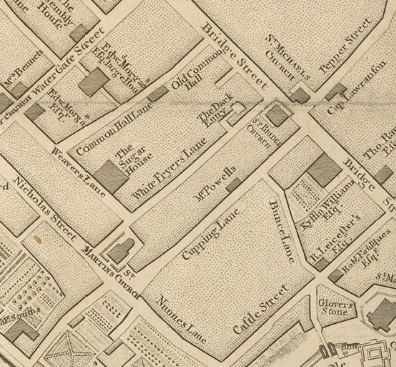 The Lavaux Map shows the location of St Martin at the then junction of Nicholas Street with Nunnes Lane.

Nicholas Street forms a part of the inner ring road linking St Martins Way and Grosvenor Street. It was once called Blackfriars Lane from Watergate Street to Whitefriars and Nunnes Lane from there down to Castle Street. St Nicholas Church, in ruins by the 16thCent. stood on the south side of Nicholas Street.

The Dominicans (Blackfriars) were settled in Chester by 1237 or 1238, receiving a site in the Crofts of 5.5 acres bounded by Watergate Street to the north, the later Nicholas Street to the east, Arderne Lane (later Blackfriars) to the south, and the City Walls to the west. In its final form the precinct was divided by a substantial internal wall running east-west, presumably between the conventual buildings and the orchards and gardens. The main entrance was by a gate in Nicholas Street giving on to an alley which crossed the precinct to a lesser western gate.

A chapel dedicated to St. Nicholas apparently stood on the site in the 1220s, and was perhaps taken over as the friary church, which had the same dedication. (fn. 39) The church lay in the centre-west of the site with the main claustral range to the south. A further range of buildings lay to the north, perhaps an outer court entered from the alley. 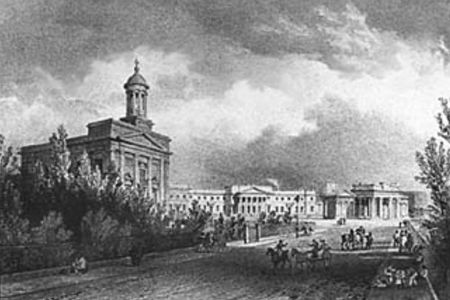 The second St Bridget's Church. Built 1826, demolished 1891. Chester Castle can be seen in the background.

The conventual buildings may have been complete by 1276, when licence was obtained for a piped water supply. The first church, a simple rectangle, was retained as the choir when in the late 13th or early 14th century a large nave with aisles, c. 30 m. long with seven bays, was added perhaps together with a transept and north-west tower. Later a central tower was built over the crossing, the nave was shortened by one bay, and the north-west tower was removed. Those alterations were perhaps made in the mid 14th century, but floor tiles from the central tower are unlikely to pre-date 1400. In the later 15th century the crossing tower was removed and the choir widened, perhaps with the addition of an aisle. The nave was partially demolished in the early 16th century and foundations for a replacement were begun probably c. 1520. Work had apparently ceased before the Dissolution with the construction of a temporary retaining wall. Numerous interments took place in the nave and aisles throughout the Middle Ages. They included some children and a few women, but were mostly men, placed in the best positions at the eastern end of the nave aisles.

The friary was dissolved in 1538. In 1543 the main buildings were leased to Thomas Smith and Richard Sneyd, and in 1544 the entire site was sold to John Cocks. In 1561 it passed to the Duttons and thereafter presumably to the Warburtons, reputed builders of the late 16th-century timber-framed house at the northeast corner of the precinct afterwards called Stanley Palace. The site later passed to the Stanleys of Alderley, who retained at least the eastern half until c. 1780. By the early 17th century most of the friary buildings had been demolished, though the gate in Nicholas Street survived.

The Nuns of St Mary 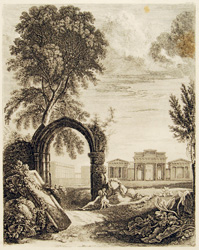 The George Cuitt engraving from 1827. Showing the remains of the priory near to Chester Castle.

The earliest known charter connected with the House of Benedictine nuns of St Mary dates from about the year 1150, though it is known the nuns were in Chester before that date, possibly at another site. The charter says:

On the site, to the north west of the castle and to the west of Nicholas Street (at about this time "Nunnes Lane"), were to be built the conventual buildings and a church dedicated to St. Mary. The croft in question may have included all of the land bounded by the Castle out-works to the south the later Nicholas Street to the east, Arderne Lane (later Blackfriars) to the north, and the City Walls to the west. It is clear that the earl was dealing with a body of nuns already in existence and the original founder was possibly Hugh, son of Oliver, a citizen of Chester, who held the crofts from the earl. The community is, however, unlikely to have been in being for long before the site was granted and Ranulph De Gernon was traditionally regarded by the nuns as their founder. Little is known about the size or state of the house in its first 150 years. It was evidently regarded as an attractive place for burials and in an agreement with the monks of St. Werburgh's and the canons of St Johns the nuns promised not to entice any of the inhabitants of Chester to be buried with them and to share the offerings of those who chose to be buried within their precinct. 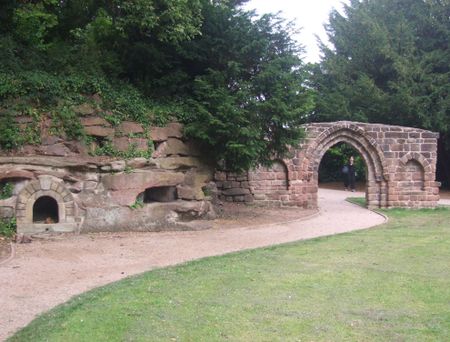 The archway from St Mary's convent (much restored) now stands in Grosvenor Park.

As a priory worth less than £200 the house should have been suppressed under the Act of 1536, but in the following year the prioress paid £160 for exemption. On 21 January 1540 Elizabeth Grosvenor and the convent surrendered the house and all its possessions to the Crown. The prioress was assigned a pension of £20, three of the senior nuns pensions of £4, seven other nuns and one of the novices pensions of between £2 13s. 4d. and £2, and the two other novices pensions of £1 6s. 8d.; 12 of those pensions were still paid in 1556 and Elizabeth Grosvenor, 'sometime lady of the nuns', was still alive in the early 1570s. After the dissolution the lands of the nunnery were used to endow the new bishopric of Chester but the site was reserved to the Crown in the grant made to Bishop Bird in 1541. In 1542 it was granted to Urian Brereton, a groom of the royal chamber, and the Breretons of Handforth occasionally resided at 'The Nunnes'.

The buildings were damaged during the siege of Chester in 1645 by the owner, Sir William Brereton, and only a few ruins remained by the beginning of the 18th century. A century later the ruins were removed to improve the approach to the new shire hall and several stone coffins and fragments of windows and doorways were unearthed; the arched doorway, still standing in 1816, was removed c. 1840 to the house called St. John's Priory and later re-erected in Grosvenor Park - where it still stands. Excavations in 1964 before the County Police Headquarters was built allowed the exact dimensions of the church (58 by 43 feet) and the cloisters (55 by 62 feet) were established. Inside the church the foundations of four piers, indicating three central arches, were discovered and, on the evidence of some decorative floor tiles and other sherds, a 13th- or 14th-century date was assigned to the remains. 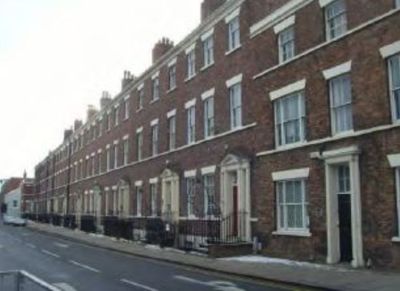 The Georgian terrace in Nicholas Street known as "Pill Box Terrace" - Joseph Turner designed a part of this.

Hughes writes of it: 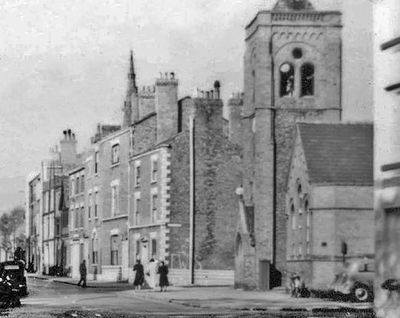 The Church of St Martin before demolition. All of these buildings along Nicholas Street were demolished when the road was widened.

On 27 April 1842 the district was united with that of Chester: St Bridget to form the combined district of "St. Bridget with St. Martin", which in January 1973 itself became part of a unified district for the city of Chester. St. Martin's closed in 1963 and was demolished to make way for the Inner Ring Road around 1969 - a nearby part of which is known as "St Martins Way".

When Grosvenor Street was cut diagonally across the City in 1825 to form the approach Harrison's new Grosvenor Bridge, St Bridget was demolished and William Cole (Harrison's pupil) designed a new church bearing the same dedication, which was erected close to Harrison's recently-rebuilt Chester Castle. It was restored in 1861 under the direction of James Harrison. Thomas Harrison had been buried in the churchyard, and in the 1960s, to make way for a traffic island on the new Inner Ring Road, Harrisons remains were transferred to Blacon Cemetery. In the process his monument was lost. 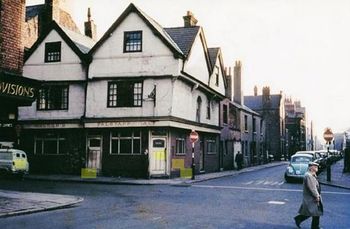 The Yacht and Nicholas Street before the road was widened by the creation of the inner ring road..

The north side of Nicholas Street is lined with modern buildings which replaced the older buildings demolished when the street was widened to create the inner ring road. At best these are rather indifferent and in the case of the tyre replacement centre, quite poor.

The south side is rather better, as the original buildings have largely been retained.

Designed by Joseph Turner, the Nicholas Street buildings date from 1780/1 and originally comprised ten town houses. The terrace became known as ‘Pillbox Promenade’ or ‘Pillbox Row’ because many were used as doctors’ surgeries but later the street became well known as a base for law firms. Some of these law offices have now been converted into residential apartments as there is a general tendency to move to open-plan offices and these buildings are unsuitable for conversion. Thers is also only limited parking (behind in Nicholas Street Mews). Number 18 is understood to have been used as a Temperance Hotel before the second world war. At a later stage the whole building became The Liberal Club until 1990 when the accommodation was reduced to the lower ground floor only, finaly closing in 2013. There has been proposal to convert it back into a luxury hotel.

The blue plaque on number 6 reads:

Set back from the road and across a car park is the pub and restaurant called "The Architect". "St Martin's Villa" was originally constructed around 1820 by Thomas Harrison as his own home. The land on which St Martin’s Villa was built was donated to the architect by the County in gratitude for his professional services’. He lived here from 1820 until his death in 1829 at the age of 85. Over the years it has been a parsonage, then police administration building. It was converted into a pub in 2012. The exterior of the older part of the building is lined stucco and brown brick with a grey slate hipped roof. There is little ornamentation to spoil the simple elegant lines. Inside, the cellars are part barrel-vaulted in brick, have flagstone floors and stone steps. The entrance lobby has a moulded plaster ceiling, and the open-string stair has 2 quarter-landings, shaped brackets, 2 slender stick balusters per step and swept rail with rose. Reputedly, the arch at the top of the stairs replicated the arch of the Grosvenor Bridge.

The castle-like Militia Buildings were built in 1861 and were used as married quarters for the families of troops serving at Chester Castle. They were demolished to make way for the "eye-sore" County Police HQ builtt 1964-1967 (and thankfully demolished 2006). The site is now occupied by the HQ building (58 Nicholas Street). A landmark office building in the centre of Chester with extensive views over the city centre and the Roodee racecourse, it was built in 2007. Current occupiers include Chester Council, a hotel, Knights LLP, Chester Racecourse and apartments.