While Thomas (c.1744-1829) is the more famous, James (1814-1866) was also a noted architect in Chester. The relationship between the two is not clear - James was not the son of Thomas, as Thomas and his wife Margaret Shackleton had three children who survived childhood; a son, John (who died in 1802), and two daughters. Given that Thomas was born in Yorkshire they are almost certainly quite unrelated. 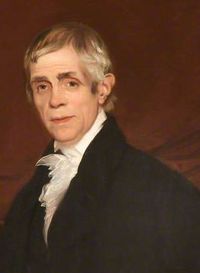 Thomas Harrison's portrait, 1820 by Henry Wyatt from the Grosvenor Museum.

Thomas Harrison (c1744-1829) was born in Richmond, Yorkshire, England, the son of a joiner, also named Thomas. His precise date of birth is not known, but it is likely that he was baptised on 7 August 1744. Little is known about his early life, other than he attended Richmond Grammar School, and it is presumed that he worked with his father. In 1769 he was sponsored by a local landowner, Sir Lawrence Dundas of Aske Hall, to join George Cuitt (later a landscape painter) to study in Rome, where he spent seven years, including a period at the Accademia di San Luca. 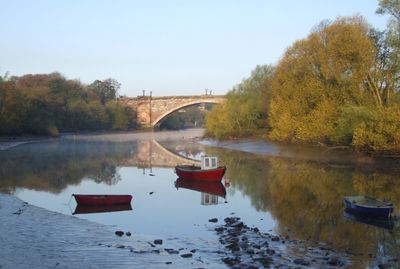 The Grosvenor Bridge. Although designed by Thomas Harrison, he did not live to see it completed.

While in Rome, his architectural drawings came to the attention of Clement XIV when, in 1770, he submitted a design to the Vatican for changes to the Cortile del Belvedere, a museum for antique statuary since Julius II moved his collection there in 1503. This was "favourably received but not in the end adopted". Three years later, in 1773, he entered the Accademia's competition to re-design the Piazza del Popolo. Harrison's design was again unsuccessful, but it was exhibited at the Royal Academy in 1777. Following the failure of this design to be accepted, he petitioned the pope, and was awarded gold and silver medals, and made Accademico di Merito. Some of the elements of his design for the Piazza del Popolo appear to have been re-used in his design for the courts at Chester Castle.

He was then commissioned by Clement XIV to alter the sacristy of St Peter's, but the pope died before the work started. Harrison returned to England in 1776, probably via France, as he made drawings of buildings in Nîmes and Paris. He produced designs for a bridge and a road in London, which were not accepted and he finally returned to Richmond in 1778.

In 1782 he won the first prize in a competition to design a bridge to cross the River Lune at Lancaster and to replace a medieval bridge. This was remarkable given that he had no real reputation at the time. After some minor amendments to the design, the foundation stone was laid in June 1783, and Skerton Bridge was completed in September 1787, at a cost of £14,000 (£1,550,000 as of 2014). The bridge was carried on five elliptical arches, and was the first substantial bridge in England to have a flat road surface - an impressive first major commission for the still young architect (aged 38) - the bridge became a model for a number of other more famous bridges, including the London Bridge which is now in Arizona.

Further work in Lancaster followed, but in January 1786, Harrison won the competition for major improvements to Chester Castle (and a fifty guinea prize): he was to work on that and related projects, for over thirty years, until 1815.

A panorama of Harrison's. modification of the Outer Bailey of Chester Castle. The Agricola Tower can be seen behind the buildings on the right but the gate leading to it is now kept locked. The Military Museum is in the building to the left. The neo-classical design is remarkably similar to that of Downing College in Cambridge by the architect William Wilkins (which was only completed in 1951). Wilkins career in architecture began in 1804 with his Greek-revival designs for the newly established Downing College. Wilkins' 1804 commission came after earlier plans in a Palladian style by James Wyatt had been rejected as "insufficiently classical". Wilkins arranged the college buildings around a single large courtyard. Construction of Downing began in 1807 (Harrison's design is earlier) and proceeded slowly, coming to a halt (due to litigation over the founders bequest) in 1821 with Wilkins' scheme still incomplete. Whether Wilkins was influenced by Harrison is impossible to say.

Harrison's last major work was the Grosvenor Bridge built between 1827-1833 in order to ease congestion on the Old Dee Bridge at Handbridge, which by the beginning of the 19th century was the only crossing across the River Dee in Chester. He retired before the work was completed, and died before it was opened.

Harrison spent the whole of his career in the northwest of England and, other than his houses in Scotland and his work in Oxford, his works were confined to Lancashire, Cheshire, Shropshire, Cumbria, Derbyshire, and North Wales. He was never a member of the Royal Academy or any other London-based institution, and only a rare visitor to London once his practice was established. Nevertheless, Charles Cockerell (later to become the president of the Royal Institute of British Architects) said of him in 1828 that he was "undoubtedly the noblest genius in architecture we have had". Sir Nikolaus Pevsner described him "as a local architect whose work is as good at that of any architect in London".

Harrison married Margaret Shackleton at Lancaster Priory in 1785. In 1795, Harrison moved with his family to Chester, where he spent the rest of his career. However, he must have had a connection with Chester prior to this as in the list of competitors for the bridge competition, he is described as "of Chester". The couple had three children who survived childhood; a son, John, who died in 1802, and two daughters. Harrison died aged 85 at his self-designed home, St Martin's Lodge, Chester, in 1829. He was buried in the churchyard of St Bridget's Church, Chester, but his remains were moved to Blacon Cemetery when the churchyard was cleared in about 1964. His estate amounted to £6,000 (£460,000 as of 2014).

James Harrison (1814-66) is thought to have been the son of a stonemason working in the Linenhall district of Chester, and like his father was a talented stonemason, having himself produced some monuments, including (unless it was executed by his father) one for a William Currie at St Mary on the Hill. Apart from some previous stone-work at the Cathedral (the screen behind the altar), the early work of his short life starts with a major commission at St Michael's, starting in 1849 when he almost completely rebuilt the church in a late Decorated style. Nothing is known about where he trained or with whom.

He also designed new churches in Gothic Revival style, including Holy Ascension Church, Upton by Chester and Holy Trinity Church, Watergate Street. Harrison also made alterations to other churches, including working on the tower of the Church of St Mary-on-the Hill. He designed the then Chester Savings Bank, and converted the medieval St Nicholas' Chapel into a concert hall.

Harrison was the first architectural correspondent of the Archaeological Society, and experimented with vernacular sources, as with 40 Bridge Street and directly across the street at 51-53. Despite his relatively few works, Harrison is considered to be a significant pioneer of the Vernacular Revival in Chester.

The Drill Hall on Albion St was built in 1868 as a training hall for the Royal Garrison Artillery and the Cheshire Rifle Volunteers. The cost of £2500 was raised by public subscription. Chester Drill Hall contained "a lofty and spacious room, 100 feet long and 60 feet wide". The Drill hall was demolished in 1983, but the facade has been retained on the front of what is now a block of flats.

Harrison lived with his parents near St Martin in the Fields throughout his life and is not known to have married. Harrison died in 1866, aged 52, with some of his last works, including the new Customs House being completed years later by his former pupils Edwards and Kelly, who took over his St Werburgh's Street practice after his death.

Much of Harrisons work was on large projects which took many years to complete, so the dates given are listed according to when the work started.

The dates given below are completion dates, so some of the works are dated after James' death at the age of 52 in 1866, and were completed by Edwards and Kelly: 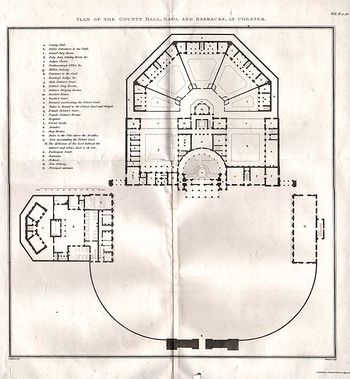 Advertised on EBAY as "Plan by J. Harrison, engraved by W. Warner and published by Cadell & Davies May 1st, 1809". It is certainly a plan of the courts and jail, but "J Harrison" was not born until 1814.