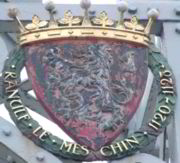 Arms of Ranulf de Meschines on the Suspension Bridge (before restoration). It is difficult to see what this is, but it appears to be a silver lion on red.

Born circa 1074 at Briquessart, Livry, France. An indirect inheritor, Ranulph le Meschin (the Younger), Earl of Chester was also Vicomte de Bayeux. He was also known as Ranulph de Briquessart. He succeeded to the title of Vicomte d'Avranches on 25 November 1120 and was created Earl of Chester in 1121. He was Commander of the Royal forces in Normandy in 1124. He died either on 17 or 27 January 1128 at Chester and is buried at St. Werburg's, Chester. His wife, Lucy survived him, and in 1130 paid 500 marks to King Henry for license to remain unmarried for 5 years.

Ranulf de Meschines has arms which are, on the Queens Park Suspension Bridge, a white lion on a red ground and, in the stained glass of the Town Hall, possibly a red lion on a gold ground. To add further confusion some versions of the arms of his son Ranulph De Gernon (shown in the church window on his page) and that shown on the bridge also differ - the window shows a metallic lion on a red field, while the bridge shows the opposite. Could it be that one or the other has got the arms of the father and son mixed up? The arms on the lodge in Grosvenor Park don't help much as they also show that the father and son had oppositely coloured arms, but in this case they have become blue and gold! 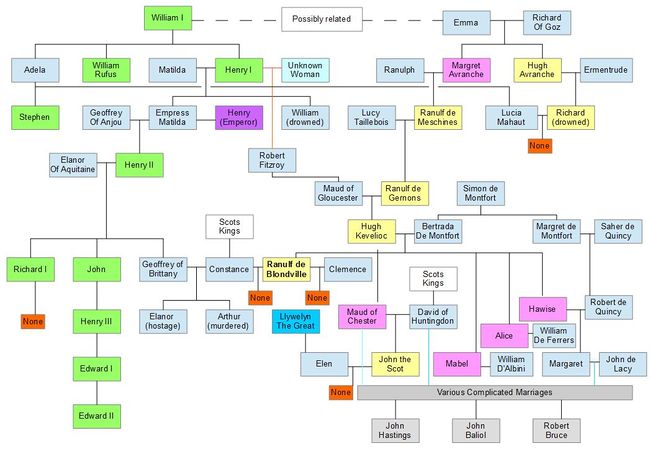 Ranulph was not in the direct line of succession to the Earldom. The Kings of England are in green and the Earls of Chester in yellow.

Ranulf only became earl at the rather advanced age of 51 (in 1120). Prior to this Ranulf served the English king as a kind of semi-independent governor in Cumberland and Westmorland, though he lacked the formal status of being called such. A contemporary illustration of this authority is one charter in the records of Wetheral Priory, which recorded Ranulf addressing his own sheriff, "Richer" (probably Richard de Boivill). A source from 1212 attests that the jurors of Cumberland remembered Ranulf as quondam dominus Cumberland ("sometime Lord of Cumberland").

Ranulf's earliest appearance in surviving historical records was 24 April 1089, the date of a charter of Robert Curthose, Duke of Normandy, to Bayeux Cathedral. Ranulf, as "Ranulf son of Ranulf the viscount", was one of the charter's witnesses. He appears again c. 1093/4, as a witness to the foundation charter of Chester Abbey, granted by his uncle Hugh of Avranches.

Between 1098 and 1101, probably in 1098, Ranulf became a major English landowner in his own right when he became the third husband of Lucy, heiress of the honour of Bolingbroke in Lincolnshire. This brought him the lordship of Appleby in Cumberland, previously held by Lucy's second husband. He promptly constructed Appleby Castle. Originally this would have been an earth ringwork and bailey fortress. The square stone keep of Appleby is one of the best preserved examples of its type and was added in 1170 (by Hugh de Morville). It is known as "Caesar's Tower" - this is similar to the Agricola Tower at Chester Castle neither of which had anything to do with the Romans. Ranulf ceded Appleby to the crown when he became earl of Chester.

Ranulfs family (his brother William) also constructed Egremont Castle. He had an older brother (Richard) who died in youth.

In 1106 that Ranulf founded Wetheral Priory, a Benedictine monastic house.

In 1121, following the loss of the White Ship, the earldom passed through the First Earl Hugh's sister Maud to the drowned Richard of Avranches's first cousin Ranulf. Merely four days before the disaster, Ranulf and cousin Richard had witnessed a charter together at Cerisy. Ranulf was not simply given the earldom, but had to surrender the bulk of the lands of his wife, Lucy and his own lands at Carlisle.

Chester's annual fair was reorganized by Ranulf, who provided new regulations governing its hours of opening. St Giles Hospital was founded in the time of Ranulf, for lepers - it had a burial ground St Giles Cemetery, in which the heads of Welshmen killed in battle with Hugh de Kevelioc were reputed to have been buried in 1170.

De Meschines was keen on hunting. He created Alan Sylvester chief forester of the forest of Wirral and granted to him the manors of Hooton, Storeton and Puddington to hold, upon condition that he performed the duties of forester and in addition that he blew or caused to be blown a horn at the Gloverstone in Chester on the morning of every fair day.

The "Wirral Horn" has apparently survived to the present day, and carries the following inscription, believed to have been added in the 17th Century:

While the inscription on the horn blames the "disafforestation" of the Stanley's on the inhabitants of Wirral, the complaints, were actually by the residents of the Wirral about the wildness of the area and oppression by the Stanleys. A charter confirming the disafforestation of Wirral was issued by King Edward III on July 20, 1376. While the horn was displayed for a short while at the Wirral Museum it has since been returned to its permanent home at the Stanley ancestral seat in Drayton, Somerset. The forest of Wirral turns up in Arthurian legend - Sir Gawain spent Christmas on Wirral before his confrontation with the Green Knight.

The wilderness of Wirral:
few lived there
Who loved with a good heart
either God or man

How Ranulf married (c.1090) a woman referred to as "Countess Lucy", (c.1079-1138), possibly the granddaughter maternally of William Malet, lord of Graville. Ranulph became the largest landholder in Lindsey through his marriage. Legend has it that Malet of Eye's mother was English, and that he was the uncle of King Harold II of England's wife Ealdgyth (the claim being that he had a sister Aelgifu who married Aelfgar, Earl of Mercia, who was the father of Ealdgyth). Legend also claims that William Malet buried Harold after the battle.

Other sources including a genealogia fundatoris of Coventry Abbey, claim Lucy is the daughter of Earl Aelfgar (therefore sister of Aldgyth, Edwin and Morcar and grand-daughter of Godiva). Actual literary confirmation of the identity of "Lucy" is difficult to come by. However:

A further William Malet (died c. 1121) was the third of his family to hold the honour of Eye and the lordship of Granville. He was either the younger brother, son, or nephew of Robert Malet, in other words, either a son or grandson of the first William Malet. He forfeited his English lands and was banished sometime between his father's death (c. 1106) and 1113. Several other barons lost their lands in 1110, so that year is likely. The precise cause is not known, but probably it is connected with the conflicts between Henry and King Louis VI of France during that period or possibly the revolt of Philip de Braose.

A rather cryptic note in "The history and gazetteer of the county of Derby" by Stephen Glover may shed some light on this, suggesting that Ranulf was on the side of William Clito in the first Norman rebellion of 1118-19. The source is a little problematic given that Ranulf did not become Earl until 1121:

So, due to the marriage of the Saxon earls of Chester and Wessex, Ranulphs marriage to Lucy would ensure that his son was descended from both the Mercian earls and the English kings.

By 1124 the Earl was back in favour: - a serious aristocratic rebellion (the Second Norman Rebellion) broke out in Normandy in favour of William Clito, but the rebels were defeated as a result Henry’s intelligence network and the lack of organisation of the leaders, who were defeated at the battle of Bourgtheroulde in March 1124. Clito was the son of Robert Curthose - William the Conqueror's eldest son and so had a claim to the throne against his father's younger brother Henry. Clito's claim became even stronger in 1120 with the loss of the White Ship and the death of Henry I's only legitimate son - he became the obvious male heir to England and Normandy.

It is believed by some that Earl Ranulph commanded at least a part of the royal forces righting against the rebels. Ranulph had also benefited from the White Ship as his cousin Richard had drowned - leading to Ranulph's succession through his mother Maud, sister of Hugh of Avranches.

It has also been suggested that Ranulph was responsible for the capture of both Amaury de Montfort, (son the original Simon de Montfort count of Evreux) and Waleran de Meulan (Earl of Worcester) - others have them captured by William de Tancarville or Odo Borleng.

A descendant of Simon (I) de Montfort would later (briefly) become Earl of Chester. Waleran was released for unknown reasons in 1129. He resumed an active role at court and he and his twin brother were both present at Henry I's deathbed (Henry famously died (1135) from eating "a surfeit of lampreys"). As for Amaury, Henry I King of England "took the county of Evreux into his own hands" because he "had forfeited the king's favour by his effrontery"

It has been suggested that during the revolt, Louis VI was distracted from active intervention because Henry I got his son-in-law, the Holy Roman Emperor Henry V, to threaten Louis from behind. Bourgetheroulde was a particularly messy battle - afterwards Henry decided to blind three of the more important prisoners. Charles the Good, count of Flanders, objected to the king, believing it was wrong to punish knights in this fashion. Henry replied that two of these prisoners were his own liegemen and that they had betrayed him by going to war against him, therefore deserving a punishment of death or mutilation. As for the third captive, Luke of La Barre, he had mocked Henry with scurrilous songs, and that if blind, he would give up this practice and provide an example for others.

Henry V is supposed to have died at Utrecht on 23 May 1125 although some sources cite him as the mysterious Anchorite who lived in the Hermitage at Chester.

If anyone is into Anglo-Norman conspiracy theory there is a story in here somewhere: - a relative of the English King supposedly buries him (although the body could only be recognised by his wife) - the wife then flees to just where - Chester:

..and there is the story that Harold isn't dead after all but living in the Hermitage in ...Chester.

And then the Malet family fall out of favour and their lands go to the Earl of ... Chester.

And who (back in 1071) had written to console the daughter of William I who had possibly been jilted by Harold and became a nun? - sources show that it was Anselm of Bec - later to found the Benedictine Abbey ... at Chester

There are other possible twists to the tale. Harold (house of Wessex) and the Earls of Chester and Northumbria (Leofric's House) had fair warning of the potential for war in 1066 and would have been well advised to make preparations to hide any gold and other treasures which they might have had. At least one hoard has been associated with Harold's brother.

Loss of lands to the Scots

It was not all plain sailing for the earl. In his first act as king David of Scotland (1124) made a grant or perhaps a reaffirmation of a previous grant to one of his followers, Robert de Brus, of the lordship of Annandale, on the frontier between his old principality and the lands of "Galloway":

Clearly "de Meschin" had lost land in the region.