Chester's spooky Victorian cemetery at the south end of the Grosvenor Bridge originally had a lake with islands and two chapels; one for nonconformists and another (on higher ground!) for Anglicans. Like many Victorian cemeteries it started off as a private concern. The original Overleigh Cemetery was opened by the Chester General Cemetery Company on 12 November 1850. In fact, the money ran out part-way through landscaping and fresh shareholders had to be found in something of a hurry.

The site was laid out between 1848 and 1850 in Overleigh Road in the south-west Handbridge area of the city, close to the River Dee and the Grosvenor Bridge. Its architect was Thomas Mainwaring Penson (1818-64). The chapels and entrance gate are now listed by English Heritage. Besides two chapels, two lodges and a chaplain's house, the original Victorian cemetery contained an ornamental lake with three small islands (none of these survive).

It is situated in a dark valley and, as the evening draws near, it can be a very spooky place. The gates are locked at dusk. There is an extension to the south. 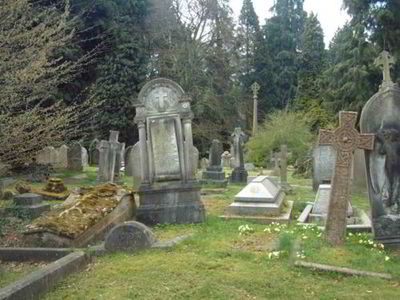 With its tilted gravestones, Overleigh is a very spooky cemetery.

The locations of some of these are shown on the map to the right. Please remember that some of the graves are quite recent and relatives may be visiting, so don't trample over everything else looking for the interesting stuff.