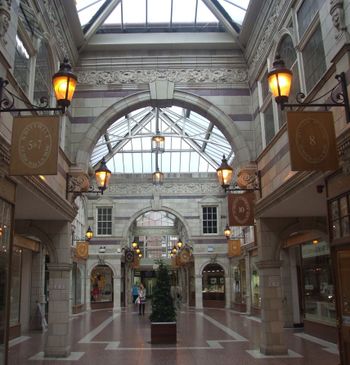 St Michael's Row off Upper Bridge Street (in 2014), was constructed 1909 by the younger Lockwoods.

Thomas Meakin Lockwood (21st November 1829 – 15 July 1900) was born in Whitechapel, London, and brought up in East Anglia, probably in St Helen, Ipswich. From 1851 he was articled to Philip Causton Lockwood, his uncle and the Borough Surveyor of Brighton and based at Arundel in Sussex. He then worked in various offices 1855-62 including Thomas Mainwaring Penson (1817 or 18 - 1864) and George Woodhouse (ca 1829 - 1883). In 1862 he established an independent practice in Chester, based at 80 Foregate Street which was later joined by his sons, William Thomas and Philip H. In 1864 he was living in Hoole.

His early designs included a Presbyterian Church at Castle Street, Holt, and his first works in Chester itself included what is now the "Chester Music Theatre" in Cecil Street. He also designed the Town and Market Hall at Whitchurch. 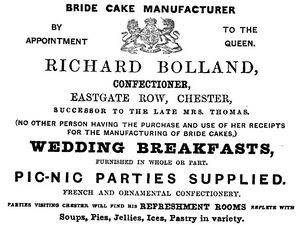 Bolland as advertised in Hughes.

Lockwood married twice, first to Harriet Scrivener in March 1852. They had eleven children. Harriet died in 1877, aged about 45. Lockwood's second wife was Isabella Bolland, who he married at St Johns on 22nd September 1888. He had no children in his second marriage. Isabella's occupation is given as "confectioner" so she was probably of the same Bolland family who had the cake shop in Eastgate Street (CR 38/76 19 Jan. 1881 - a conveyance, seems to confirm this).

Thomas Meakin Lockwood died on 15th July 1900. He is buried in Overleigh Cemetery - there is a photo of his grave (inscribed with quote from Tennyson's "In Memoriam") on Virtual Stroll. A glass memorial window to him (by Shrigley and Hunt, 1901) is in the north aisle of St Johns. Appropriately, the window depicts the architect Hiram Abiff and is full of masonic symbolism - such as the pillars labelled "Boaz" and "Jachim" and the tiled floor.

Lockwood's window has one of the weirdest co-incidences in Chester associated with it. Looking on "Google Earth" where Hiram in the Lockwood memorial window is apparently pointing on his map reveals a spooky shadow with no-one to cast it - who says "you don't follow maps to treasure .. and X (from a stained glass window) never ever marks the spot" - even when it is between two pillars marked "B"(3) and "J"(7).]] 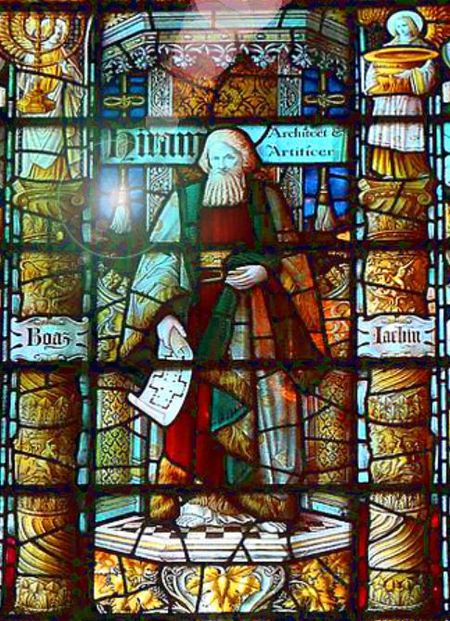 The elder Lockwood's memorial window (1900) at St Johns. The symbolism is "masonic" - pillars labled "Boaz" and "Jachim" and a tiled "square" on the floor. The figure is Hiram Abiff - the "Widow's Son" of Masonic Myth - the central character of an allegory presented to all candidates during the third degree in Freemasonry. Hiram is presented as the chief architect of King Solomon's Temple, who is murdered in the Temple he designed by three ruffians during an unsuccessful attempt to force him to divulge the Master Masons' secret passwords. The themes of the allegory are the importance of fidelity, and the certainty of death. According to Josephus in Antiquities of the Jews, Boaz (Hebrew בֹּעַז bōʿaz "In him/it [is] strength") stood on the left when entering Solomon's Temple, while Jachin (Tiberian Hebrew יָכִין yāḵîn "He/it will establish") stood on the right. Looking at the place where he appears to be pointing reveals a coincidence that seems straight out of Indiana Jones.

Lockwood began his rugby career playing in England, and represented both Richmond and Birkenhead Park, the later of which he captained. On moving to Wales, Lockwood joined first class Welsh team, Newport. While playing for Newport, Lockwood was selected to represent the Welsh team, playing three games for the country, all during the 1887 Home Nations Championship. His first game, played alongside fellow Newport team mates Tom Clapp, Charlie Newman and brothers Bob and Arthur Gould, saw Wales draw against England. Lockwood was reselected for the match against Scotland, which saw Wales thoroughly beaten; Scotland running in 14 tries without reply. In his final international match Wales beat Ireland at Birkenhead Park. On 18th September 1886 The Penny Illustrated Paper & Illustrated Times published the following unhappy tale about Lockwood:-

William was Clerk of Works for Newport (Monmouthshire) where, c.1883, he designed (jointly with E, A. Lansdowne) the Newport Town Hall. He also worked with Thomas Edward Collcutt - the designer of many famous London buildings. William traveled in Holland and Belgium to study architecture.

Works listed below are for Thomas Meakin Lockwood, unless noted otherwise.

Looking down Upper Bridge Street in 2015 with the High Cross in the foreground and Eastgate Street to the left. This wss the site of the headquarters of the garrison of Roman Chester. The building left of center (1 Bridge Street) is by Thomas Meakin Lockwood (1888), while that to right of center is another Lockwood building. The High Cross was broken up at the end of the siege of Chester in the Civil War and some surviving parts only restored to its ancient original site at the intersection of the city's main streets in 1975, after an absence of some 329 years.

The east side of Upper Bridge Street in 2015 - showing St Michael's Row.