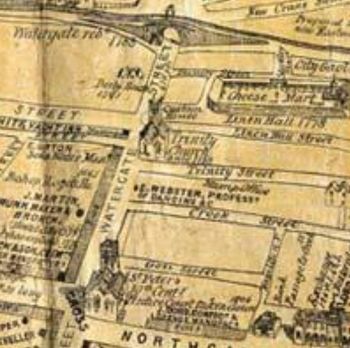 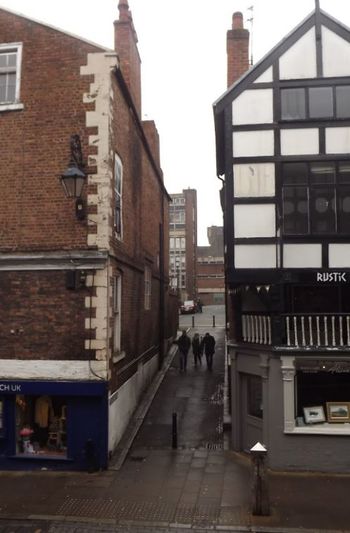 Crook Street entryway. The upper side window of the house to the left is bricked-up with a false window painted on.

Crook Street was once Gerrards Lane, which ran from Watergate Street to Parson's Lane (now Princess Street). It now ends at Hamilton Place (which confusingly was once called Crook Street). Crook Street is possibly Old Norse: from the man’s name Krókr, meaning "hook" - as in crochet - or bent/crooked - and said to be originally bestowed on a "devious schemer".

In 1914 most working-class Cestrians lived in 19th century terraced housing with tiny back sculleries, outside lavatories, small back yards, and front doors opening on to the street. In the city centre, conditions in the courts of Princess Street, Goss Street, and Crook Street remained below that standard into the 1930s. In Princess Street (which the Town Hall stood on the corner of) there were 224 houses, of which 140 were damp and 120 verminous; 103 shared lavatories, 118 had no suitable washing accommodation, and 108 lacked a sink or internal water supply. The newspapers from are around 1900 frequently report cases of small-pox, typhoid and other diseases in the area, especially in the courts off Crook Street. These slums were cleared in 1939.

The south end is a very narrow stretch closed at both ends of that section by bollards. The house on the corner with Watergate Street has a "false" window painted over a bricked up window on an upper floor, just above the enclosed row. To avoid the window tax some houses from the period can be seen to have bricked-up window-spaces (ready to be glazed or reglazed at a later date). In England and Wales it was introduced in 1696 and was repealed in 1851. City Records (AF/49f/6) show that the Row was enclosed in 1713 on the application of Robert Bavand, a "Doctor of Physick", on payment of a fine of £2 10s.

Archaeological investigations at 1-11 Crook Street in 1973 recorded the southern end of the barrack block. On this occasion, more detailed recording was carried out and two contubernia and traces of the verandah on the east side was identified. Although this site has not been published in full, detailed notes survive in draft form. The evidence from Crook Street was sufficient to indicate at least five phases of activity beginning in the mid to late first century AD with evidence of early site clearance and ground levelling deposits. A series of post and stake holes were also encountered, however, it is uncertain whether they represent archaeological or natural features. Also in this phase, a series of deliberately cut post and stake holes were then cut into the levelling deposits forming at least one linear feature. It was suggested by the excavator that this represented boundary demarcation for later structures.

The second phase consists of a series of post holes and beam slots representing the construction of a timber framed building, believed to be a barrack block. The excavations encountered the two southern most contubernia (pair of rooms) as well as evidence of a verandah on the east face supported by wooden posts. Dating evidence was not discussed in detail, however, the excavator indicated that this phase dated to the late first to early second century AD. The third phase of activity consists of the reconstruction of the barrack block in around 120 AD using stone foundations, evidence of wall foundations along with internal doorways as a well constructed fireplace was recorded as well as stone columns for the verandah. The new building followed largely the same layout as the timber framed structure, however, it was constructed some 4m to the north.

Sometime after the initial construction of the barrack, evidence of a change in activity was recorded consisting of a series of shallow pits cut into the previously tidy structure and subsequently sealed by a thick layer described as ‘dark earth’ comprising organic and rubbish deposits. In the barrack building this layer was approximately 0.25-0.30m thick while on the verandah it was 0.15m thick and served to partially bury the fireplace added in the stone reconstruction. Although tentatively linked to the military ‘hiatus’ of the mid second century recorded on several occasions in the city, there was no clear dating evidence confirming a second century date. Rather the evidence appeared to post date the earlier stone reconstruction and predate the later redevelopment of the site.

The fourth phase of activity consists of the rebuilding of the barrack block. Although dating was again not discussed in detail, it appears to have occurred in the late second to early third century AD. The walls of the barrack block were taken down to the lower courses and rebuilt using different construction techniques while new floor surfaces were added to both the internal and external spaces. The verandah was also enclosed in this phase. The remainder of the Roman period consisted of evidence of two further phases of activity largely comprising repair and maintenance to the existing structure. 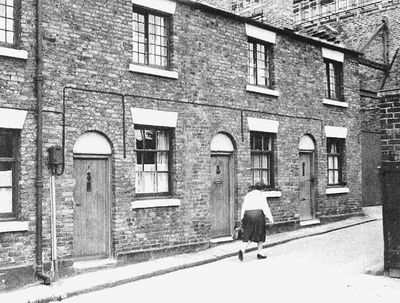 Green and Wardell's Almshouses in Crook Street, in 1965, before later demolition.

Thomas Green by deed of 1602 gave property partly to benefit 20 poor householders, being freemen or their widows, who were each to receive 6s. 8d. a year. The income came from a house in Eastgate Street, which was let to an alderman on a 99-year lease in 1759 at only £11 a year, albeit in a ruinous condition. By 1836 its real rental value was almost £150. When the lease fell in, the Municipal Charities Trustees spent £1,200 given by their chairman, William Wardell, in building a hotel on the site; he also built six almshouses on the west side of Crook Street in 1859. The charity was renamed Green and Wardell's charity, and the increased income, £145 in 1862, provided 6s. a week each for the almsmen. After 1892 the surplus was carried to the general municipal charities account. The Crook Street almshouses were demolished in 1973 during the redevelopment of the city centre.

William Cross, "Galvanic therapist" of Crook Street Chester, made his own coffin from matchboxes (it took him ten years) and fitted a light and various galvanic plates made of zinc to it. Perhaps he believed that this would restore him to life. During the two days the coffin was at the undertakers, Messrs Dutton and Sons in Frodsham Street, the shop was visited by hundreds of curious people. He is (still) buried in Overleigh Cemetery. The "galvanic" effect was named after the scientist Luigi Galvani who investigated the effect of electricity on dissected animals in the 1780s and 1790s. In 1786 he discovered that when a frog's legs are touched by both a copper probe and a piece of iron at the same time then they twitch just as if an electric current were present. He originally attributed this to a vital fluid (an old theory of biology that is no longer accepted by science). He later changed his mind and theorized that the action was caused by "animal electricity" in other words, electricity generated biologically. Both theories were wrong. Emma Hamilton, originally from Ness, near Chester worked in her youth as a model and dancer at the "Goddess of Health" (also known as the "Temple of Health") for James Graham, a Scottish "quack" doctor in London. The establishment's greatest attraction was a bed through which electricity was passed, giving paying patrons mild shocks. This supposedly aided conception, and many infertile couples paid high prices to try it.