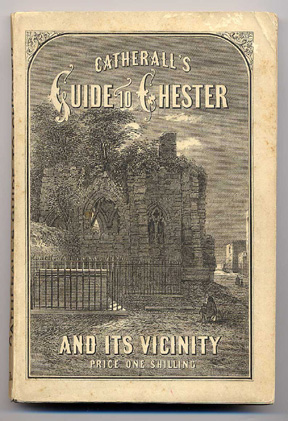 HUGHES, THOMAS & George S. Measom. The stranger's handbook to Chester and its environs; containing a short sketch of its history and antiquities, a descriptive walk round the walls, and a visit to the cathedral, castle, and Eaton Hall ... with thirty-four new illustrations, by George Measom. Chester: Catherall & Prichard; London, Smith and Son, 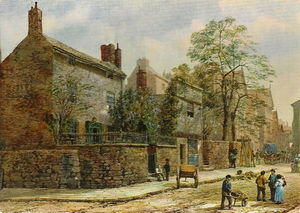 Thomas Hughes FSA (1826-1890). Born in Chester, he attended The King's School, which was then housed in the old monk's refectory in the Cathedral. Later in life, he became a governor of the school and founder of its old boys' association. He was a fellow of the Society of Antiquaries, served as Sheriff of Chester (1873-74) and also as warden of St Johns Church.

His home was The Mount, which formerly stood in St Werburgh Street opposite the Cathedral. Just before it was demolished, he commissioned a picture of it from local landscape artist Louise Raynor. In 1856, Hughes wrote of the facilities at Overleigh Cemetery that, "nature and art make them worthy of the dead and pleasant for the living". He was later (1890) laid to rest there himself, although he also has a memorial at St Johns.

Not to be confused with...

Social reformer and children's writer - one of his better known works was Tom Brown's Schooldays (published in 1857). In addition to his interest in socialism and reform, Hughes was an advocate of co-operation and was actively involved in the early movement, for example, he was President of the Co-operative Congress, London of 1869. He was also on the Board for several societies, including the Congress Board, the Central Co-operative Board (precursor to the Co-operative Union, now called Co-operatives UK) and was involved in establishing a Dress Making Co-operative. He was the Member of Parliament for Lambeth from 1865 to 1868 and then Frome from 1868 to 1874, where he represented the working class interest. In 1878–9 Hughes began writing The Manual for Co-operators (1881), with Vansittart Neale, for the Co-operative Congress. 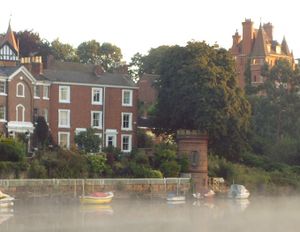 Uffington House (right), built for Thosmas Hughes is one of the many fine buildings along the River Dee. The summerhouse "tower" by the riverbank is also listed.

He sought an appointment, which he was given in July 1882, as a county court judge. This brought an end to his involvement in politics, and a move to Chester. He resigned from the Co-operative Union. His work as a judge seems to have been congenial to him although, according to John Telford, "his rough and ready justice became a byword for constant reversal on appeal" (Telford, 10). During the 1880s he wrote four more biographies, including Daniel Macmillan (1882) and David Livingstone (1889).

Edward Augustus Lyle Ould built him a house called Uffington, at Dee Hills Park, Chester, to which he moved in October 1885.

At the end of the 1880s Hughes clashed with John Thomas Whitehead Mitchell of the Co-operative Wholesale Society, over the vertical integration Mitchell favoured for the Society. Hughes died in 1896 aged 73, at Brighton, of heart failure, and was buried there. 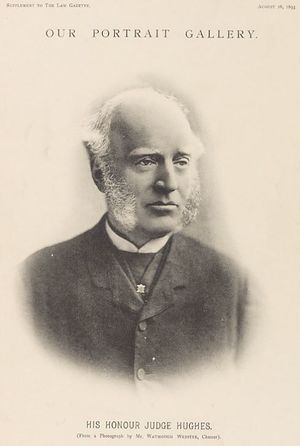 His daughter, Lilian Hughes, perished in the sinking of the RMS Titanic in 1912. She was married in Chester in 1890 to Ernest Courtenay Carter (b. 1858), a clergyman originally from Berkshire. The newly married couple appeared on the 1891 census living at the Vicarage in Chieveley, Berkshire before they settled in London, appearing on the 1901 and 1911 censuses at St Jude's Vicarage, 26 Commercial Street, Whitechapel. The couple had no children. Lillian and her husband boarded the Titanic at Southampton as second class passengers (ticket number 244252 which had cost £26). On the night of the sinking it is believed that the Carters made their way up to the boat deck during the evacuation and were, according some accounts, offered a space in a lifeboat together. However, they chose to remain behind and it has been suggested that this was because Mrs Carter refused to leave her husband.

Who painted a few of the portraits of several mayors of Chester which hang in the Town Hall. These include both Charles and William Brown (of "Browns" department store). Thomas Leonard Hughes was born Greenfield, Holywell in 1862, son of yet another Thomas Hughes. He was an established portrait painter (more generally known as Leonard Hughes) in north Wales and a member of the Royal Cambrian Academy of Art. He painted a portrait of Richard II (commissioned by Richard Grosvenor and John Roberts, MP, in 1886) which is in Flint Town Hall and is often reproduced as a medieval work by mistake. Richard was captured at Flint and briefly imprisoned at Chester Castle. Richard's Royal Treasure is often said to be hidden down the well at Beeston Castle. There is some evidence to suggest (see Clockmaker) that this Hughes was the correspondent who suggested that the Eastgate clock be coated with sand so that it did not stand out:

Editor of the Chester Chronicle, then one of the Newspapers in Chester. He was the Author of "Chronicle of Chester" which wrongly claimed that John Fletcher (who became the editor of the Chronicle in 1783) told Thomas Telford how to build the Pontcysyllte Aqueduct.

Hughes' often humourous style contrasts sharply with the somewhat snobbish Hemingway. He is obviously fond of his food an drink and makes frequent and enthusiastic references to various "Watering Holes" in his guidebook. One example being at the end of his "Heigh-Ho Off We Go" circumperambulation of the City Walls:

Hughes appears to completely ignore social issues and unlike Hemingway hardly ever sneers at (or mentions) the "lower orders".