A panoramic view of the "Earl's Eye" at sunset from "Gallows Hill" at Boughton where the River Dee turns into the first curve of the great S-bend at the "Chester Gorge". To the left, where an occasional ferry servive is provided are the Boughton Fords; here the river is wide and very shallow. During the Roman occupation of Chester there was a properly constructed ford for the passage of man and beast. Several Roman rings have been found here, which are preserved in the Grosvenor Museum. The boat-races of the Chester Regatta are held on the stretch of the River Dee on the left.

Approaching the outskirts of Chester the valley of the River Dee narrows somewhat and will reach its narrowest between the two major bends at Chester. This poses something of a problem - just why does the river Dee flow through Chester and not flow further west through Rosset and Broughton? Looking at the steepness of the banks of the river between a little way upriver of the Suspension Bridge and the Grosvenor Bridge it is clear that the river has almost had to cut a gorge out of the sandstone between the Earls Eye and the Roodee. If this gorge were blocked by a dam where the Grosvenor Bridge is (and just as tall), then the Dee would back-up to flood the Earls Eye, narrow at Heronbridge then form a broad lake back to Holt and a second lake back to Worthenbury and Bangor on Dee. However the waters would not eventually pour over the dam, as they would find a route to the estuary and hence to the sea through Lavister and Lower Kinnerton along the English/Welsh border before they climbed high enough. One possible solution is that the "gorge" between Chester and Handbridge is another glacial spillway, similar to the "Backford Gap" behind Chester Zoo. It is even possible, though unlikely, that this spillway is a continuation of the Backford spillway and that the "River Dee" at Chester, which would have been the Mersey, actually once flowed in the opposite direction until it managed to cut through previous high ground between Blacon Point and Chester Golf Club at Wilcoxons Point. 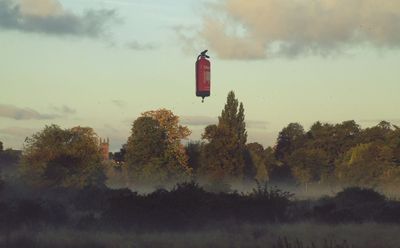 Approaching Chester through misty meadows with the sun just coming up, one never knows quite what to expect - the floating fire-extinguisher is actually a hot air balloon and came as something of a surprise!

The theory that the River Dee flowed through Lavister to the Dee estuary as late as Roman Times and was diverted by the hand of man was suggested several times during the Victorian period: see for example Williams, J., (1857). On the course of the River Dee. Journal of the Chester Archaeological Society 1. Vol 1, pp. 28-31. However there is no evidence of any human tampering with the course of the Dee in the relevant section of river.

Another mystery concerning this loop of river relates to the extramural settlement of Roman Chester at Heronbridge. The Romans apparently used to ship tiles here from Holt/Farndon, but off-loaded the tiles at Heronbridge and brought them overland to Chester. It has been suggested that, prior to the construction of the Norman weir, the River Dee was not actually navigable between Heronbridge and Chester itself and so the land route was needed. This is a subject still open to debate. 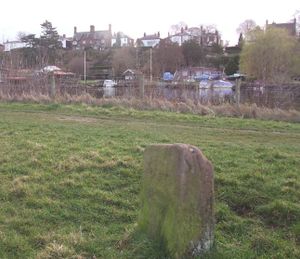 More mysteries linger like the fog: just where "Bottoms Lane" joins the riverside path is a stone fairly professionally inscribed with the very faded words "Capt J Wardle 1710". Whether this is a gravestone or some other type of memorial is unknown. The 1872 OS map shows a Boundary Marker on or near the site of this "Wardle" stone and it could be that someone just carved their name on a stone which was already there.

The simplest way to find the meadows is to cross the Suspension Bridge over the River Dee and then follow the south bank of the river eastwards (to the left on crossing the bridge). This riverside path soon leads to a gate at the entry to the meadows. Another access to the meadows can be found at Bottoms Lane. Near the gate is a disturbed area which is thought to be the remains of a Civil War redoubt opposite the foor of Dee Lane. This redoubt protected one end of a bridge of boats which crossed the river at this point and linked up the Parliamentary besiegers to the south and the east of the city.

The Earl's Eye is a popular spot for "drone" fliers and, fortunately, lies (just) outside of the three-mile exclsion zone around Harwarden Airport to the west of the city.

As a patchwork of brush, hedge with scattered trees and wetland the meadows host an extensive suite of wild birds. These include goldfinch, willow warblers, whitethroats, linnets, wintering chiffchaffs and blackcaps. There are also sparrowhawks, kestrel and buzzards to be seen. The sharp-eyed can easily expect to see over twenty different bird species on a good day. Frogs and smooth newts can also be spotted. The summer-grazing cattle have been released onto the meadows for centuries. Other birds spotted include the relatively rare bullfinch, kingfishers, stone-chat and tree-creepers. 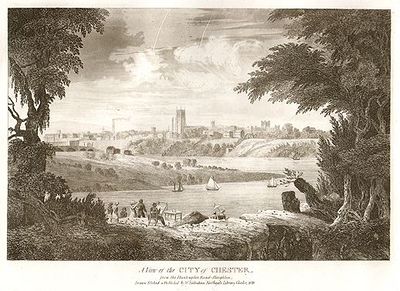 The view of Chester from Boughton, showing a part of the Earl's Eye was a popular subject with artists - some of whom can even be seen in this print. The Earl's Eye is often shown as far less flat than it actually is. The church tower in the centre of the image is that of St Johns, which collapsed in 1881.

The large tract of meadow known as the Earl's Eye (or at times "Newbold's Eye"), lying in a bend of the River Dee east of the city, opposite Boughton and extending as far south as the now vanished village of Claverton, seems to have been part of the demesne of Chester Castle in the 12th and 13th centuries. Field names suggest that parts of the land have always been partly waterlogged, with names like "Bog Field" and "Bottom Meadow", although archaeology has shown that other parts were dry enough for the planting of crops. If anything, the meadows are probably drier now than they were in the past as the Dee is extensively regulated and a significant quantiry of water is extracted before the river reaches Chester. As a consequence many of the drainage ditches shown on early maps have silted up.

After the Norman conquest the meadows were administered by the Norman Earls of Chester, although they were the property of the crown and reclaimed by the Crown when the last Norman Earl died and the lands were purchased from the heirs.

Hanshall, citing Lysons, records that land and pasture (about half of the meadows) were granted, around 1285 under the instructions of King Edward I, to Randle of Merton as part of an exchange. Hanshall, writing in 1816, gives the following information:

The holding remained in the hands of the Mertons and their heirs, the Gleggs of Gayton, until the 19th century. Its western end was developed as the exclusive suburb of Queen's Park from the 1850s, although initial development was slow. Some of the impetus for the Queen's Park dvelopment came from the Fielden brothers of Todmorden, a noted Quaker family who had made good profits from cotton spinning. According to William Cobbett in 1832 they were involved in spinning weaving and printing and employing over 2500 persons. Cobbett also stressed that the brothers were:

Another holding in the meadows was acquired in 1568 by Gilbert Gerrard, probably from Sir Thomas Venables, and granted to William Gerrard, then recorder of Chester, in 1569. William Gerard (1518–1581) was an Elizabethan statesman, who had a distinguished record of government service in England, Wales and Ireland. He sat in the House of Commons as MP for Chester for many years, and was Vice-President of the Council of Wales and the Marches. He was Lord Chancellor of Ireland for five years. Historians have praised his energetic efforts to reform the Irish legal system, although they differ as to his effectiveness in this task. Despite the fact that he was not a clergyman, he was appointed Dean of St Patrick's Cathedral, Dublin in 1573, although he admitted to having an "uneasy conscience" about his right to enjoy the office. Starting in 1555 Gerard sat in six consecutive parliaments as a member for Chester — the last two of Queen Mary's reign, her 4th (1555) and 5th (1558) and the first four of Queen Elizabeth's reign, 1st (1559), 2nd (1563), 3rd (1571) and 4th (1572). 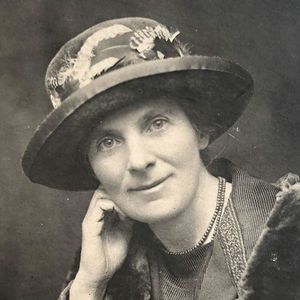 In 1588 the latter's heir, another Gilbert Gerrard, (another Chester MP), sold around 30 acres of closes and pasture within the Earl's Eye to George Beverley of Chester for £400. As customer of Chester, Gerard collected the duties upon French and Rhenish wines. In 1594 he complained to Lord Burghley about a 10s. duty charged on every tun of wine towards the furnishing of wines for the Queen’s household, and 5s. for wastage. His will, if he made one, has not been found and his date of death is unknown. The land sold to Beverley eventually ended up in the ownership of various parties including William Thomson, George Harrison and Mary Hignett by about 1848.

In 1929 the 64.5 acres of the meadows were purchased by Harry Faulkner Brown (mayor of Chester in 1919 and owner of "Browns of Chester": see: Brown) and his wife Louisa Phyllis Brown (the first female mayor of Chester in 1938) who presented the title deeds to the City, for use as a public park. A little more land was added later.

Phyllis Brown was returned to the Council three times before being ousted in 1929 but in 1932 was re-electedin a by-election for St Mary’s Ward.In 1933 she was elected as the first female Alderman in Chester.She remained the sole woman in the Liberal ranks in the 1930’s. As a former chairman of the Public Library Committee, the City Library was one of Phyllis Brown’s chief interests. She and her husband provided the property whereby extensions to the Library were carried out and Mrs. Brown also provided the fittings for the children’s library. Phyllis Brown (born Louisa Phyllis Humfrey) was President of the Chester Branch of the Women’s Freedom League. The WFL in Chester opened a Suffrage shop at St. Werburgh Street where they sold merchandise such as badges and also set up a war savings scheme. Social events were organised for service personnel which were used as an opportunity to publicize women's suffrage. In March 1938, when she was Mayor of Chester, Phyllis Brown presented many trees planted along the river banks and was presented with a silver spade by the Improvement Committee. Later that year she was instrumental in buying two further plots of land on The Meadows and also gifting them to the City. This included the Barnfield on which the Boathouse was built in 1971, used by the Queen’s Park High School Rowing Club.

Phyllis Brown paid the fine for a "suffragist" who could not pay up and was to be sent to prison. Poor women were "suffragists", middle class women were "suffragettes". The Suffragist was Mary Phillips who flour-bombed Herbert Asquith outside the Town Hall in 1912 when on his way to ireland to visit Lord Lever (whose house at Rivington the Suffragettes burned down). According to some versions of the story Mary Phillips was then thrown out of the movement because her fine had been paid and she hadn't done her time, but this appears not to be true.

By 1980 the Meadows had become so neglected that local resident Adele Edwards formed the Meadow Users Association. Initially this was an informal arrangement with the objective of encouraging interest in the Meadows. In 1984 this Association was formalised into Friends of the Meadows with the aim of involving local people in the management of the Meadows.