Thousands pass it every day.. 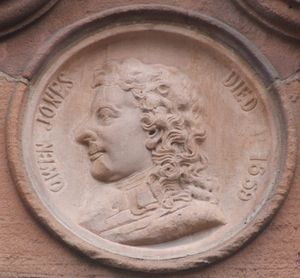 ..Owen's cameo on the front of the Bank in Eastgate Street.

On the front of the "North and South Wales Bank Building" in Eastgate Street, just by the door, is a rather odd bit of carving with the words: "Rebuilt by the charity trustees 1884". A few feet further up the wall is a round cameo in stone which refers to "Owen Jones Died 1658". Thousands pass this every day without a second glance, but the history behind these two memorials is of some interest.

We know that Number 47 was originally a Gentlemens Club and bank, constructed 1883-4 and designed by Douglas and Fordham, it was enlarged in 1908. The bank was a Welsh bank (The North & South Wales Bank, established in 1836), largely funded by the "Liverpool Welsh", hence the first storey frieze bears shields with the arms of twelve of the thirteen former shires of Wales (excluding Monmouthshire). Historically, Owen Jones of Chester (a butcher by profession) had granted by his Will (dated 1658) what he believed to be a moderate sum of money to the Corporation for the relief of the poor of the guilds of Chester in rotation. This money was obtained from a mortgage on what Owen believed to be eighty acres of poor farmland near Minera. As stated in his will, he:

He also bequeathed £5 yearly to the Mayor and Sheriffs of Chester, who were the Trustees, to purchase rings for them as a memorial of their year of office. 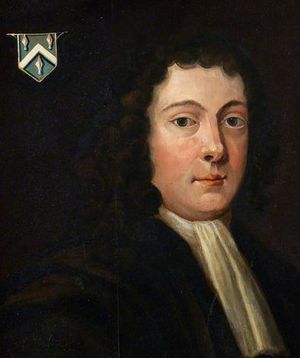 Owen Jones as depicted in his portrait from Chester Town Hall (its in the Mayoress' Parlour).

The Baby and The Bell-rope

Owen Jones charitable act at the end of his life starts with a mystery at the beginning. In the late 16th century, a baby was found warmly wrapped in a blanket and tied to the bell rope in the centre of the tower of Northop church - presumably the Curfew Bell. The Vicar and Church Wardens, who were responsible for foundlings, paid from parish funds to have the baby adopted by a poor but respectable couple named Jones. In his early days he was given the nickname of "Owen Rhaff" (Welsh for rope). Nothing much else is known about the early life and education of the child, baptised as Owen Jones, but he was apprenticed to a butcher in Chester. Owen worked hard and prospered in a community of butchers in Watergate Street, and was a regular worshiper at several churches in the city. He did not have a shop, or is listed as a member of the Butcher's Guild and so was probably a wholesaler or supplier of meat.

In 1627 he was appointed a parochial officer of St Peter's Church at The High Cross. One of his virtues seems to have been thrift, for in course of time he became the owner of several small estates and mortgages on property in Flintshire, Denbighshire and Cheshire. Another of his virtues was his kindly feeling towards his fellow men and sympathy for the poor and needy. In the office of the Chester City Guilds there is a large engraving of him with a heraldic badge consisting of a shield with:

A small framed copy of this is in the vestry of Northop Church. How he came to possess this particular badge is unknown. A portrait of him in oils with the same heraldic badge is in the Mayoress's parlour at the Town Hall. The latter is supposed to have been brought there in 1869 after being in the Pentice Chamber of The Exchange, where it survived the fire which destroyed the building in 1862. The same badge turns up on the carving in Eastgate Street.

The initial income of Owen's bequest was £27 a year of which £20 was distributed. His gravestone at Northop (one of the earliest, laid flat on the south side of churchyard) states that he also left "Thirty Six Pounds per annum for ever" to the "Church and Poor of Northop Parish". However, a lead mine was discovered on the property around 1744 and the mortgage became a far more valuable instrument. Lead prospecting was promoted by Alderman Richardson of Chester. Between 1761 and 1781 the city companies had received nearly £13,000 in royalties. Difficulties in draining the mines hindered their exploitation after the 1780s and they were finally abandoned in 1824. Surplus funds had been invested, for example by 1802 the sum of £10,640 was accumulated and this sum was lent to the Corporation (at 4%) upon the security of their property in Chester. The Assembly archives contain some early documents relating to the charity (ZCL/122/(c) 1653-1781), which show relatively large sums changing hands in all sorts of transactions where the Corporation is acting as "Trustees of Owen Jones". 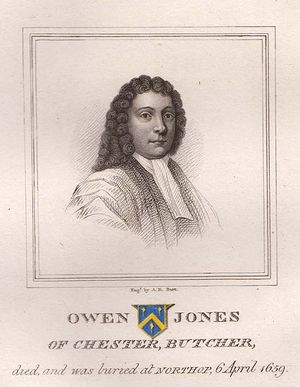 An engraving of Owen Jones.

The Corporation's management of the charities in the 18th century was at best lax and in many respects clearly corrupt. In many cases, no separate accounts were kept for the municipal charities, but all income was merged into general funds, from which it was diverted to non-charitable purposes. St John's Hospital, by far the richest charity before Owen Jones charity had its leaden "windfall", was the most severely plundered. In addition the Corporation sold what were supposed to be permanent rent-charges in order to pay its debts, let charity property to aldermen and councilmen on long leases at low rents. From the 1740s the Corporation connived with the Guilds' misapplication of the Owen Jones charity, who by the 1780s were dividing the proceeds indiscriminately among their members, whether poor or rich, as each guild came round in rotation. Admission to the guilds was closely regulated (see: Charters), some choosing to admit new members at inflated premiums, others to exclude new guildsmen as their own turn for the "bonanza" approached. While the Corporation was strongly in favour of the intended canal to Nantwich and beyond, it was a heavy investor through the Owen Jones charity in the company's shares, thus risking (and eventually losing) £2000 of the funds of the charity (about 2 million in 2016 money) rather than its own.

Frank Simpson wrote of the charity:

In 1792 when the Owen Jones payout came to the Bricklayers £203 11s was paid out to the 12 members of that company of which half were Bodens.

In 1798 the distribution of the funds from the Charity to the "Poor Bretheren" was £19.50 per head. In terms of comparing wages, this is the same as at least £20,000 in 2016 money, and the "Poor Bretheren" included the then Mayor of Chester (Thomas Barnes Esq), his son (Thomas jnr), and possibly at least one other family member (both Samuel and Benjamin Barnes are amongst the 19 member who benefited). The only beneficiary who did not get £19.50 was "Widow Dawson", who got £1 1s. In addition there were £5 spent on refreshments, £14 in other disbursements

From around 1800 onwards attempts were made to investigate these abuses, but these got nowhere (ZCL/122/(a) - 1808. Contains correspondence with the Attorney General, at the relation of Samuel Turner and Samuel Haswell, Informants, v. Robert Hodgson, Esq., Henry Bowers, Thomas Bradford and others, Defendants, before the Master of the Rolls, concerning the regulation of the same [Jones] Charity). By the late 1820s the city was receiving over £1,400 a year from charity endowments, and held a further £1,100 capital for the loan charities, but was spending little over £600 a year on charitable purposes. The stimulus given to the guilds by the Owen Jones charity clearly began to fail after 1808, and two companies, the Fishmongers and the Dyers, became extinct apparently between 1794 and 1815. 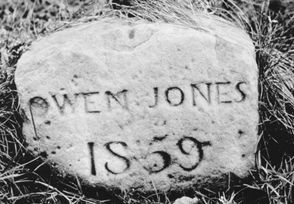 The are a number of marker stones on Owen Jones' land at Minera. These often puzzle people as they look like grave-markers and given that there are a number of them, seem to signify a particularly gruesome death! In fact, Owen was all buried in one grave, two-hundred years before the date on these stones and it was nearly a hundred years after his death that he even got a gravestone.

With the support of several of the parish vestries, interested in keeping poor rates down, a local solicitor, John Faulkner the younger, began a further suit against the Assembly in 1829. It was overtaken by the Municipal Corporations Act, 1835, which ended corporation control of the charities, and by a Chancery order of 1837, which created the independent Chester Municipal Charities Trustees and assigned them a mortgage on corporation property which was sufficient to cover the outgoings of the charities reliant upon capital sums held by the Corporation. It still took a while for some charities to be put in order - in 1836 the St John's Hospital rents were worth £600 a year, of which only £85 was spent on the alms-people, the rest being carried to the Corporation's general account as it had been since c. 1762. It was not until c.1852 that matters seem to have been cleared up.

Extracts from the paper "The City Guilds of Chester" by Frank Simpson, 1911 published in the Journal of the Chester Archaeological Society, Vol. XVIII, tell us how the stones came to be on the wall of the building in Eastgate Street:

So, there is the history behind these two bits of sculpture - A foundling left tied to the bell-rope in a Welsh church does well in Chester and leaves a bit of land which turns out to be a "goldmine" (well, a lead mine actually) to charity. The charity (occasionally being robbed by the Corporation) sells off some of the land and re-invests in some property by the Eastgate. Then along come a bunch of "Liverpool Welsh", who have started a bank and want to emphasise their honesty and Welshness, they add the memorial stones to their new Chester bank (and "Gentleman's club"), designed by eminent architect John Douglas. 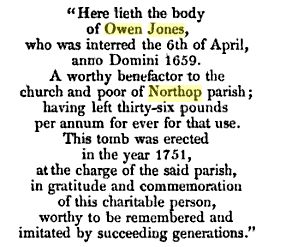