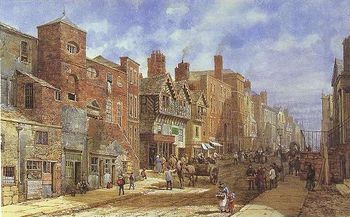 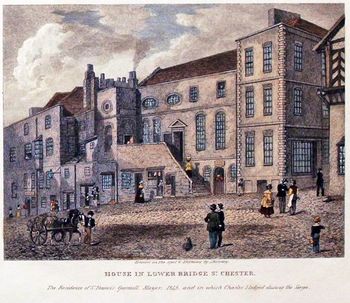 Gamul House: the brick tower shown in this and the Rayner painting is a stair tower. Compare the gallery above the shops as it was then and as it is in more recent phorographs.

Gamul House. 52-58, Lower Bridge Street has an undercroft (large longitudinal oak beam with reset joists, some replaced) at street level and service wing of two storeys. Three small one-storey shops, probably 18thC, but altered, are built against the southern bays of the undercroft and have brick barrel vaults of an 18thC type. Above and behind this is a stone built great hall of two-storey height at former Row level. An external stair parallel with the front has 15 stone steps leading to an access gallery in place of former Row to Gamul House and properties south of it. Parts of the present building date from around the early 16thC, with the oldest visible parts being the wall and fireplace behind the present bar. Following the Great Fire of London in 1666 and a Chester Assembly ruling on building in 1671, the medieval frontage of Gamul House was replaced by a brick façade.

Batenham describes the building as follows: 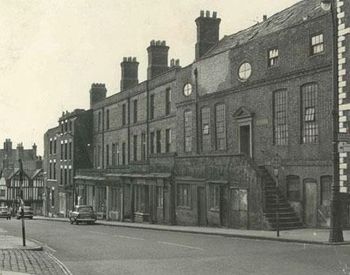 A 1960s photograph shows Gamul House and other buildings in Lower Bridge Street. 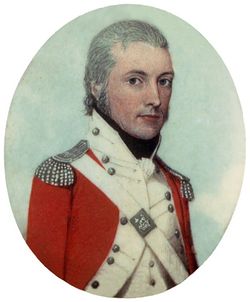 The marine Tench was the son of Fisher Tench the dancing master was Watkin Tench a marine officer who is best known for publishing two books describing his experiences in the First Fleet, which established the first settlement in Australia in 1788. His two accounts, "Narrative of the Expedition to Botany Bay" and "Complete Account of the Settlement at Port Jackson" provide an account of the arrival and first four years of the colony. The other is Francis Pickmore appointed governor of Newfoundland in 1816, where he stayed the winter, then died. The building was later been used as an organ-maker’s workshop and an antiques showroom. Also during the 1800s the stone steps were built up to a balcony outside which gave access to the great medieval hall.

Thomas Gamul was the city’s recorder and was the son of Edward Gamul, who was the mayor of Chester on four occasions. At the time of the Civil War the house was the home of Sir Francis Gamul, the son of Thomas, a Royalist supporter and colonel of the Town Guard. Charles I stayed in the house on 23–24 September 1645, when his army was defeated at the Battle of Rowton Moor. Gamul and other Royalists were dismissed from the town's administration in October 1646, and he was fined £940. Gamul died at the age of 48.

The actual details of Gamul's death are something of a mystery. Some sources state that he died at the age of 48 after an abortive uprising of 1654 for the future Charles II. If this was the case it would appear to have been a poorly documented English equivalent of Glencairn's 1654 Uprising in Scotland, and a precursor of the Penruddock uprising (1655). His son-in-law stated that he was executed at Exeter - where Penrudduck would be executed the following year. The Parish Register of St Mary on the Hill in Chester states that he was buried there on 27 November 1654, and indeed the elaborate family tombs (the most prominent of which is that of Francis' father, Thomas Gamull, d.1613) can be seen there to this day. One of the most significant outcomes of the Penruddock revolt was Cromwell's response; England and Wales was divided into eleven regions, each controlled by a senior army officer, with wide-ranging powers - in effect a military junta. Known as the Rule of the Major-Generals (1655-57), it proved deeply unpopular and united the regime's opponents against it in a way armed insurrection had failed to achieve. The Major-Gererals clamped down on what they considered to be rowdy behaviour like heavy drinking, music, dancing and fairs. They even tried to stop Christmas celebrations. In historical writings, the reputation of the Major-Gererals as po-faced killjoys attached itself to the Cromwellian regime as a whole. The district which included Chester was commanded by the extremely zealous Charles Worsley - no one suppressed more alehouses, or was more active in sequestering royalists, preventing horse-races, and carrying on the work of "reformation".

The Gamul's were involved in a curious dispute involving the latest technology of the time. In 1632 Tyrer sold his interest in the Bridgegate Waterworks by the Old Dee Bridge to a consortium headed by Sir Randle Mainwaring, but a dispute with Francis Gamul, who controlled the Dee Mills and causeway, led to Gamull's cutting off the supply - Tyrer had leased the site of his waterworks from the Gamul family, who owned the Dee Mills and an arrangement was devised by which no premises could have water unless they purchased all their flour from the mill. The matter went before the privy council who decided that Gamul must allow the supply to continue.

Francis Gamul had married Christian Grosvenor, daughter of Sir Richard Grosvenor (1st Baronet) in 1621. According to some records "they had two daughters, and his baronetcy therefore became extinct on his death" - however the records of St Mary on the Hill show that the reality may have been more complicated, with Francis and Christian having ten children, which ther survivors included Thomas, Frances, Lettice, Sidney, Alice and Christian. 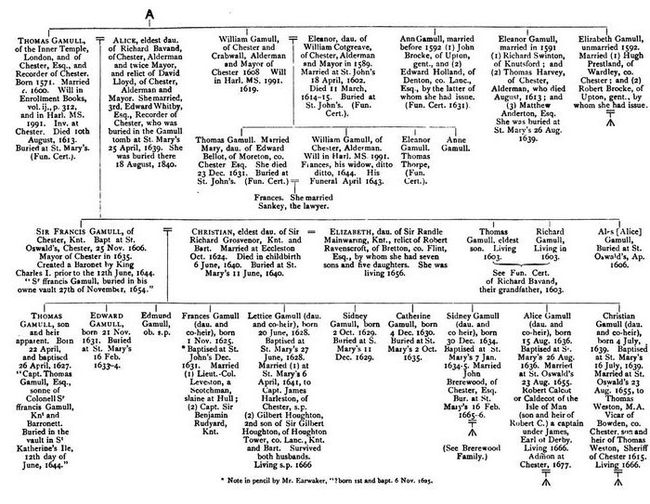 The Gamul familiy tree as assembled from the records of St Mary on the Hill is confusing.

A Lettice Whitley is said to have bequeathed St Michael's Rectory in Bridge Street to the church in 1709. According to the Chirk Castle Accounts 1666-1753, Lettice Whitley of Chester was the wife of Ralph Whitley and daughter of "Henry" Gamul, although other records show her as the daughter of Francis Gamul. She died without issue and was buried (7th April 1709) at St Mary on the Hill in Chester (the church register gives her address as "Peper Sreet"). Ralph Whitley was the son of Welshman Thomas Whitley and a younger brother of Roger Whitley (?1618-97), MP for Chester. Lettice is frequently mentioned in Roger's diaries (see for example 7th October 1690). It appears that she married three times (first to a James Harleston, then to a Gilbert Houghton, and finaly to Ralph Whitley) and survived all three husbands. The Whig MP, and sometime mayor of Chester, Roger Whitley (?1618-97) was the political foe of Tory Thomas Grosvenor (1655-1700) and the election contests between the two were fierce and often violent affairs. In 1682, Whitley antagonised Grosvenor by inviting James Scott, the Duke of Monmouth, and later rebel, to visit Chester.

So the Gamuls, Grosvenors and Whitleys represented a powerful and explosive mixture of old and new money in Chester in the unstable times of the Civil War, Restoration of the Stuarts and the Rebellions of 1685 (Monmouth) and 1688 (William of Orange).