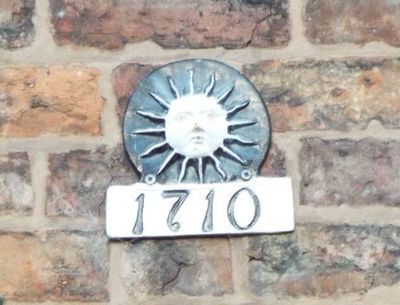 A fireplate from Lower Bridge Street: but is it real? - the cross-head screws cannot be original...and the policy number 1710 also happens to be the year Sun started operating. Sun actually only used these from much later than 1710.

History of the Fire Service

The Chester "watch" of the middle ages still exists in the "watches" of the fire service. Even in mediaeval times prevention was thought better than a call-out and from the late 16th century to the 18th the 'constables' of each ward made monthly (occasionally fortnightly or weekly) reports to the Assembly on the numbers and lodging places of the unemployed poor and beggars, often also reporting on fire hazards and nuisances. From 1591 they were responsible for storing fire buckets, and from 1709 had oversight of fire-fighting. The Assembly provided fire buckets in 1570, and "a hook and a ladder" for each ward in 1591, to be maintained by the constables. From 1599 to 1633 or later strangers obtaining the freedom of the City had to provide two buckets. In 1671 thatching was banned as a fire precaution from the roofs of houses in the four main intramural streets and Foregate Street.

The use of the buckets and ladders is obvious. The hooks, a long pole with a hook on the end, was used to pull burning material from buildings and occasionally to salvage valuables. The city's fire-fighting equipment was still limited to these same buckets, ladders, and hooks in 1695, but the new waterworks inaugurated the previous year made more effective methods feasible. The city probably bought its first "fire engine" in 1705, and in 1709 issued a comprehensive set of fire regulations, which included the following:

The Engine House by the Abbey Gate, from Batenham c1816

In 1709 the Assembly also built a fire-engine house abutting the bishop's palace and not far from the waterworks company's cistern in Northgate Street. "Ornamented with Corinthian pilasters and battlements", it was paid for by James Butler, 2nd duke of Ormonde. Hanshall describes it as follows:

James Butler, 2nd Duke of Ormonde (29 April 1665 – 16 November 1745), served in the campaign to put down the Monmouth Rebellion (1685), during the Williamite War in Ireland, in the Nine Years' War and in the War of the Spanish Succession but he was accused of treason and went into exile after the Jacobite rising of 1715. 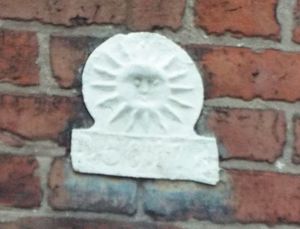 A fireplate from Upper Northgate Street: is it probably real.

However the law as regards the storage of gunpowder seems to have been ignored as on the 5th November 1772 an explosion occurred in Watergate Street:

After 1803 the improvement commissioners bought new equipment and appointed seven part-time firemen, one of whom was to maintain the engines and drill his colleagues. The water supply was controlled by an employee of the waterworks company. Fire insurance companies were expected to contribute towards the cost of new engines, though there was also at least one private engine in 1811, and another from the castle was frequently used in the city. In 1828 the commissioners had four engines, under the command of the leader of the city watch. Between 1824 and 1831 the engines were moved to a new building behind the potato market towards the north end of Northgate Street, possibly in 1828 when the waterworks company moved its cistern to that site. 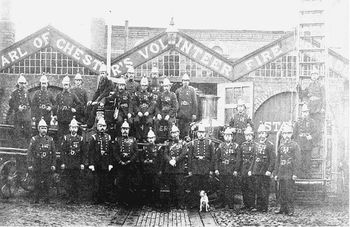 The Earl of Chester's Volunteer Fire Brigade - with brass hats, ladder and dog.

Placing the cistern (and the fire engines) at the top of Northgate street made a good deal of sense. It is the highest spot within the City Walls so it would provide the best head of water for a fire anywhere within the compass of the walls, in addition, wherever the fire-engine went it would be running downhill on its way to the fire and so would be able to reach a fire with the utmost dispatch. However while the cisterns were moved the Engines had to wait. 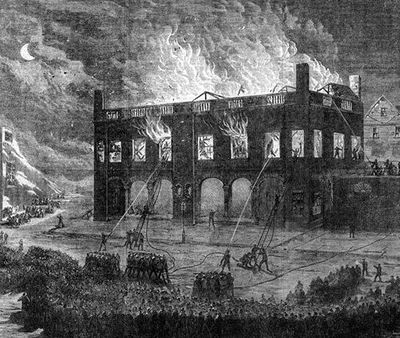 30th December 1862: The Exchange goes up in flames

Under the Municipal Corporations Act of 1835 the improvement commissioners at first retained control of fire-fighting. They disbanded the fire brigade and transferred its duties to the city council's new police force. Formal control of the fire service passed in 1838 to the city council's watch committee, which bought two new engines. Because they were larger and required more water, the committee pressed the waterworks company for additional fire hydrants and an improved supply, but until the 1860s fire-fighting was hindered by the lack of hydrants, low pressure, and water shortages; if fire broke out at night the supply had to be turned on especially. A continuous supply was gradually provided through dedicated fire mains. In 1843 the watch committee moved the engines to a rented building next to the Theatre Royal (the former St. Nicholas's chapel) and in 1854 from there to George Street. A new fire station in the potato market, planned since the 1840s, was opened only in 1856.

Disputes between the watch committee and the waterworks company after a serious fire at the racecourse grandstand in 1855 led to the collective resignation of the police force as firemen, though they were persuaded back with extra pay. At the end of 1862 the destruction of the Exchange in a fire which, ironically, started in the police office chimney, exposed the inadequacy of the water supply and the ill-discipline and ineffectiveness of the brigade, especially in comparison with the soldiers who assisted at the blaze. In the wake of the Exchange fire the brigade was disbanded and replaced by a new force, the "Earl of Chester's Volunteer Fire Brigade", with volunteer officers, paid men, and a paid, full-time superintendent responsible for drill and equipment but subordinate to the volunteer officers (an arrangement which sometimes caused friction).

Equipment was still provided by the city, which bought its first fire engine with steam-powered pumps in 1874, installed telegraph wires between the police office and the waterworks in 1876, electric bells in the firemen's houses in 1877, and telephones in the station and the captain's house in 1893. 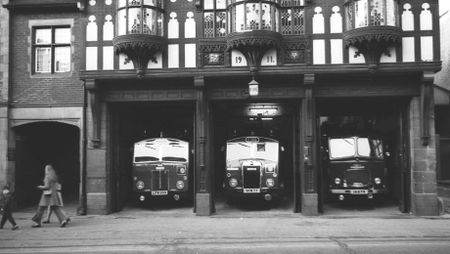 The Old Fire Station: built in 1911, at a cost of £3,000, for the Earl of Chester's Volunteer Fire Brigade, having space for three horse-drawn appliances, later (as here) fire engines, and used until the new station opened in St. Anne Street in 1970 (the new station was demolished in 2020);

The council bought the land off the west side of Northgate Street on which the fire station stood in 1900, and completed a new station, designed by James Strong as a half-timbered building with three arched entrances, in 1911. This building can still be seen at Number 73 and is now "Chez Jules" a noted "French" Restaurant. Old cottages in Valentine's Court (now "Fireman's Square") behind the station were replaced in the 1920s with six firemen's cottages and a superintendent's house fronting Northgate Street. Firemen are sometimes superstitious and both the appliance room and the control room were said to be haunted by the bewhiskered "Fireman Jack" dressed in an old-fashioned Fireman's uniform complete with brass helmet:

Meanwhile in 1914 the city council's brigade was revived, consisting of a full-time superintendent and assistant, three sergeants and 18 firemen paid retaining fees, and an unpaid reserve, whereupon the Earl of Chester's Volunteers voluntarily disbanded. More full-time firemen were appointed in the 1920s and 1930s, starting with drivers, and the unpaid reserve was dispensed with in 1937.

The first motorized fire engine was bought in 1914. The following year they received a motor appliance made by John Morris and Co of Manchester. It cost £1070 and carried a 50ft wheeled escape and a 600gpm pump. The brigade began providing a service for rural areas outside the city boundary c. 1920, and by 1937 covered Hoole urban district and Tarvin rural district, and was about to make similar arrangements with the rural district councils of Hawarden and Chester; in 1939 a substation was established at Ellesmere Port. As a preparation for war an auxiliary fire service was set up in 1938. On the formation of the National Fire Service in 1941 Chester's brigade was taken over by a district which included Liverpool and Wirral, and the city council regained control of the force only in 1947. It was apparent early in the 1950s that the Northgate Street fire station was too small and difficult of access, but a new station was opened only in 1970, on the site of the Northgate railway station goods yard. Responsibility for fire services was transferred from the city to the county council in 1974 under the 1972 Local Government Act.

In 2019 Chester's fire appliances moved into a temporary station built in the rear yard of the St Anne Street station, after storage and other buildings were demolished along with the training tower. The 1970s fire station building was knocked down in early 2020. 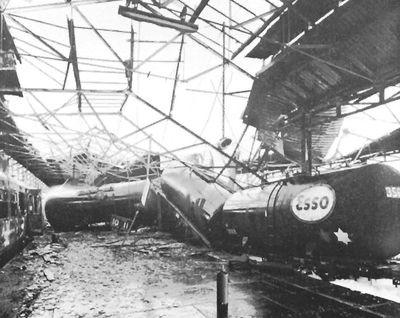 The aftermath of the Chester General fire, with the crashed oil tankers at Chester Station strewn all over the platform. Fortunately their were no fatalities as the fire was brought under control by the Fire Services before the explosive content of the train could wreak havoc. 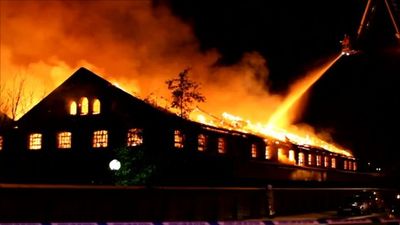 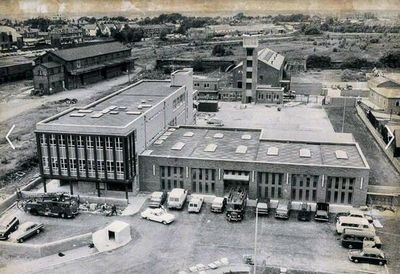