Perhaps one of the most striking buildings in Chester, it poses several interesting historical puzzles. 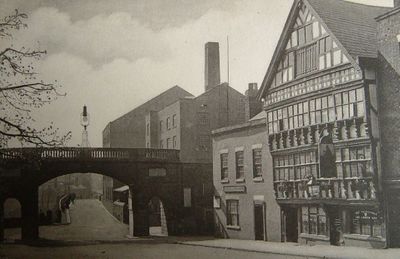 The Bear and Billet with the Dee Mills, the Bridgegate and the Old Dee Bridge. The Dee Mill burnt down several times and was demolished shortly after a final fire in 1895. The pub sign here features the original design which is much closer to the traditional "Bear and Ragged Staff". In 2021 the previous siign was replaced by the outline of a bear with no "billet". 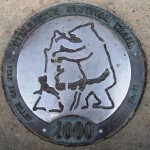 This structure is on the Millennium festival trail. The trail marker uses the original symbol. The puzzle is just how long this has been used...

The Bear and Billet was built in 1664 as the Bridge Street town house of the Earls of Shrewsbury who held the hereditary serjeancy of the nearby Bridgegate and also claimed to be Lords of the Manor in Hoole. It is sometimes said to have replaced an earlier building which was destroyed during the Civil War, although that would have left the site vacant since 1646 when the seige of Chester ended. However, the Earls of Shrewsbury at the time including Francis Talbot did have other concerns.

It was possibly, given its proximity to the Dee Mills used as a grain warehouse (in the gable are double doors and a bracket for a hoist). The building became an inn in the 18th century, although it continued to be owned by the Shrewsbury family until 1867. Its name is sometimess said to be taken from a heraldic device of the Earls that consisted of a bear tied to a billet (or stake). In the Batenham illustration it is called the "Bridgegate Tavern". The pub is also the birthplace, in 1873 of Beatles’ legend John Lennon’s grandmother (Annie Jane Millward).

The building is constructed in timber framing with plaster panels. It consists of cellars (but no undercroft), above which are three storeys and an attic in the gable overlooking the street. Each storey is jettied above the storey below. On the ground floor are two doors, one to the south and the other placed more centrally. To the right of each door is a three-light window. At the base of the first floor are 16 rectangular timber framed plaster panels. Above these is a window occupying the whole width of the facade and divided into 32 lights separated by mullions and transoms and containing leaded lights.

In the second floor storey are 12 arched timber framed panels. The window above these is similar to that in the first floor. Over this window is a further row of 12 square decorated timber-framed panels. The jettied beam to the attic storey is inscribed "16:HH:64" and has a running vine pattern. It is often rumoured (but by no means confirmed by inspection) that the front of the Bear and Billet contains well over 1664 individual panes of glass (there are currently 1620 in the lead lights on the frontage, but there may once have been more on the ground floor). In the attic is a double timber door surrounded by panels. On each side of this door, and above it, are two-light windows containing leaded lights. In the apex of the gable is herringbone timber framing.

The bargeboard is possibly the longest in Chester, carved and has a finial at its peak.

The pub has had a chequered history as a drinking establishment, having gained a reputation in the 1970's as a "somewhat colourful bikers pub" where even a breath of the air could lead to significant "intoxication". It was known to some locals as the "grin and bear it". It was closed briefly around 2000, had a short new life as a "bistro" and is now a rather up-market pub again. 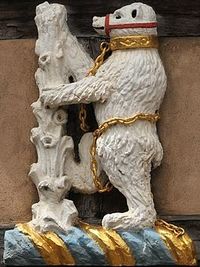 A version of the original heraldic symbol of the "Bear and ragged staff".

If the name of the inn was in use at some time before 1820 it could be very old indeed. The "Bear and Ragged Staff" is a heraldic emblem or badge associated with the Earldom of Warwick and it is posssible that the emblem used by the pub is a variant on this and may have been in use before the present building was constructed. The first recorded instance of that symbol being used can be found in the original seal and crest of the Earl of Warwick, designed before the fourteenth century, but the origins may go back earlier.

There are pubs all across Warwickshire called The Bear and Ragged Staff, some of which claim a history going back hundreds of years. Some have suggested that the bear and the staff as symbols originated separately, and were combined to indicate some alliance. One possible origin of the "billet" variant is that a performing bear might be chained to a stake, or a log, to prevent its escape. It is also possible that the name of the pub did not come into use until after 1820 when Batenham's illustration shows it as the Bridgegate Tavern. The "Bear and Billet" could simply have been adopted because it was a traditional pub name from elsewhere. Although it is by no means clear, Batenham's illustration seems to show a figure and a vertical post which is suggestive of the "Bear and Billet" sign.

There are some rather peripheral connections between the "Bear and Billet/Staff" symbol and Chester. In 1076 Henry de Beaumont was created Earl of Warwick. The male line ceased in 1242 when Thomas de Beaumont, 6th Earl of Warwick died without male issue. A female descendant named Isabel was mated to Simon de Lis, 2nd Earl of Huntingdon. They had no family and on the death of Earl Simon, and the title appears to have passed to David. Earl David was succeeded by his son John Canmore, who was also effectively the last non-royal Earl of Chester (died, possibly murdered, 1237). The passage of the title and symbol via this route is however disputed, although there is cleare evidence that the symbol reached Lindores Abbey (Scotland) this way. The abbey was founded by David, John Canmore's father, and the symbol had not only been found on stones there but it is still used in connection with spirits produced in the area. Other Earls of Warwick include Richard Neville (1428-1471), 16th Earl of Warwick and John Dudley (1504–1553), 1st Duke of Northumberland each of whom influenced successions to the English throne. The Bear and Ragged Staff in Cumnor (Oxfordshire) is associated with Robert Dudley (1532-1588), Earl of Leicester, known as a possible lover of Elizabeth I and possibly also the murderer of his wife, Amy Dudley. Dudley was chamberlain of Chester from 1565 to 1588 and may have organised a perfotmance of Queen Dido at Chester as part of his plans to woo the queen. The political factions which could have used the symbol in the late medieval period, or in Tudor Chester as "the sign of the bear and ragged staff" are incredibly difficult to disentangle - if, that is, the use of the sign dates back that far.

There was once a "Bear and Ragged Staff" publc house in Tattenhall, but it is not known whether this had any connection with the Bear and Billet in Chester.

The Bear and Billet is said to be haunted by a friendly old lady who greets visitors and then disappears.