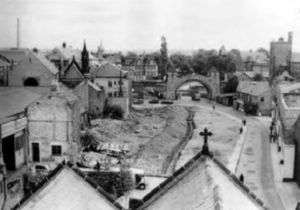 The Inner Ring Road development widened Pepper Street, for which the original course can be seen in this photograph. The photograph shows the Newgate and is taken from the tower of St Michael's. The tall chimney on the left is at the Leadworks, while the tower on the right (with stone lion just visible) is the Lion Brewery - soon to be demolished. 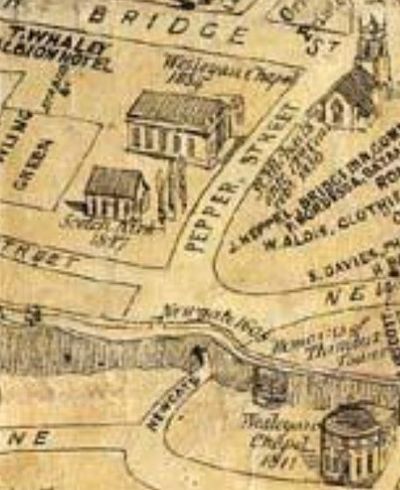 Pepper Street,as shown in a preparatory sketch for the "View from a Balloon". The "Wesleyean Chapel" is shown

Pepper Street runs from the division of upper and lower Bridge Street to the Newgate, and follows what would have been the line of the southern wall of Roman Chester, before the City Walls were extended by the Saxons. Access can be gained into Park Street and Newgate Street.

The record of the "names of the streets and lanes in the days of KIng Edward III" lists Pepper Street as follows: 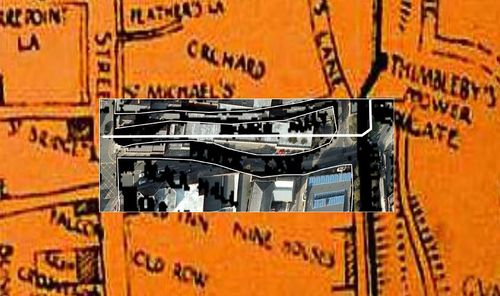 This composite map/image shows Pepper Street and the now vanished Pepper Alley. The approximate line of the walls of Roman Chester is shown as a thicker white line on the image section. Pepper Allay can be traced in the image using the plot boundaries.

The rest of that story is discussed under "Wolfgate".

The Wolfgate was, by the 1930's, decayed and inconvenienly narrow so the New Gate was cut through the walls. New Gate is an arch bridge carrying the walkway of the city walls over Pepper Street. The bridge was built in 1938 to relieve traffic congestion in the city, especially at the High Cross and is constructed in red sandstone. It was designed by Sir Walter Tapper (who died before it was completed) and his son, Michael. On each side of the bridge is a tower containing mock loops (unglazed slit windows) and surmounted by hipped roofs. Flights of steps on each side lead up to the towers and to the walkway across the top of the bridge. The structure is decorated with carved shields and Tudor roses.

North of Pepper Street lay Pepper Alley, now almost entirely vanished, apart from some lineation in the plot divisions. This feature of streets being paired along the line of walls of Roman Chester occurs elsewhere, notably at Whitefriars/Cuppin Street and Weaver Street - Trinity Street/St Martins Way. It is thought that the innermost street in each case would have been the "intervallum", which served to catch enemy missiles, as an access route to the wall (vallum) and as a storage space for cattle (capita) and plunder (praeda). In established fortresses this space contained the "Via Sagularis", which survives today as Whitefriars, Weaver Street and Trinity Street - and would have also once been Pepper Alley.

The Lavaux Map shows a building on the south side of Pepper Street as inhabited by "Capt. Lawranson". This appears to be "Black Hall", said to have existed since at least as early as 1369, when it was known to have painted internal walls and was the subject of a letting agreement, in which the owner retained the stables and the principal apartments, the stone and painted chambers. A record from 1405 states that it belonged to John Ewloe, and by 1465 it was in the hands of Thomas Walley, passing next to a parson, Robert de Crouton.

Also on the south side of the street lay Daresbury Hall, which in the 13th century belonged to the mayors Walter de Livet and Ranulph of Daresbury. 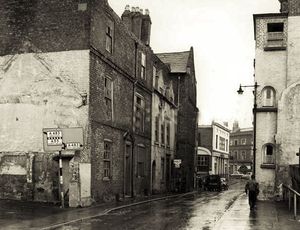 A run-down Pepper Street, in 1959, looking towards Bridge Street and before it was widened.

Pepper Street was also decayed and inconveniently narrow by the 1960's, when Pepper Street was widened. The ring road required massive demolition. It did enable the city centre to be freed from traffic, but at a high price in terms of the great swathes of historic fabric which were lost, such as at Pepper Street, Nicholas Street, Linenhall Street and Cuppin Street – here the fine grain of narrow Georgian streets was replaced by a larger and more open block form. 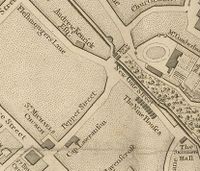 Newgate Street, Park Street and Pepper Street from the Lavaux Map of 1745.

Few of the writers of historical guide-books on Chester have much to say about Pepper Street. Hemingway writes of Pepper Street in a quite dismissive tone:

There is only one remaining building of substantial architectural note in Pepper Street, and that is the old "New Connection" Church. It opened in 1835 having been designed by William Cole, and closed shortly after World War One, when the building was sold. Shortly before designing the building William Cole had visited Greece during a long holiday after the completion of the Grosvenor Bridge.

For many years the chapel was hidden inside the facade of a later motor garage (see comparison photographs below) and was only "rediscovered" during conversion work in 1984, when another part of the building became a "Habitat" store (now closed). As of 2014 it was vacant (and being rapidly overgrown with Buddleja davidii (Buddleja). It has been said that in 1836 Joseph Hemingway considered this the most handsome chapel in Chester. However, in his "Panorama" (1838) Hemingway notes the following, after writing about one Methodist church:

However he later adds (despite having been so dismissive of Pepper Street):

It has been suggested that elements of St Bridget's church were incorporated into the structure of the chapel, but this seems impossible, as the chapel opened in 1835 while St Bridget was built in 1826 and only demolished in 1891. What was probably meant was not that stonework was re-used but that the buildings had the same architect (William Cole) who used a four-column frontage on both buildings.

An aircraft factory is perhaps the last thing you would expect in Pepper Street, but parts of the Spitfire were manufactured here during WW2, when the motor garage was used for that purpose. After WW2 "Anchor Motors" briefly became a successful manufacturer of model aircraft engines, although this ceased when they returned to military manufacturing (portable generators) during the Korean War (1950-53). 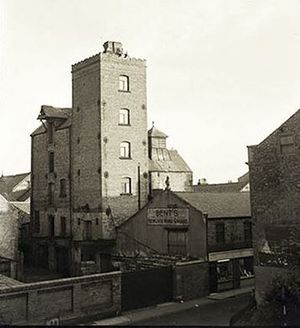 The brewery (with lion) and a rather run-down Pepper Street, before it was widened.

To the East of the St Micheal's Church, in Pepper Street, stood William Jones’ almshouses, established by Jones of the Middle Temple, who gave to local trustees a newly built brick almshouse in 1658 for six women and four men, all of whom had to be over 55, regular churchgoers and had to be: 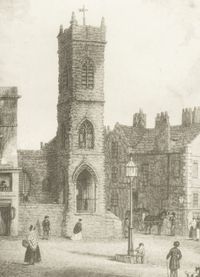 The Bridge Street end of Pepper Street, in the early 1800's. The church is St Michael's - now the Heritage Center. The building behind the lamp-post is "Black Hall", long since demolished.

The trust was supported by an estate in Chester and Holt. Broster mentions them as:

The cottages in Pepper Street were sold in 1948 and later demolished for the development of the Grosvenor shopping precinct. Under a Scheme of 1960 four bungalows in Upton were bought as replacements; a further Scheme of 1969 allowed the trustees to sell them and buy instead the then recently restored "Nine Houses" (actually now only six in number) in nearby Park Street.

The car park just before New Gate stands on the site of the "Chester Lion Brewery Co Ltd", Pepper Street, founded 1642 - Registered in 1896 by Thomas Montgomery as the Chester Lion Brewery Co. Ltd. It was said that underneath it was a tunnel used to sally the besiegers during the Civil War. Although many have looked for this and other Tunnels, none have found it - however there is something in the wall fronting on the Roman Gardens which looks like a blocked-up tunnel.

John Lightfoot Walker, who owned the brewery in the 1880s, claimed that the brewery was founded in 1642, but what grounds he had for this belief is unclear. The BreweryPedia page for the Lion Brewery states that in 1768 a Mrs Wilbraham took over the business following the death of her husband. Paul Hurley in his book Cheshire Brewing adds that it was run by the partnership Whittle and Jones in 1846 and was sold to another partnership, Walton and Clare, in 1873. It is unclear where these details come from, as neither source provides references. 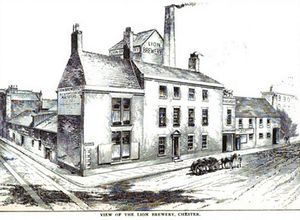 The brewery (with lion) as pictured in "The noted breweries of Great Britain and Ireland".

By the late 19th Century there was certainly a brewery of this name on the site. From contemporary advertising for the brewery it seems to have been in the hands of a G.F. Clough, who entered into partnership with Liverpool architect Thomas Henry William Walker, an architect from Liverpool, and his brother John Lightfoot Walker sometime around 1882. In 1885 G. F. Clough withdrew from the partnership. In December 1888 the Liverpool Mercury reported that the remaining partnership in The Lion Brewery was dissolved when Thomas Walker retired and John Lightfoot Walker (1851-1925) was left in sole charge. Thomas H. W. left his mark elsewhere in Chester as he appears to have been the architect of "The Beehive" in Hoole Road, and some of the buildings which surround it. In 1891, volume 4 of Alfred Barnard’s Noted Breweries of Great Britain and Ireland was produced, and he describes the brewery in great detail, an invaluable, and somewhat mouth-watering, source of information.

On the roof of the lift shaft of the car-park which replaced the brewery one can see the statue of a lion. The story of the lion is told as follows:

The Wolfgate and the New Gate as seen from Pepper Street in 2015. To get onto the City Walls hereabouts take the stairs through the archway at the rear of the van on the right of "no U-turns". 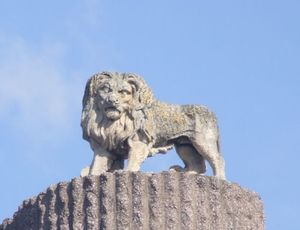 The "Coade Stone" Lion (once the symbol of "Lion Brewery") on the elevator shaft at the Pepper Street car park.

The lion is made of a material called Coade Stone or Lithodipyra (Ancient Greek (λίθος/δίς/πυρά), "stone fired twice") a stoneware ceramic that was often described as an "artificial stone" in the late 18th and early 19th centuries. It was used for moulding Neoclassical statues, architectural decorations and garden ornaments that were both of high quality and remain virtually weatherproof today. Produced by appointment to George III and the Prince Regent, it features on St George’s Chapel Windsor; The Royal Pavilion, Brighton; Carlton House, London; the Royal Naval College, Greenwich, and a large quantity was used in the refurbishment of Buckingham Palace in the 1820s.

Another of these lions, sometime wrongly said to be from the same brewery company (it crowned the parapet above the Thames frontage of another, quite separate, Lion Brewery beside Hungerford Bridge), still adorns the south side of Westminster Bridge in London. This is the same "brewery lion" stood in front of the Lion Brewery in Lambeth from 1837 until the site was cleared for the Royal Festival Hall in 1948. It was preserved "at the express wish of King George IV" and his "brother" now can be found outside the Rugby ground at Twickenham. It may be appropriate that this quintessential symbols of Englishness should once have adorned a brewery.