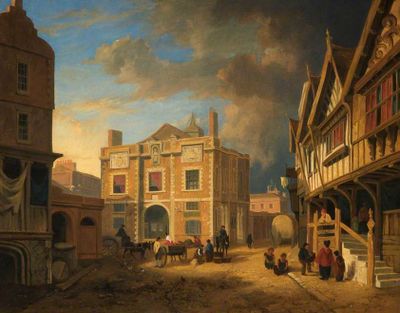 An 1831 view of the Market Square by David Hodgson (the original is in the Grosvenor Museum. The large building is The Exchange (where the Brosters had their bookshop), before its destruction by fire in 1862.

The BROSTER family, were printers of Chester and Bangor. PETER BROSTER printed an edition of Y Llyfr Plygain at Chester in 1783. In 1807 JOHN BROSTER started in business at Bangor; he was probably the John Broster who had been apprenticed to W. C. Jones, printer, Chester. John Broster lived at Brook Lodge, Flookersbrook, described it in his version of The Chester Guide (1828) as follows (without mentioning that he lived there):

John Broster's son, CHARLES BROSTER, was owner, publisher, and printer in 1817 of The North Wales Gazette, a newspaper of which the first number had been produced at Bangor on 5 Jan. 1808; on 4 Oct. 1827 it became The North Wales Chronicle, its owner and printer then being JOHN BROWN (d. 1847), who had also served his apprenticeship in the Chester office of W. C. Jones. In the meantime John Broster and his son had continued to print and publish at Chester. They issued Tour from Chester through North Wales in 1802, whilst at least two Welsh books were issued by them in 1807.

The Brosters's were based at The Exchange, in Northgate Street, which was destroyed by fire in 1862.

In 1803 one of the Broster family was involved in a fight between the Press Gang and the Chester Volunteers. Hemingway records : "Dec 28: A rupture between the press gang and some individuals of the volunteers. The Northgate broken open and a prisoner liberated" and adds in his 1804 entry "Oct 26: Mr Broster opposed for sheriff by Mr J Williamson in conseqence of the part his father took in the squabble with the press gang. Mr Williamson returned sheriff."

Peter Broster produced the first specific guide to Chester for "tourists" in 1781. This was later revised and re-issued in 1810 and 1821 by John Broster.