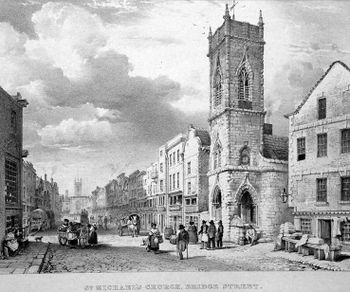 Upper Bridge Street by G. Pickering. Published by John Seacome, c1840. The two buildings shown at the sides of the engraving have since been demolished to make way for the inner ring road. 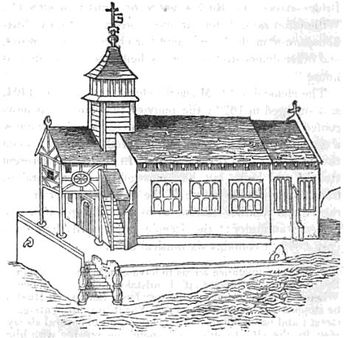 St Michael's (before c1700) by one of the Holmes's), as reproduced in Hemingway's "Panorama"

St Michael's Church on the corner of upper Bridge Street and Pepper Street is decribed by Batenham as follows:

The former parish Church of St Michael, now the Heritage Centre comprises elements from the 14thC, 1496, 1678 and 1849-50 when the stonework was largely replaced by James Harrison. The Building was stripped of furnishings 1972-5 (after which it was used as a heritage centre). The south end of the Bridge Street Row passes through the open first stage of the tower, also serving as the west porch, with stone steps up to the main Row north and down to the pavement, south. The interior has a C15 north arcade with octagonal piers, and a chancel roof of 1496, which is narrower than the present building which was widened in 1678, and a monument to Roger Comberbach, 1771 by Benjamin Bromfield (a sculptor, designer and manufacturer of marble fireplaces which he supplied to stately homes including Chirk Castle in Denbighshire).

History of the Church

St Michael's (1849) just before rebuilding by Harrison - the rest of Chester seems to be missed out.

In the mid 12th century a 'monastery' of St. Michael in Chester was supposedly among the gifts of William fitz Niel to Norton priory. It was presumably the 'mighty minster' of St. Michael later said to have been burned in the great fire of 1180. A parish church with the same dedication, apparently on the existing site, was first mentioned in 1178. The parish was entirely intramural and its boundaries suggest that it was formed at the same time as its neighbour St Bridget's. It was united with St Olave's in 1839, and was incorporated in the new parish of Chester in 1972, when the church closed for worship.

St. Michael's was probably in the charge of a parochial chaplain in the Middle Ages, but the identity of the patron or appropriator is unknown. If the church was indeed William fitz Niel's then the advowson was presumably held by the canons of Norton, at least until the earlier 14th century, though it was not among their possessions at the Dissolution. After the Reformation the benefice was a perpetual curacy in the gift of the bishop of Chester. 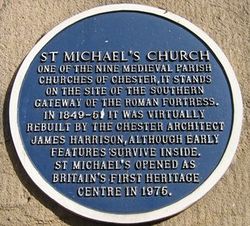 The Blue Plaque at St Michael's

A chamber over the west porch may have served as a parsonage house in the late 16th century. In the early 17th the minister was given a house in Bridge Street Row. No. 43 Bridge Street, a mid 17th-century timber-framed building, was left as a rectory house by Lettice Whitley, in her will of 1708, and was used as such, perhaps intermittently, until 1907. The small churchyard, first mentioned in the 1480s, was closed in 1854.

Provision for chantry priests, perhaps temporary, was made in 1384, 1439, and 1505; by the mid 16th century there was perhaps one chantry chaplain in addition to the incumbent.

The church contained an image of St. Michael by 1401. It possessed relatively few vestments and ornaments, and those sold by the royal commissioners in 1553 realized only 5s. 9d. The vestments and other appurtenances of catholic worship, including an altar stone, dismantled and in a coffer, survived until 1565, after which they were sold and the remaining Marian fittings were taken down. The rood loft and the vaults over the two altars survived until 1568.

The poverty of the living caused it to be held in plurality with St Olave's in the mid 16th century and the 1630s. Nevertheless in the early 17th century the church was apparently used for civic services, for in 1606 and 1609 Randle Holme (I) was paid for painting the rest for the city sword. By 1633 St. Michael's was much neglected, the chancel full of pews, and the incumbent accused of failing to catechize and to church women correctly. Further disorder culminated in the parishioners' destruction of the chancel screen, and in 1637 they were ordered to erect a new one, make the seats in the chancel uniform and facing the holy table, and receive the sacrament not in their pews but at the altar rail. The instructions were observed only until 1641–2, when the screen and altar rails were removed.

During the Siege of Chester in the 1640s Civil War the church was used as a prison. The prisoners were not to have 'meat, drink, candles, light or Tobacco by especial order from the Commissioners such were their cruelty'.

By 1650 the parish had a strongly Presbyterian minister in William Cook. Arrested for aiding Sir George Booth's rebellion and taken to London in 1659, he had returned by 1660, when he gave £10 towards restoring the seats in St. Michael's, but he was ejected in 1662 for refusing to conform. Thereafter the church seems to have had no minister until John Hancock was presented in 1685. The congregation, however, retained its nonconformist sympathies, and in the 1680s Hancock's Wednesday and Friday lectures were attended by the Presbyterian Matthew Henry (in 1860 a memorial was erected in Chester to commemorate Matthew Henry - an obelisk designed by Thomas Harrison that incorporates a bronze medallion by Matthew Noble - it originally stood in the churchyard of St Bridget's Church, and was moved in the 1960s to stand on the roundabout opposite the entrance to Chester Castle).

Throughout the 18th century the living was held by prebendaries or, more usually, minor canons of Chester cathedral. In 1778 holy communion was celebrated monthly and on the great festivals, and communicants numbered between 70 and 120. Thereafter attendances declined to 50 or fewer in 1825. From 1826 the incumbent, Joseph Eaton the younger (1796–1850), who was clerk to the cathedral chapter, employed a curate, and assistant clergy continued to be needed under his successor James Haworth (1850–93), who became insane. St. Michael's retained a tradition of moderate Anglicanism, with in the 1870s holy communion generally restricted to a weekly early celebration, an arrangement which persisted largely unchanged in the 1930s. 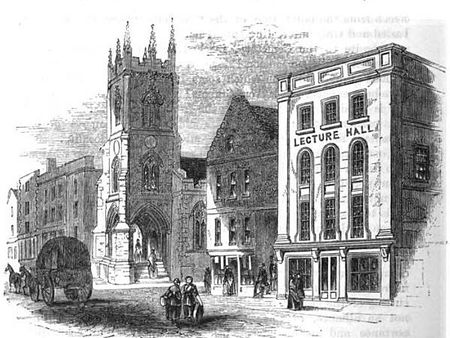 St Michael after rebuilding by James Harrison. The former Lecture Hall at the upper end of Lower Bridge Street can also be seen in this engraving.

The redundant church of St. Michael is a mostly 19th century rebuilding of a much repaired medieval church. It is of buff-coloured sandstone and comprises a chancel with a north chapel, and a nave with a north aisle. Since it is built over the remains of the eastern abutment of the south gate of the legionary fortress, its entrance is well above street level. There has been a church at the bottom of Bridge Street since the 10th century. Exactly when St Michael's was built is not known, but fragments of 12thC masonry were discovered during restoration c. 1850. The earliest part of the present structure, the north arcade with its octagonal piers, probably dates from the 15th century; money was left for building work in 1413 and 1439. In the 1490s the chancel was rebuilt, and it was probably then that the arch-braced roof with decorated panels was installed. 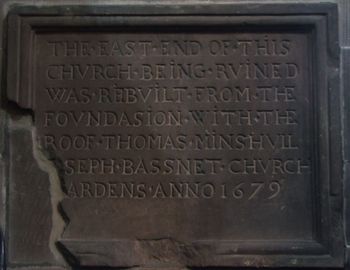 A "pre-blue" plaque at St Michael's

In 1582 the church was almost entirely rebuilt with a slate roof, a wooden steeple, and a porch chamber (presumably like the rectory house at St Peter's). Parish records survive from 1560 and from the Churchwarden's Accounts, it is apparent that the church was practically rebuilt in 1582. Thirty-one 'tymber treese' were obtained from Wrexham. The work also required 3,000 double and 2,000 single slates and it took two labourers four days to take down the roof. A crane was brought from Chester Castle to raise a new one. In 1610–11 further work was done, including a carved ceiling and, probably, the nave roof, which has tiebeams and crown posts.

The church suffered in the Civil War, and c. 1678 the chancel had become ruined and had again to be rebuilt, the surviving medieval roof being adapted to fit the new structure, which was perhaps extended northwards. This rebuild was recorded by a plaque which can still be seen within the church (see photograph).

New problems arose in the 1840s the interior of St Michael's had become inconvenient, unsightly and dilapidated with the new tower being declared unsafe. By the 1840s the south and east walls of the church were also revealed to be in poor condition and whole church was unsafe. Between 1849 and 1851 it was virtually rebuilt in a late Decorated style by James Harrison, only the north arcade, part of the north wall, and the roofs (but not the ceilings) being retained. The west doorway and parts of the porch are said to have been moved to Grosvenor Park. Apart from the north aisle and chancel roof, which date from the 15th century, most of what can be seen today is James Harrison's work. The tower is in three stages. The south end of Bridge Street Row passes through the open first stage of the tower, with stone steps up to the row to the north and down to the pavement to the south. The second stage has two-light windows with a clock face on the west side and a blank clock-face panel to the south. The third stage has bell openings, above which is a string course with gargoyles. On the top is a crenellated parapet with eight crocketed pinnacles and a wind vane. The south wall is also crenellated.

After the closure of the church in 1972 it was reopened by the city council as a heritage centre in 1975. Now it is run by Cheshire West and Chester Council, which took over from the city council in 2009. In December 2017 the Heritage centre closure was announced as use of the building had been tranfered to become a "Tourist Attraction". The Heritage Centre will move in January 2018 to the Grosvenor Museum. 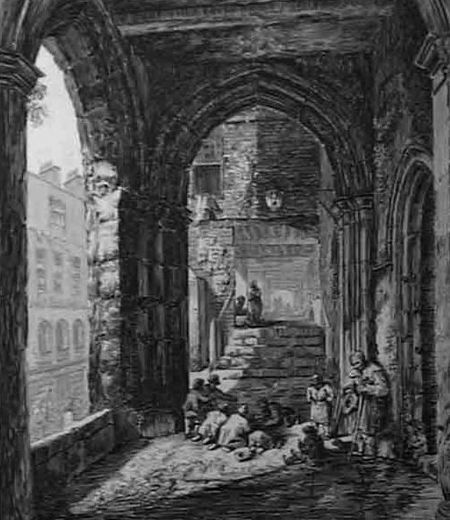 St Michael's porch by Cuitt - the "Three Old Arches" can be seen over the street, through the porch archway which is now among a collection of relics in Grosvenor Park.

Chester History and Heritage wss a valuable resource if you want to discover your Chester ancestors or find out about the history of Chester City and District. Due to the historic nature of St Michael's church there is, unfortunately, no access for wheelchair users. They host a wide variety of family and local history sources to help you in your search. These include:

The staff are incredibly helpful and there is an extensive and perhaps unique collection of books on Chester. In May 2018 the Heritage Center relocated to the History Hub at the Grosvenor Museum. 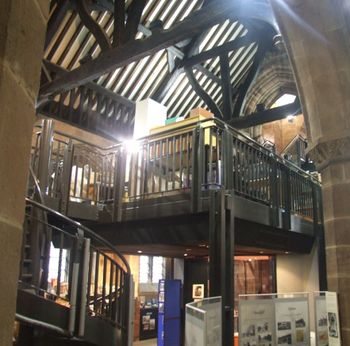 The Heritage Center at St Michael's in 2014 - showing the exposed roof structure - the octagonal piers of the north arcade and the chancel roof of 1496 have been retained.