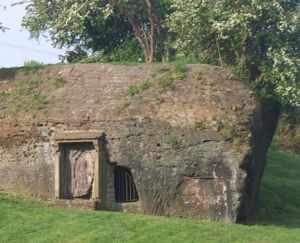 The Minerva Shrine. The stone columns and awning over the shrine are a 19th-century addition, placed there in the hopes of warding off further damage.

The Minerva Shrine in Edgar's Field is the only surviving rock-cut Roman shrine which is still in situ at its original location in the whole of western Europe. It dates from around AD 79, during the time of Vespasian, when the same area was being used to quarry stone for the construction of the Roman fortress (and, years later, possibly also Chester Castle) just over the River Dee. It may have been the shrine of quarry workers, or it may have been used by travelers about to cross the River Dee (by a ford) - Minerva was Goddess of both craftsmen and travelers.

In Greek and Roman mythology, the palladium or palladion was a cult image of great antiquity on which the safety of Troy and later Rome was said to depend, the wooden statue (xoanon) of Pallas Athena that Odysseus and Diomedes stole from the citadel of Troy and which was later taken to the future site of Rome by Aeneas.

Minerva is the Roman analog of Athena, although the Romans did not stress her relation to battle and warfare as the Greeks did. The Roman story is related in Virgil's Aeneid and other works. Rome possessed an object regarded as the actual Palladium for several centuries; it was in the care of the Vestal Virgins for nearly all this time. In her aspect as a warrior maiden, Minerva/Athena was known as Parthenos (Παρθένος "virgin"), because, like her fellow goddesses Artemis and Hestia, she was believed to remain perpetually a virgin. Athena's most famous temple, the Parthenon on the Athenian Acropolis, takes its name from this title. Her festival date was Quinquatria which was celebrated from the 19-23 of March. The older festivals were of Etruscan origin and were to celebrate the Spring Equinox, the spring rebirth rites of women. 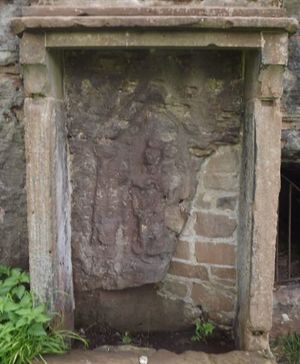 In English, since around 1600, the word "palladium" has been used figuratively to mean anything believed to provide protection or safety, and in particular in Christian contexts a sacred relic or icon believed to have a protective role in military contexts for a whole city, people or nation.

The Shrine at Chester

The Roman Road headed south from here to the cattle trading site at Bovium (Tilston). In medieval times the figure was thought to represent the Virgin Mary and this may have saved it from destruction by vandals or quarrying. Indeed, during the Middle Ages, many attributes of Athena were given to the Virgin Mary, who, in fourth century portrayals, was often depicted wearing the "Gorgoneion" helmet or amulet.

However, almost 2000 years of Chester weather have left the stonework badly damaged and no doubt 'acid rain' has caused further damage in recent times. Worse still, in 1958 defacing the shrine became a popular pastime for the youthful yobs of Chester: one boy wearing football boots was found with his leg through the protective iron railings of the shrine (since stolen) kicking bits off it. The owl, said to have been quite well preserved until 1957 is now just a lump in the rock.

The Minerva shrine is located in Edgar's Field about 200m from the south end of Handbridge Old Dee Bridge. Edgar was Edgar the Pacific - some say he was the first king of all England (and you can find his sandstone 'gate' just at the other side of the bridge). The Minerva shrine is well sign-posted, but to get there just cross the Norman bridge (Old Dee Bridge) and turn right past the Ship Inn then follow the path past the playground. The shrine is on the rocky outcrop to the left of the path. The outcrop used to have a pavilion perched on top of it, it did not look right.

It's a quiet part of town now. The ringing of hammers breaking stone and the grunts of slaves hauling quarried rock have long since fallen silent. The roar of the weir is muted in the distance behind the calls of gulls on the tidal part of the river and the sounds of children in the local playground. Climb the low hill to the north for a view of the river or walk further down the path to arrive at the house named "Nowhere". Don't forget this is a unique experience, perhaps the only shrine from Roman times left as it was meant to be. There is 240 million years of geology written boldly in the rock, and two thousand years of human history fading fast.

It is a rock carving in the middle of a field so standing and looking at it costs nothing. If you wish to leave a small donation for the Goddess Minerva, like a bunch of flowers, or a few denarii that's up to you.

A drawing of the Minerva Shrine as it probably was originally painted in Roman times.

Her worshipers have long since turned to dust. Time and vandalism mean that Minerva is slowly fading back into the rock from which she was carved. Some mindless idiot has even removed the informative signage placed here by the council - hopefully they have been plagued with bombardment by owls with diarrhea ever since.

Any day to visit is a good day. 19th March is probably the best.

Surely this is an error. There is a cast (replica) of the Minerva Shrine in the Grosvenor Museum - or perhaps is that the real one? No other source mentions the supposed replacement of the original shrine with a replica.