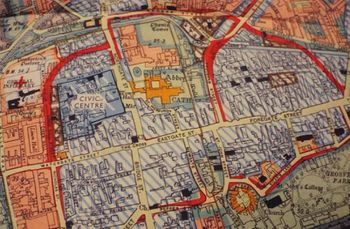 King Street was seen as a route for the ring-road.

Between the "Pied Bull" and the "Red Lion" on Northgate Street is one end of now elegant-looking King Street. This was formerly known as "Barne Lane" as it once led to a large tithe barn belonging to the Abbey. King Street was known as ‘Barne lane’ throughout much of the medieval period. First mentioned in 1238 as "venella prope grangiam abbatis Cestrie" ("way to the grange of the Abbot of Chester") by 1265 it had acquired the name ‘bernelone’. The name suggests the presence of barn or grange belonging to the abbot on or near the street, believed to be at the Crofts. On a list of street names produced by Richard Dutton mayor of Chester in 1567 it was still called thus. It first appears clearly on the John Speed map of 1610, having been omitted by earlier map-makers. By 1656 it was suppposedly called King Street, although the Lavaux Map of 1745 still names it Barne Lane.

On the King Street wall of the Pied Bull is what looks like a sculpture based on the "Chester Imp" at the Cathedral. This is a part of the "Chester Imp Trail" and, not, as some seem to think, a "Fire Insurance Mark".

The initial plans for the Inner Ring Road, drawn-up by City Engineer and Surveyor Charles Greenwood in 1945, called for the clearance of much of King Street to join Northgate Street within the city walls. From there, it would pass through a widened Northgate and down George Street. As part of this plan the "Blue Bell" in Northgate Street would be demolished in order to widen the road, as would have been parts of the Northgate. Indeed the Blue Bell had been acquired by the City Council in the 1930's for the purpose of road-widening. Fortunately, this plan was dropped in 1960 and a new plan adopted which had the Inner Ring Road follow its present route outside the Northgate. However, the prospect of demolition led to many years of neglect for the properties in King Street, and many became delapidated. Once the plans had changed houses in King Street were renovated (almost all are dwellings) and the area became a fashionable place to live within the city walls.

Other aspects of Greenwood's plan related to the "dignity and importance of the work of the local authority" as well as "leading to the economy and efficiency in the administration of the services". The plan included the demolition of the old art gallery and museum and construction of a new one, a concert hall, library, health clinic and police headquarters - all from a very 1940's view of what society needed. The existing Town Hall would be retained but would eventually be replaced by "something more suitable".

Looking down King Street from Northgate Street. Both the Pied Bull and the Red Lion are said to be haunted - see The Mystery Tour. 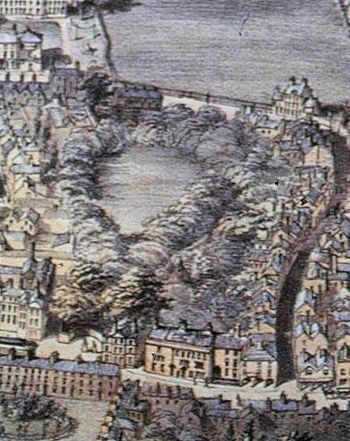 From John McGahey's "Balloon View" of Chester (1855) - Hunter Street does not yet exist but the buildings at the end of King Street are clearly recognisable as the Pied Bull and the Red Lion.

Evidence of possible Roman cultivation soils were recorded during archaeological investigations at King Street in 2003. The earliest deposits recorded comprised a greyish brown clayey silt interpreted as possible cultivation soil horizons at a depth of approximately 0.9-1m below present ground level. The earliest deposits in a second trench comprised a layer which contained a moderate amount of Roman ceramic building material, bone and pottery interpreted as a yard surface. A linear feature on a north south alignment was then cut into this layer, interpreted as a possible gully.

It is assumed that this location within the Roman Fortress would have contained barracks and so King Street probably dates from after the end of Roman Chester and it may even date from after the establishment of the Abbey in Norman times.

A survey of the cellars at No 24 & 26 King Street in 1975 indicated they probably predated the 19th century townhouses currently occupying the site. The opportunity to examine the cellars arose during the adjacent Northgate Brewery excavations and following a thorough cleaning of the masonry it was suggested they were significantly earlier in date that the buildings above. Although no reliable dating evidence was produced the construction of the cellars indicated a late medieval date. The above ground structures presently consist of a pair of mid 19th century three storey townhouses heavily restored in the mid 1970s. 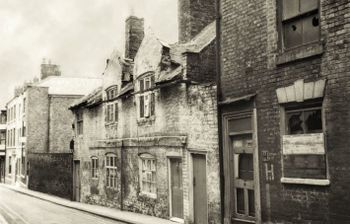 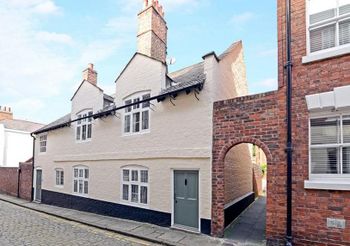 No 1-3 King Street consists of a pair of two storey cottages built around 1800 but since heavily restored. Much of the original interior has been removed. They are of brown brick in English garden wall bond with a grey slate roof with a ridge parallel to the street.

No 6 King Street is a mid 18th century small town house. Built of brown brick in English garden wall bond with a grey slate roof, it is three storeys high and a single bay wide. The is a lozenge-shaped datestone inscribed B:IM:1735

No 8 King Street is a mid 19th century (probably c1860) three storey, small, town house. It was heavily restored in the 1970s. The front facade is rended. This property originally included a granary and later a stable, but the latter had been replaced by a garden by 1863. The Corporation rented the property from 1913 until they acquired it in 1925. It was resold in 1973 and restored.

No 5-9 King Street consists of two wide fronted town houses of a late 17th to 18th century date with later alterations including the subdivision of No 5 into two properties c1720. They are of stone dressed brick with evidence of cellars below. No 9 King Street has a lead rainwater head and pipe, west, inscribed E: TM: 1783 - the probable sequence of development is east wing 1720 or earlier; front portion of west wing mid C18 or earlier; stair and rear west wing 1783 or later.

No 10-14 King Street consists of three small three storey town houses of a 17th-18th century date. They are of brown brick with Flemish bond to the front and rendered to the rear. All were significantly restored in the 1970s.

11-19 King Street are a terrace of five town houses of an 18th century date but extensively altered in the 1970s. The buildings are three storeys with a cellar and grey slate roof with a ridge parallel to the street. They have an inserted or altered carriage entrance.

No 16 King Street consists of a small three storey town house of a mid 19th century date. It is of brown brick in Flemish bond. It has been significantly remodelled.

No 18 King Street consists of a small three storey town house of a late 18th century date. It is of brown brick with a Flemish bond and a grey slate roof

No 19a King Street is a former showroom and warehouse of mid to late 19th century date. Built in the Classical style there is a painted, rusticated ground floor with hard red brick above and a grey slate roof with a ridge parallel to the street. The building is of three storeys with a central sash window and diagonally boarded double vehicle doors to the east and late 20th century hardwood glazed showroom doors to the west. To the rear there are large two storey storage buildings.

No 20-22 King Street consists of two small three storey town houses of an early 19th century date (c.1800), built in brown brick with Flemish bond. The roof is grey slate with a ridge parallel to the street. No 22 has lower windows are of golden section proportion.

No 21-25 King Street consists of three small town houses of a late 17th-18th century date, but largely restored in the 1970s. The houses are two storeys with an attic level and brick cellar below. They are built of brown brick in irregular bond with a grey slate roof parallel to the street. No 21 has a two brick barrel vaulted cellars.

No 27 King Street is a mid 19th century cottage or town house of three storeys with a cellar below. It is built of brown brick with an English garden wall bond with a grey slate roof parallel to the street.

No 29 King Street is a small cottage or town house of a 17th century date but heavily altered in the 20th century. The facade is rendered on the ground floor with false timber framing on the upper floors and a brown brick gable end. Above the door ia a raised shield of doubtful significance dated 1773.

A small quantity of post medieval pottery was recovered during restoration/alterations to No 28-30 King Street in 1976. The buildings are one and half storeys, brick built with a grey slate roof. The works were required in order to renovate the two 17th century cottages, which were then, like much of King Street in very poor condition. The finds included several fragments of 17th-18th century pottery, mainly kitchen ware as well as some clay (smoking) pipe fragments.

No 32-34 King Street consists of a pair of town houses built in the early to mid 18th century but re-fronted in the 1840s. They are of brown brick with a Flemish bond. The roof is grey slate at No 32 and red tile at No 34. There is a brick barrel vault to the rear of the 18th century cellars at No 32.

No 36 King Street is a mid 19th century town house of brown brick in Flemish bond. The house is three storeys with barrel vaulted brick cellar.

King's Buildings is a terrace of 6 town houses, now houses, offices and flats. Dated 1775. Brown brick in Flemish bond to front and west end and in English garden wall bond to east end and rear; roof of grey slates, in diminishing courses to front with very large slates at eaves. In one of these houses lived Miss Frances Wilbraham, a daughter of the late Randal Wilbraham of Rode Hall, who offered her services to nurse the patients of the hospital set up in Grosvenor Park during the 1866 cholera epidemic (see: Pandemic), together with her friend Emily Ayckbowm who was the daughter of the Rector at Holy Trinity Church.