The Guildhall occupies the redundant church of Holy Trinity which closed in 1960. The original building, which had a north aisle, dated from the 14th century. The east end and south side were rebuilt in 1680. This church had a spire which was rebuilt in the 1770s but in 1811 was considered unsafe and taken down. The present church was built between 1865 and 1869 to a design by James Harrison. He died before it was finished, and the church was completed by Kelly and Edwards. Like some other Chester churches, St Bridget's and St Michael's, it is located at the site of one of the gates of Roman Chester and the church buildings may have originally been a re-use of the gate buildings or materials. At the end of 2011 the City Guilds did not renew their lease on the property from the City Council and the management of the "Guildhall" passed to a local company. In 2019 it became "The Guild", a bar.

The church existed by the late 1180s and its dedication suggests an origin in the late 12th century. Soon afterwards its priest was mentioned in terms which suggest that it was associated with St Peter's. Probably it was founded by the Montalt family, barons of Mold (Flints.), with whom early rectors seem to have been connected. The parish lay in the west of the city, extending from the walls of the legionary fortress to the Dee, and thus reaching beyond the medieval city walls to cover the Roodee. It also included the manor of Blacon, beyond the liberties. In 1882 and 1960 the intramural portions and the Roodee were assigned to St. Peter's, leaving Holy Trinity as the parish church for Blacon alone.

Hughes describes it as follows: 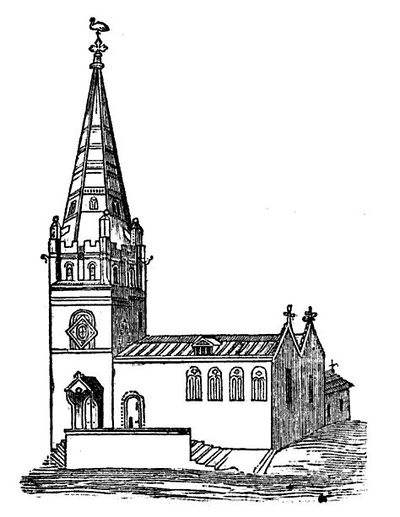 The Guildhall, when still Trinity church, as portrayed with its original spire by Randle Holme.

The summit of the spire did not stay at the Infirmary, it is now at the Countess Of Chester hospital. 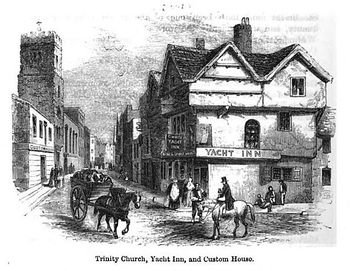 Trinity with a square tower, the Customs House and the Yacht (long since demolished). While visiting Chester Jonathon Swift is said to have scratched "Rotten without and mould'ring within, this place and its clergy are all near akin" on a window of the Yacht with a diamond ring.

The interior fittings of the church were removed when it was made redundant, but Hughes describes them as follows:

While in Chester, Matthew Henry founded the Presbyterian Chapel between Trinity Street and Crook Street (just back up Watergate Street from the Guildhall). He moved again in 1712 to Mare Street, Hackney. Two years later (22 June 1714), he died suddenly of apoplexy at the Queen's Aid House (41 High Street - then the house of the nonconformist minister, Joseph Mottershead) in Nantwich while on a journey from Chester to London. There is no evidence as to a "deathbed conversion" as implied by Hughes. In 1860 an obelisk designed by Thomas Harrison with a bronze medallion by Matthew Noble was erected in Chester to commemorate him. The obelisk originally stood in the churchyard of St Bridget's Church, and was moved in the 1960s to stand on a roundabout opposite the entrance to Chester Castle.

Hemingway gives a little more information about the monuments in the church: