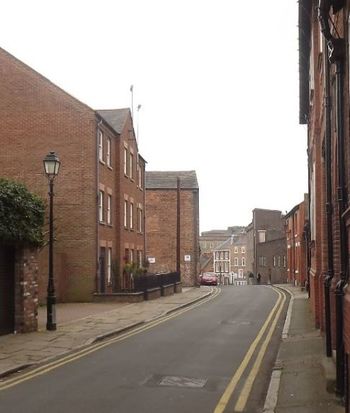 Duke Street looking downhill to Lower Bridge Street in 2018. The warehouse building with bricked up windows and a car parked outside is part of the Records Office.

Duke Street (named around 1875) was previously Clayton Lane, but originally Claverton Lane and probably the site of the eight 11th-century burgages within the city dependent upon Claverton manor. It later included a messuage known in the 1340s as Earl Ranulph's forge. By the late 13th century part of its northern side was occupied by the south front and barn of the town house of Richard the engineer which stood on Lower Bridge Street. Behind the three main frontages of Pepper Street, Lower Bridge Street, and Claverton Lane lay gardens, extending to the walls and still undeveloped in the late 18th century. To the south, however, in the area between Claverton Lane and the river, there had been rather more building, and by the later 14th century a minor thoroughfare known as Capel Lane linked Claverton Lane with the Capelgate. Claverton is now a "lost" medieval village which most probably lay south-west of Heronbridge. It appears in the Doomsday Book of 1086 as one of the richer Cheshire manors, valued at 40 shillings, possessing a salthouse in Northwich worth 12d and two hides (c 240 acres) of arable land.

Duke Street is named after Thomas Duke, a successful wet-glover and land-owner in the area and mayor of Chester 1740/1. He obtained a grant of arms in 1740, and is thus shown as Esq. on his memorial tablet which still survives in the now deconsecrated St Mary on the Hill. Leather work formed one of the largest group of occupations in medieval Chester and many Guilds were associated with the leather trade (Tanners, Skinners, Glovers, Saddlers, Cordwainers). Glove making was for long said to have been one of Chester’s staple industries and survived the destruction of all the glovers houses under the walls of the City in the siege during the Civil War. As shown on the Lavaux Map, the Skinners Company had its own meeting house by the City Walls at the east end of Duke Street. Thomas used his position on the Chester Assembly to get his son Samuel a scholarship to Brasenose College, Oxford. Samuel was then appointed perpetual curate of Guilden Sutton and Chaplain to St John's Hospital.

Duke Street links the end of Park Street with Lower Bridge Street. The slope down from the level of the Rows to street level on Bridge street is quite noticable. It is probably made steeper by the fact that Lower Bridge Street appears to follow a natural gully to reach down to the River Dee rather than take a steeper route such as St Mary's Hill or Souters Lane.

One notable past inhabitant of Clayton Lane was Nathaniel Bassnet, apothecary of Chester. Owing to the acute shortage of small change prevalent in the provinces at the time, Nathaniel issued his own coins or "Trade Tokens" in 1668, examples of which may be seen at the British Museum, London, and the Grosvenor Museum, Chester. The following year he appeared before the Assembly to give his reasons for refusing to pay the fine imposed upon him for refusing to be one of the Common Council of the City - a sometimes time-consuming and expensive business. The Assembly Records state that:

He must have paid up: in 1672 he took on as his latest apprentice Robert Anderson for eight years.

On Thursday August 1, 1672, Charles II demonetized tokens and announced the government would begin making copper small change coins in a proclamation entitled "A Proclamation for making currant His Majestie's Farthings and Half-pence of Copper, and forbidding all others to be used". For centuries the crown had produced and continued to mint silver pennies, but they had never issued coppers. However by the time of Charles II some silver coins had to be very small to ensure that their metal content was not worth more than the face value, they were valuable enough to matter but too easy to lose. A further problem was "clipping". Wealthy people (with savings) became reluctant to hold ‘clipped’ silver coins and strove to acquire gold coin instead – as can be seen by the proliferation of foreign gold coins during the 17th C both in Ireland and in England. In addition to this, anyone importing goods from abroad experienced difficulties when foreign merchants wanted payment in silver – and weighed the coins.

In 1682 Nathaniel Bassnet was fined again for not attending church (St Peter - where he had actually been Churchwarden 1661-2) - indicating he was a Roman Catholic or dissenter towards the end of his life. Under the Act of Toleration separate assemblies of persons for religious worship were permitted and on 2 January, 1694 Nathaniel obtained a licence from the Justices to hold meetings in his house in Clayton Lane. He died in 1698. His son Christopher (1677-1744) was born in Chester and became English Presbyterian minister at Key Street, Liverpool, 1709-44; Bassnet assisted in establishing a school in 1716 for the free education of poor children in Liverpool. His assistant from 1729 was John Breckell, who later became the pastor. Basnett Street in Liverpool, was named after Christopher Basnett. 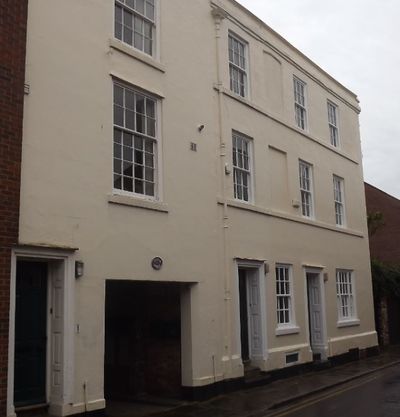 Clayton Court in Duke Street, with quite well preserved door-cases, knock-through access to parking (with exposed fireplace) and a few bricked-up windows to avoid the "window tax".

Town house. c1760 altered and probably divided 1834 (the date on the rainwater head) and altered late C20. Stone-dressed Flemish bond brick rendered to street, with grey slate roof, ridge parallel with front. No.1 Clayton Court, has been much altered. 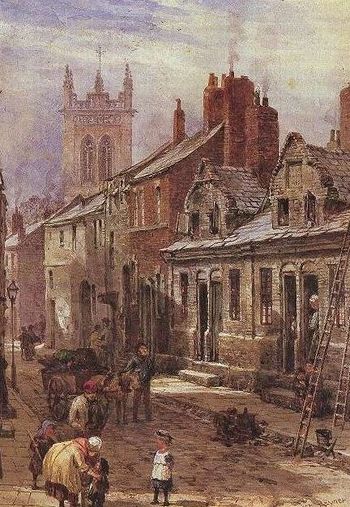 Harvie's almshouses in Duke Street as painted by Louise Rayner. To improve the composition of her water-colour, the tower of St Mary on the Hill has abandoned its distant site and helpfully shambled closer.

A long range of three brick buildings, with the central one being of two stories and the outer ones of a single story on the north side of Duke Street were clearly built as one construction. This is the extension of the Drill Hall as described on the page relating to Volunteer Street. Prior to that it was the site of Harvie's Almshouses.

Harvie's almshouses originated in Robert Harvie's gift to Chester corporation in 1662 of a house in Claverton Lane (later Duke Street) for six almspeople chosen by lot, with a preference for freemen. Harvie (died 1669) was mayor of Chester 1639/40, and was an ironmonger. He also left a share in the Bridgegate waterworks to provide income for repairs and to pay stipends of 40s. a year, with a gown and badge every third year. Any residue after other payments to members of the corporation went to the poor of St. Olave's parish. The corporation exchanged the waterworks share in 1692 for an annuity of £6 payable to the almsmen by the (Old) Chester Waterworks Company, which thereafter ran the charity. From 1692 there was thus no revenue specifically assigned to maintain the almshouses, which were described as 'ruinous' in 1836 and as much dilapidated' in 1850; they were none the less evidently kept in some sort of repair. They were transferred to the Municipal Charities Trustees in 1888. Under a Scheme of 1892 vacancies were left unfilled, the building was sold and later demolished, and the income was diverted to a pension.

The current Cheshire Record Office in Duke Street, Chester, is said to be ‘no longer fit for purpose’. The archive, which is housed in what were once warehouses of the Browns department store, ranges from the middle ages to the present day and includes ‘8km of archives’ from businesses, schools, hospitals and local clubs and organisations. In addition it has tens of thousands of photographs, maps and books covering all aspects of Cheshire’s history. The Local Studies Library is located in Cheshire Record Office and is the major collection of books, pamphlets, printed maps, trade directories and other local studies material relating to Cheshire. Some printed maps and trade directories are available online. A new state-of-the-art history centre could be built on the site previously occupied by Chester Enterprise Centre which burnt down in December 2010.

The houses opposite the former warehouse share some detailing in the brickwork with the warehouse and may also have been built by Brown.