Chester's history has been shaped by water, so has much of the Earth's surface. Tectonic plate movement is driven by the inner heat of the earth but lubricated by water. The planet Mars has too little heat and its water, if not lost, lies frozen as ice beneath the surface. The planet Venus, once a near sister of the earth, is now locked into an eternal runaway greenhouse effect and its water has become steam in a pressure-cooker atmosphere. Without liquid water neither of these close worlds supports continental drift and the ever changing conditions that have promoted the diversity of life on earth. The rocks which underlie Cheshire were formed near the south pole and drift has moved England and Wales northwards. Once a string of volcanic islands known as "Avalonia"; collision with what is now "New England" and "Nova Scotia" added the rocks of what were to become Ireland and Scotland to the British Isles even before the time of the dinosaurs. Changes in sea levels as the drifting continents passed the equator formed coal swamps and warm shallow seas leading to beds of coal and limestone which buried carbon and left it ripe for future exploitation. Later still, the land on which Chester now sits became an arid desert crossed by a Nile-like river where wind-blown dunes and periodic floods left deep beds of sand, later the sandstone of which the City Walls are built. As landlocked seas dried they left their salt behind. Water wore away the later rocks and then water in the form of ice shaped the landscape further. As this ice melted, the floodwater scoured out the Backford Gap leaving a convenient route for a canal and establishing the course of the River Dee. The Cheshire plain was a product of all this movement of rock and ice: and its agriculture well-suited to the production of cheese, which was shipped-out by water, often to supply the navy. 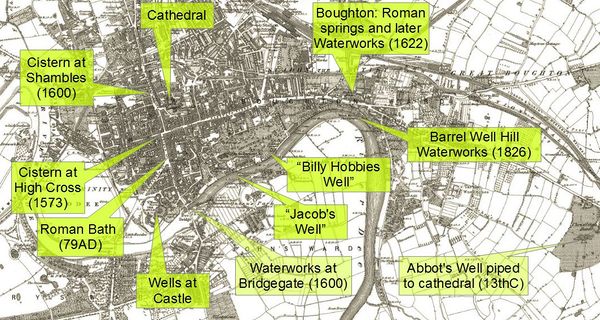 Chester's Water Supply over the years.

The site of Roman Chester had many practical advantages for the Romans. Here was the tidal limit where a ford was practicable and safe. The elevated sandstone ridge on which the City was founded was dry and proof against flooding, but water could be obtained from springs at nearby Boughton and there was a natural anchorage just below the ford. The location sat in the "rain shadow" of Wales.

Water was especially important for the Romans as much of the social life of the legionaries centered around their bath-houses. It has been estimated that the baths at Chester used between 500,000 and 750,000 litres of water a day. Water was piped in large lead pipes underground from a branch off the main aqueduct near the Eastgate, downhill to the baths on Bridge Street. The water was then held in large tanks with concrete foundations, and then fed through the complex. Waste water would have been fed downhill using gravity to the River Dee. The water was fed through 24 hours a day. The water supply of Roman Chester can be dated precisely to A.D. 79 by lead distribution pipes stamped with the consular date and now in the Grosvenor Museum. One specimen which can be seen in the Grosvenor Museum bears a Latin inscription which translated reads:

Julius Agricola was Governor of Britain from A.D. 78-86. He succeeded Sextus Julius Frontinus (c. 40 – 103 AD) who was a prominent Roman civil engineer, author, and politician of the late 1st century AD, and is best known to the post-Classical world as an author of technical treatises, especially De aquaeductu, dealing with the aqueducts of Rome after AD 96. Perhaps it is less than co-incidence that one of Rome's most noted "plumbers" is associated with Chester.

Since the large intramural bathhouse was also dedicated in that year, it would appear that the two were planned together. The aqueduct ran from the springs at Boughton, where, in the AD 90s or later, Legio XX built a shrine with an altar dedicated to the nymphs and wells. Then they named the city "Deva" after a river goddess, and carved an image of "Sulis Minerva" by the river's edge. Years later, Edgar the Pacific would be twice-crowned: first at Bath (Aquae Sulis) and then again at Chester with a row along the River Dee (Deva) from the still extant shrine of Minerva to St Johns (the Baptist).

The Blackfriars secured their own water supply in 1276, after receiving permission to build a pipeline from the spring at Boughton.

Chester's ancient boundaries are defined to the north of the River Dee by the stream which is in part known as "Flookersbrook" and empties into the River Dee after a long and winding journey around the city from the springs at Boughton. About the year 1300 water was taken from a further spring at Christleton known as the 'Abbot's Well' and conveyed by earthenware pipes installed by monks under a patent granted by Edward the First, to cisterns situated at Boughton and in the cloisters of the Monastery (now the Cathedral). In the Middle-Ages, the Dee provided a plentiful source of water throughout the year, but since it lay below most of the town the only way to use it before the 16th century was to draw it out in buckets and fill barrels on water carts. In the year 1600 the Mayor and Citizens, granted to one John Tyrer the right to raise water from the Dee at the Bridgegate, erect a tower upon the Gate, install a cistern, engines or other instruments for raising water and to open streets and lay pipes. Later in 1622, by grant from the Mayor and Citizens of the City, John Tyrer undertook to build waterworks at Boughton.

Waterpower was used for the Dee Mills, located by the Old Dee Bridge and supplied with a head by the weir constructed by the Norman Earl of Chester - Hugh of Avranches. His son, Richard of Avranches, is remembered for two watery things: the grant of a mill at Bache to Chester's Benedictine abbey and his death in the wreck of the "White Ship" in 1120. The White Ship was the Titanic of the Middle Ages, a much praised vessel at the forefront of technology and on its maiden voyage. It was wrecked against a foreseeable natural hazard in the reckless pursuit of speed suggested by an influential passenger, while sailing in the moonless dark. The passengers constituted the cream of high society, thrown into the chilly waters with insufficient lifeboats. 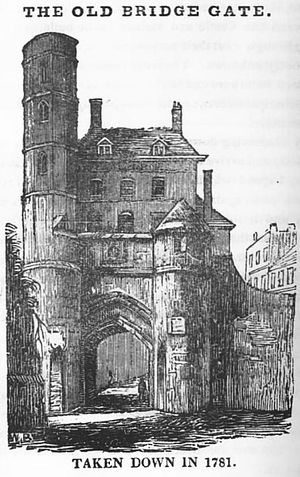 The older Bridgegate - with its waterwoks tower rebuilt after the Civil War.

Between 1323 and 1325, the "Water Tower" and spur wall from Bonewaldesthorne's Tower on the north-west corner of the City Walls were built at a cost of £100 to protect the harbour. The architect was John (de) Helpston who had also designed castles for King Edward II in North Wales. At the time it was known as the New Tower. The Braun and Hogenberg map (1581) clearly shows that at the time the Tower actually stood in the River Dee (at high tide), but the river now flows some distance away.

From being a major port, Chester declined as the River Dee silted up. In 1677 a report by Andrew Yarranton (in his wonderfully entitled book: "England's Improvement by Sea and Land - to out do the Dutch without fighting, to pay debts without money, to set at work all the Poor of England with the growth of their own lands.") stated: 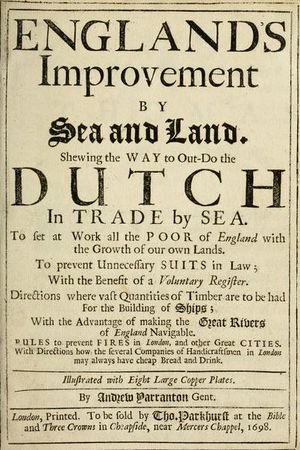 Andrew Yarranton's book on how to "Out-Do the Dutch" related how the "old great city is in danger of being ruined".

Yarranton's book was not taken seriously outside of Chester and was ridiculed as "a pamphlet". Yarranton himself was to die in 1684 (aged 65), and water was to prove to be his undoing. According to antiquarian John Aubrey:

In 1734, a major construction programme began to divert the course of the river. Known as the "New Cut", the diversion redirected the Dee through an artificial channel some 10 miles long from the city towards Connah's Quay, and took the river five miles south of its original course. By the late 18th Century the port further waned, and focus shifted to linking it with the canal network, resulting in the construction of the Dee basin and Tower Wharf. The Chester Canal was dubbed "England's first unsuccessful canal", after its failure to bring heavy industry to Chester.

Another serious blow for the viability of the Port of Chester was the building of what is now the A5 by engineer Thomas Telford from Shrewsbury up to Holyhead: in 1815 when Telford was appointed to the new road project it was seen as a threat to Chester's Irish sea-trade which had to pass over the narrow Old Dee Bridge. As a consequence a committee was set up which led to the construction of the Grosvenor Bridge over the River Dee in Chester, which was completed in 1833. The Grosvenor Bridge was a spectacular engineering triumph, being the largest single span stone bridge in the world at the time. It's huge size was required so that sailing ships could pass beneath it - even though there was less than a half mile of water upstream below the weir, and the vast majority what docks Chester actually had were downstream of the new bridge. The railway bridge built just a few years later downstream of the Grosvenor Bridge shows how much river traffic had declined as it is too low for large ships to pass.

The "New Cut" briefly re-vitalised Chester as a Port, but in the 1770's a canal was needed to expand the Port's hinterland. Originally intended to go to Middlewich, this route was blocked by the Trent and Mersey Canal Company and the Chester Canal became an unsuccessf "dead-end" leading to Nantwich. In the 1790's, the proposed Ellesmere-Mersey canal was planned to link Shrewsbury with Liverpool; its route being down the Wirral to Chester, on to Wrexham and Ruabon and then on through Chirk towards Shrewsbury. The northern section of that canal joined the Chester Canal near its connection with the Riven Dee at Chester. Building Thomas Telford's 1000 foot long Pontcysyllte Aqueduct in 1805 almost ruined the Ellesmere Canal company leaving them with a 17-mile gap between Chester and Ruabon and no money. The Chester Canal was now brought back from dereliction as the central secion of the Ellesmere canal forming much of what was to become the Shropshire Union Canal.

Information about Chester's water-supply and it's use, whether simple springs and wells or something more complicated, is rather scattered through the Wiki. Some references include: