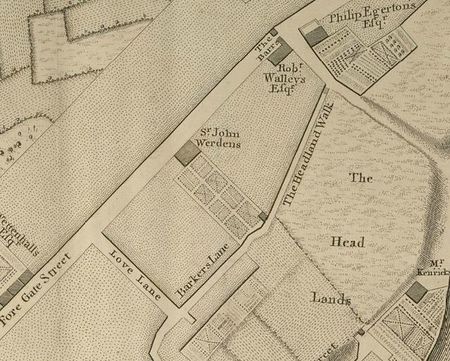 The area around Barker's Lane (now Union Street) from the Lavaux Map (1745).

Known as Union Street by 1816, this was formerly "Barker's Lane" a continuation of Vicars Lane whose early name records the presence of tanners in the area. A fact confirmed by pre-Bath Street maps which show the presence of "Tanyard Court" directly off Union Street.

A "Barker" was a person who stripped "tanbark" from trees to supply bark mills. Tanbark is the bark of certain species of tree, especially oak. It is traditionally used for tanning hides into leather - once a major industry in Chester. Notably, this is the part of Chester closest to the Forests of Mara and Mondrem, adjacent medieval forests in Cheshire, which in the 11th century extended to over 60 square miles and were a predominantly oak-mixed woodland. The modern Delamere Forest is the remnant of the medieval forests, but little ancient woodland survives. Trades concerned with leather were important in Chester in the Middle Ages and the tanners probably existed as an organised body in 1361, when they offered the Black Prince twenty marks (£13 6s 8d) and a perpetual annual payment of 6s 8d for letters patent forbidding others to meddle with this craft. This Charter, granted in 1362, was rescinded in 1370. In the list of companies in a Mayor’s book for 1475-76 they appear under the alternative name of barkers. In February 1711, they corresponded with Chester’s member of parliament (Peter Shakerley) over the tax on leather and, notably, the export of oak bark to Ireland.

Union Street may take its name from The Acts of Union 1800 (sometimes erroneously referred to as a single Act of Union 1801) which were parallel acts of the Parliament of Great Britain and the Parliament of Ireland which united the Kingdom of Great Britain and the Kingdom of Ireland (previously in personal union) to create the United Kingdom of Great Britain and Ireland. The are other Irish connections with Union Street. At its far end is St Werbugh's RC Church in Grosvenor Park Road. Noted Irish politician, Daniel O'Connell M.P., lay in state in the original St Werburgh, Queen Street. O'Connell had died in Genoa, but after his death was taken back to Ireland, being lain in state several times on his last journey. The Act of Union was in part inspired by French attempts to land troops in Ireland during the Napoleonic Wars, although the historical context was made more complex by activities on both the Irish and the English side. 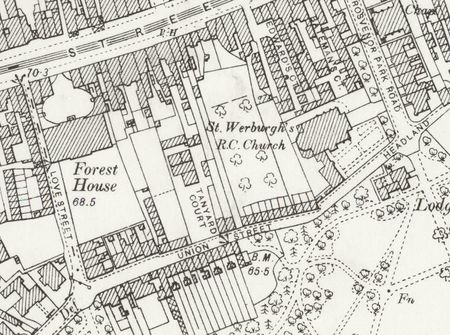 The area around Barker's Lane, which had become Union Street, prior to the constuction of Bath Street. Note the "Tanyard Court" north of Union Street - another indication of the local leather industry. To the northeast is an extensive area of slum courts: as with those of the city centre, they developed on the sites of disused stabling behind coaching inns following the arrival of the railways.

The "Union Hall" stood on the south side of Foregate Street. It was erected in 1809, opened in July of that year, and contained sixty single and ten double shops, exclusive of an immense warehouse in the upper floor. It was built by local builder and iron-founder Thomas Lunt, who raised a subscription to fund it and was chiefly used for the wholesale selling of Manchester and Yorkshire cloths. Lunt also built the Union Bridge (c. 1820). It was quadrangular in shape, with three stories of lock-up shops or store rooms. Having the appearance of an old inn yard, it was, if anything, more patronized than the other Commercial Halls, and continued to be closely associated with the horse fairs, held at its front entrance (see the painting by Louise Rayner - no doubt many of those present would have been Irish). In olden times it was customary to sound a bugle on the Northgate at the opening of the October fair, it was later moved to the Cattle Market in George Street, in 1884. Merchants paid further subscriptions to sell their wares, but were not allowed to sell eleswhere or at times other than the annual fairs. Similar arrangements existed for those who sold goods at the Commercial Hall on the north side of Foregate Street and at the Linen Hall - it was very much the last of the monopolies which the Chester guilds tried to preserve under their ancient Charters.

Pigot writes of the Union Hall: 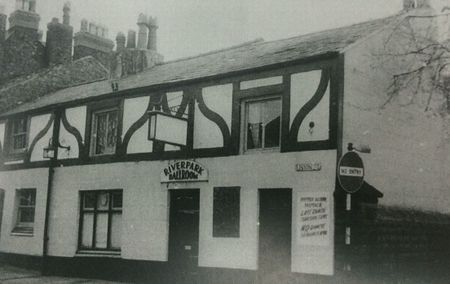 The Riverside Ballroom (previously the Union Arms) was an early Beatles venue.

There was a pub on Barker's Lane called The King's Arms, the same as the King's Arms on Union Steet. In 1828 it changed it's name to The Union Arms before reverting back to The King's Arms in 1850. After closing, the inn was extensively enlarged towards the rear and became the Grosvenor Skating Rink. In 1863, the American inventor James Leonard Plimpton patented a four-wheeled roller skate that was capable of turning. Skates had already been around for about 100 years, but were cumbersome because steering meant having to stop and pick up one's feet. Plimpton's innovation meant skaters could move easily in a circle. By the mid-1870s, a craze for indoor rollerskating had come to Britain, with 50 rinks in place in London at one point. Roller-skating seems to have been the first craze actually to be called a ‘craze’ at the time. The press dubbed the phenomenon "rinkomania", but the healthy exercise that Plimpton had boasted of was not all that attracted the young "rinkers". Australia's Port Macquarie News reported, of goings-on in London and elsewhere:

The skating rink later became The Broadway Dancing Academy Ballroom, nicknamed 'The Ack', a favourite haunt of American servicemen stationed around Chester during WW2. In the 1950s, the Ack was renamed The Riverpark Ballroom. The Beatles played here on four consecutive Thursdays in 1962: 16th, 23rd (John Lennon's Wedding Day), 30th August and 13th September. The Riverpark Ballroom closed the following year, 1963, and was demolished, together with adjoining buildings, as part of road-widening for the incorporation of Union Street into the Inner Ring Road.

In 1830 the fairs were still 'great marts for the sale of various sorts of goods'. They were inaugurated by a horse and cattle fair, at which great quantities of leather were also sold. Thereafter fustians, printed cottons, and muslins from Lancashire, hardware from Sheffield and Birmingham, flannels from Wales, and woollens from Yorkshire were marketed in the halls. By then the emphasis had shifted away from wholesaling to shopkeepers from Cheshire and north Wales in the opening days of the fair, and towards more general retailing in the last week. By the early 1850s wholesaling fairs in the purpose-built halls were largely extinct, since railways now allowed retailers from Chester and elsewhere to travel to the manufacturing districts and deal with their suppliers at source. The Union Hall remained in use as shops and warehousing for Yorkshire clothiers until after 1850. It was still intact in 1911, but shortly thereafter the street frontage and part of the south range were demolished. The western wing had been destroyed by 1966, and in 1992 the remaining buildings were pulled down.