The Elliotts were one of the great border clans, also known as "reivers". The reivers were such a problem throughout the Borders that even the church became involved in their bloody wrangles. In 1525 they had become such a nuisance that the then Archbishop of Glasgow, Gavin Dunbar, put a curse upon all the reivers of the borderlands (and in particular upon the Elliotts). The curse was apparently at the behest of Cardinal Thomas Wolsey and Dr. Thomas Magnus. 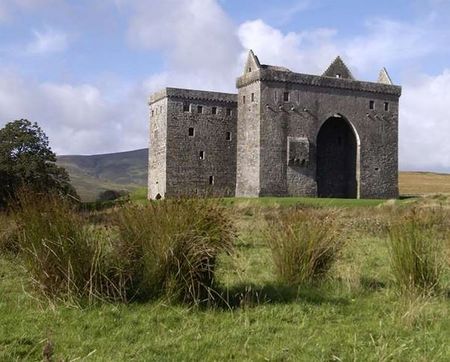 Hermitage Castle is still an impressive ruin. The castle has a reputation, both from its history and its appearance, as one of the most sinister and atmospheric castles in Scotland.

The final lines of the "curse" bear some passing similarity to the Bell, book, and candle method of excommunication by anathema, introduced by Pope Zachary around the middle of the 8th century. This can be avoided by the "Dove and Mirror" technique discussed in Blish.

The Elliott's are not, in any known way, related to the ancestry-obsessed Cheshire gentry, but do turn up in interesting bits of history. Wee Jock ("No Lugs") Elliott, who had presumably lost his ears for some crime famously stabbed James Hepburn, and his words have been suggested as the origin of the term "Nemo me impune lacessit". At least one branch of the Elliot clan - the Eliots of Cornwall - is reputedly descended from a Breton or Norman knight named William de Aliot, who shot the arrow into the eye of Harold Godwinsson. Harold is said by some to have survived and taken up residence in the Hermitage at Chester - as well as later haunting the area around St Johns.

The curse has never been "lifted". It is one of the few instances of a "transmissible excommunication" which can be passed on down the generations and even to others having any dealing with those it relates to. Much of their genealogy was lost or scrambled when they were forced to resettle in Ulster. There is even a rumor that the name "Elliott" was generically applied to many of these emigrants because of its sheer notoriety, whether they were really "Elliotts" or not (rather like "Hooligan"). The curse and the scrambled ancestry gave rise to a poem which exists in several variants:

The fictional Elliott's turned up in the US. In 1946, cartoonist Charles Addams met science fiction writer Ray Bradbury after drawing an illustration for Bradbury's short story "Homecoming" in Mademoiselle magazine, the first in a series of tales chronicling a family of Illinois monsters, the Elliotts. Bradbury and Addams became friends and planned to collaborate on a book of the Elliott Family's complete history, with Bradbury writing and Addams providing the illustrations; but it never materialized. Bradbury's Elliott Family stories were anthologized in "From the Dust Returned" (2001), with a connecting narrative, an explanation of his work with Addams, and Addams's 1946 Mademoiselle illustration used for the book's cover jacket. Although Addams's own characters were well established by the time of their initial encounter, in a 2001 interview, Bradbury states that Addams "went his way and created the Addams Family and I went my own way and created my family in this book."

It's unlikely that Bradbury had ever heard of the Elliott's, but he just might have. An early Victorian guidebook records the following lines:

The present writer has few pretensions to being diabolical in any way, but is possibly the source of an interesting story about bar-codes. Back in the 80's he was waylaid in a Dutch "cafe" by a gentleman of rather strong religious beliefs who tried to convince him the "end was nigh" - He retorted by saying it had happened already and the envangelist must have missed it (not being numbered among the relatively small elect), and that he could prove it. This evangelist was instructed to find something with a bar code on it and work out what the first, middle and last three bold bars (the slightly longer ones) were meant to be as numbers. Of all things he chose a box of matches (known as "Lucifers" in the Dutch language). It took the evangelist a while to work out they were 6, 6 and 6 (two thin bars) and then turn a whiter shade of pale (which happened to be playing at the time) before he left. Evidently he believed that after the elect were saved the doomed rest would only be able to deal in goods marked with the "number of the beast" - DCLXVI - and was a little shocked to discover this was already the case.