Anyone walking down Abbey Street might think they were walking on medieval "river-bed" cobbles. Actually, the cobble-stones were laid during restoration work in 1980 following the Historic Towns Report "Chester: a study in Conservation", published by Sir Donald Insall in 1968. 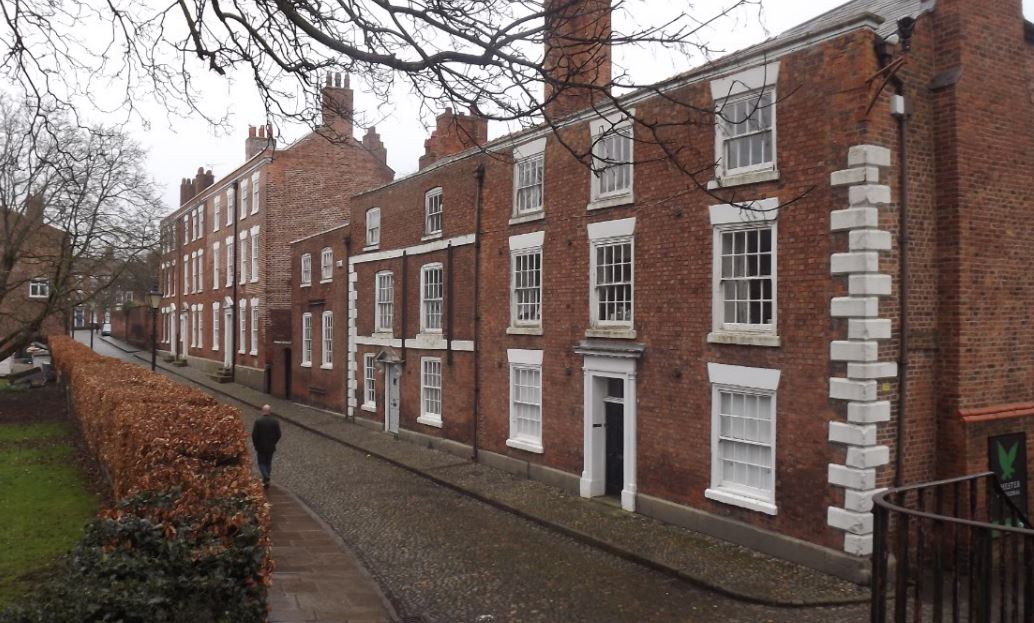 Looking up Abbey Street from The City Walls.

The Bishops House was originally the Deanery. Probably dating to mid C18, it has been added to and altered. It is built in Flemish bond brown brick with a Westmorland green slate roof.

Abbey Chambers is a detached town house, from 1754. Built on a probably 40-year lease from the Dean and Chapter of Chester Cathedral. A fragment of a probably pre C18 wall of coursed rubble sandstone is attached to the rear. In the early 19th century when the gaol yard was added, it necessitated the demolition of the section of the wall that included the Shipgate. It was taken down on April 12th 1831. Each stone was numbered and the Shipgate moved to the garden of Mr John Finchett-Maddock, the Town Clerk (1817-57), at "Abbey Chambers". Finchett-Maddock was also MP for Chester. However, the Shipgate was not to stay put. In May 1893 another Finchett-Maddock gave it to the Chester Archaeological Society and it was for a while hoped that it could be moved back to its original location. This proved impractical and the Shipgate was re-errected by the Corporation in August 1897 in the Groves, and finally, moved in 1923 to the southwestern corner of Grosvenor Park where it still stands today.

Nos 4-10 are a row of 4 small town houses. 1826-8. For Mr Thomas of King Street, Chester as sub-lessor of the prebendal land of Rev. James Thomas Law. Flemish bond brown brick with grey slate roof. Prebendary J. T. Law, resident at Nos 1 and 2 Abbey Square, engineered this development on land previously occupied by his stables, to the displeasure of the Dean and the majority of Chapter.

Nos. 5-9 are a terrace of 3 town houses. Nos 5 & 7 are dated 1764 on the top butterfly bracket. The houses were built by leaseholders from the Dean and Chapter of Chester Cathedral. The houses were renovated 1979-80.

No. 15 is a town house altered and added to early and late C18, by leaseholder from Dean and Chapter of Chester Cathedral. The east side has a Gothick-arched fixed light with 'intersecting tracery' glazing bars to second storey. In 1945 the Firs School first opened by Florence Longman, a New Zealander, in a small room in 15 Abbey Street, later moving to other premises.

Chester Cathedral's falconry center opened in July 2015 and is exceptionally good value for money - for about the price of a pint you can meet the dozen different bird species close-up (two eagle, five falcon, two owl, two "hawk", one somewhat comic vulture) and watch them being fed and exercised in the open air - and even have most of them sit on your wrist. The staff are very knowledgeable about the birds and bird breeding (some of the birds are specially bred inter-species hybrids for the location). While there is a small refreshment kiosk you can also take your own picnic. Many of the birds are exercised and fed in the field next to the City Walls.

The New Song School building of the Cathedral is best seen from Abbey Street. The project comprised the construction of new accommodation at first and second floor levels above the existing ground floor rooms, on the site of the old Monk’s Dormitory. Access is via a new lift and stair tower. The external walls are in red sandstone from the Locharbriggs Quarry in Dumfries and the roof is covered in Heather Blue natural slates from the Penrhyn Quarry in Bethesda, both to match the surrounding cathedral buildings.

In February 1969, nine of the ten bells in the central tower were removed to be recast by John Taylor & Co as a ring of twelve bells with a flat sixth. The new bells were cast in 1973 and work on the new bell-tower began in the same year. Two old bells dating from 1606 and 1626 were left in the tower. On 26 February 1975 the new bells were rung for the first time, the official opening was on 25 June 1975. A now almost unique feature of the bell-tower is that the soffits above the door and windows are made of "lead coated steel" an innovation put into production at Chester's Leadworks. This was for cladding of buildings with rust free external panels and was a fore-runner to the cheaper plastics/aluminium panels which were used more recently (to disasterous effect due to flammability). The panels are manufactured by rolling together pre-treated steel sheet and lead sheet with sufficient force to ensure cohesion without the need for adhesive. The sandstone base of the tower is also of local origin while the slates are from Bethesda in North Wales.

The Saddlers and Curriers company originally had their own meeting place, the Saddler’s Tower on the city walls near the east end of Abbey Street. This is believed to have been a square watch tower, shown on a map of 1745, which stood (according to some) c. 50 m. north of the Kaleyards Gate and was aligned with the medieval defences, which stood 1.5 m. inside the Roman ones, the tower was built at a point where the Roman walls had collapsed or had been "robbed-out".

The Saddlers' company occupied their tower in the mid 16th century, and was still their meeting house in the later 17th. In 1690 it was repaired and said to be 241 years old. The tower was taken down to the level of the walls in 1779–80 and demolished in 1828. It's location is said to be presently marked by buttress-like structures representing the stubs of its north and south walls. 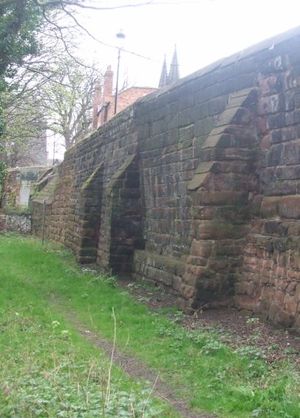 The outside of the walls just after the Kaleyard gate. The further pair of abutments correspond to the location of the Sadlers Tower according to some sources. However a better location is by the cottage in the distance.

He adds as a note: 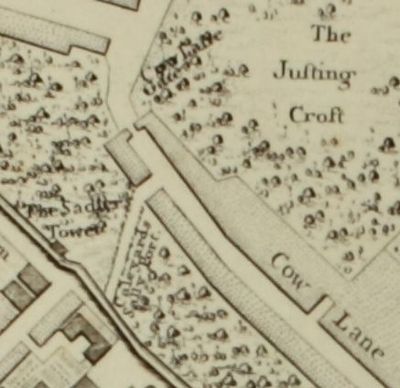 The location of Sadler's Tower. Cow Lane Gate, a single tall archway spanning the street, was built in 1630 and taken down in 1773

John Seacome's Chester Guide, published shortly after 1828, tells us that, starting from the Kaleyard Gate:

While not set in stone the location of the Sadler's Tower seems to have been quite close to the Kaleyard gate. Notably the historical records for July 1828 state that as a consequebce of a rainstorm a section of the City Walls near the site of Sadler's Tower collapses "with a terrible crash, the earth having been completely excavated and washed away by the descending torrents". One wonders if the collapse was in any way connected with Griflith Rowlauds.