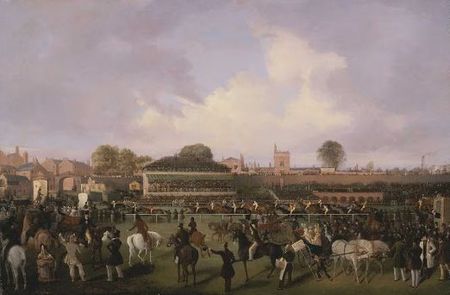 William Tasker's "Cardinal Puff" winning the Chester Tradesmen's Cup in 1839. The Watergate can be seen in the background. The horse was owned by "Lord Westminster" and shares its name with an Army drinking game that was featured in "Dad's Army", but according to "Notes and Queries" (1863) dates back much further.

William Tasker (1808-1852) was born in London, the eldest son of Charles Moulson Tasker a journeyman cabinet maker and Sarah his wife. His family were poor and his father had tramped from Chester to London to seek work. William was born (16th April 1808) in (or near) Golden Square in the Soho neighbourhood of the City of Westminster. The family moved back to Chester about 1818 and at the age of ten he attended the Bluecoat Charity School where he remained until 1822. He studied drawing under Robert Morris. On leaving school he worked for a painter and decorator and soon moved to Leeds to learn the trade of lithographer with the firm of Masser Bros. Due to ill health he was forced to return to Chester where he set himself up as an artist. While in Chester he was appointed art teacher to the children of Squire Richard Congreve of Burton Manor on the Wirral.

The Congreve family has been associated with Burton since the mid 1700 when they invested much time and money to ensure that Burton became a lucrative investment for the family. Richard Congreve was the founder and builder of Burton Hall who died aged 80 years in 1857. The hall stayed in the Congreve family until 1902 when Walter Norris Congreve sold Burton Hall to Henry Nevile Gladstone (the son of William Ewart Gladstone) for £80,000. The Gladstones played a huge role in the development of the Manor but at the time of purchase the family had already achieved notoriety through large amounts of property, lucrative overseas trading and (under Sir John Gladstone, 1st Baronet) slave trade in the Caribbean. The proof of this can still be seen in the coat of arms over the door of the Manor which clearly depicts the severed head of a black man in the herald. The extent of Sir John's ownership of slaves was such that after slavery was abolished in 1833, he received the largest of all compensation payments made by the Slave Compensation Commission (over £80 million in present money).

One of his first important patrons was Robert Grosvenor, 1st Marquess of Westminster, for whom he painted a number of racehorses including Decoy in 1832 (exhibited at the old Liverpool Academy, then in Post Office Place off Church Street). Tasker succeeded a Mr. Edwards as art master at the Mechanic’s Institute, St. John Street, in 1842. In the annual report for the year 1842-3 his salary is stated to be £10 per annum. He was still officiating there in 1847. At this time he resided with his father in Queen Street. In around 1842 he was also appointed art teacher to the children of Squire Richard Congreve of Burton Manor on the Wirral. This probably accounts for the subject of his exhibit at the Liverpool Academy in 1845, entitled "Burton Marsh on the River Dee". It was here that Tasker met Miss Jones, of Northop, at that time governess to the Misses Congreve, whom he eventually married. From 1836 to 1846 he painted pictures of most of the old houses, and street scenes, in Chester and the surrounding districts. He continued to exhibit at Liverpool until 1851. He died at Chester, 1st September, 1852, in his 45th year, and was buried in the general cemetery.

The majority of Tasker's equestrian work was racehorse portraiture and racing scenes. Mitchell notes that the present work was one of his best examples,

In 1850, a commentator Robert Colton wrote about Chester racecourse and the atmosphere of a race-meeting there:

A year prior to this "Puff", Francis Calcraft Turner had also depicted Cardinal Puff in a work that was commissioned by the 1st Marquess of Westminster to celebrate the victory of his horse "Cardinal Puff, with Sam Darling up", in a field of eighteen runners. The distance was twice round Chester's small oval course "starting at the Castle-pole and ending at the Coming in chair". Entitled "Cardinal Puff Winning the Tradesman's Plate at Chester Races, 1839", it was sold by the Executors of Anne, Duchess of Westminster at Christie's, Woburn Abbey, 21 September 2004, lot 1020. R.M. Bevan had used that image as the jacket cover for his book "The Roodee: 450 Years of Racing in Chester", published in 1989.