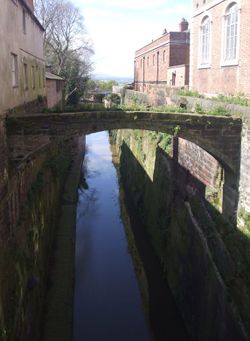 The "Bridge of Sighs" spans the cutting containing the canal which he invested in and which he may also have surveyed and engineered.

Joseph Turner (c. 1729–1807) was an architect and canal engineer of Welsh origin who worked in the 18th century. Most of his major works were in North Wales and in Chester. Almost all of them were in Georgian style. Turner also designed memorials in Chester Cathedral, and appears to have been a member of the Chester Assembly. A major focus of his activity is that part of Chester around the Watergate. It is possible that Turner the Chester architect and Turner the Chester canal engineer are two separate but contemporaneous people.

Knowing exactly what Turner designed is complicated by the fact that he comes of from a family of architects of whom several (including his father) were named Joeseph. Thus, while in 1756 a Mr Turner, Architect, was known to have come from Whitchurch to Chester to survey the Exchange, this may or may not be the same Joseph Turner. The Exchange, which had already been strengthened by the addition of 'several strong pillars', was showing signs of collapse. It was secured by enclosing the ground floor to house the row of shops, on which work continued until 1759. 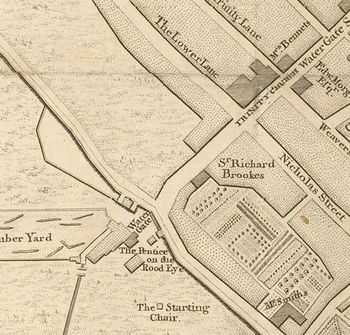 The Lavaux Map of 1745 shows the area around the Watergate to be only partly developed at that time. Many of the documents which refer to Turner also refer to locations in this part of Chester.

The Eastgate, constructed in 1768-9 provides something of a puzzle, as the Chester Assembly minutes leave some doubt as to the actual architect. The Corporation demolished the old gatehouse and were to have financed the new arch. The Assembly first employed a "Mr Turner of Hawarden" to prepare plans and estimates. The relevant entries in the Assembly minutes are:

The existence of a "Chester mason" living in Hawarden is independently confirmed in the records of the Yorke's of Erddig from the early 1770's, but confusingly other writers identify this Turner as hailing from Whitchurch. In any event, in 1774 Turner was recorded to have been formally admitted as a Freeman of Chester.

Around 1779 he designed a part of "Watergate flags". The development was criticised by Broster for the wanton destruction of remains of Roman Chester which were uncovered during building work. At this time the area around Stanley place and the Watergate was being heavilly develloped and it is possible that Turner was involved with much of that development. At this time, possibly from 1780, he was living around Paradise Row, just outside of the old Watergate and both court and other records from that time show that he was involved with property and land purchase in that area (ZA/B/5/f.8v [p.16] 31 May 1787, ). Indeed, by 1780 he had designed Numbers #10–28 Nicholas Street known as "Pill Box Terrace" due to it being a popular location for medical doctors. During the 1780’s, Turner was also employed to design a terrace of houses in the Blackfriars area, possibly including Soughton House (2 Nicholas Street Mews) - . 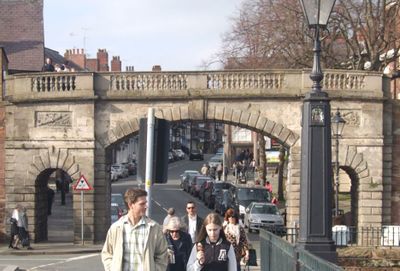 In 1781 Turner designed the first of his two City gates - the Bridgegate, which was constructed in 1782. Hanshall notes:

In 1782, during the mayorality of Thomas Patton, a Joseph Turner was co-sherrif (together with Samuel Bromfield). It is not known for certain that this was the same Turner, but it seems likely. The same is true of his election as an Alderman on the 21 October 1794 (ZA/B/5/f.39v, [p.78]) - most mentions of Alderman Turner relate to the area around the Watergate which might be considered his "patch".

His next major work was the new Watergate. At the time of its purchase by the corporation from the Earl of Derby in 1788, The Watergate was considered so "dangerously ruinous" that it had to be immediately demolished and the present arch, designed by Joseph Turner, was erected the following year. The Assembly minutes record the contract on 23 May 1788 (ZA/B/5/f.11, [p.21]), and payment on 29 March 1790.

Pigot, writing in 1815, describes the Watergate as follows:

In 1791 Joseph Turner, now identified in various sources as either "a Chester architect" or a "Whitchurch Engineer" (Canal Ports, John Porteous), put forward a scheme for the course of the Ellesmere/Whitchurch Canal routed to the east of the Dee, with Whitchurch being served by a heavily-locked branch about 10 miles long, up the Wych Valley from a junction near Threapwood. 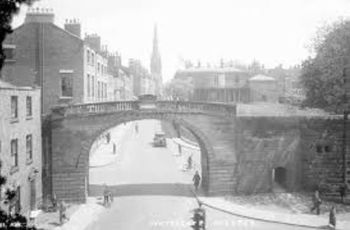 The Watergate as designed by Turner. Behind the gate on the left is some of the extensive development of the area around Stanley Square which Turner appears to have been involved with.

In 1793 Turner was to be paid "£20 on erecting a stone arch over the canal from the Northgate garden to the Blue Coat Hospital" (ZA/B/5/f.36v, [p.72] 30 July 1793). This became known as the Bridge of Sighs. He by now appears to have some role in local government as he is involved in the consideration of a "Petition from John Bramwell for a lease of land, to compensate for land recovered from him by River Company" (ZA/B/5/f.43, [p.85] 13 February 1795). Similarly on the 23rd July 1795 the assembly minutes record: 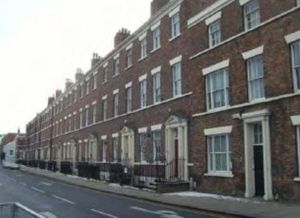 The Georgian terrace in Nicholas Street known as "Pill Box Terrace" - Turner designed a part of this.

"Joseph Turner Architect" was named as a shareholder in the 1796 Act which enabled the purchase of the mortgage of the Chester Canal for £8000 from William Egerton (heir of Samuel Egerton). (it was valued at £15,0176 19s and 7d). Turner was engineer for the Chester Canal until 1797, when he was succeeded by John Fletcher. While the Corporation was strongly in favour of the intended canal to Nantwich and beyond, it was a heavy investor through the Owen Jones charity in the company's shares, thus risking the funds of the charity rather than its own.

Around this time Turner may have moved into Nicholas street, for the Assembly records a:

Circa 1807 he was architect for the then "new" City Jail (see the 1825 Map), which was constructed on his "patch" just to the west of the Watergate. The jail was subsequently demolished and replaced by the Queens School building (designed by Ould) when the even newer jail was built, at Chester Castle, to a design of Harrison. 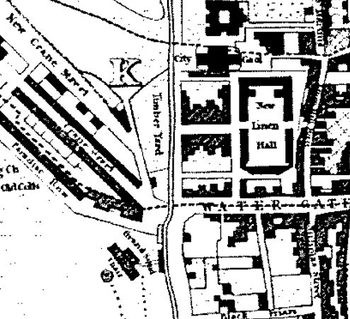 This 1825 map shows the area around the Watergate to be significantly more developed at that time. Many of the documents which refer to Turner also refer to locations in this part of Chester. 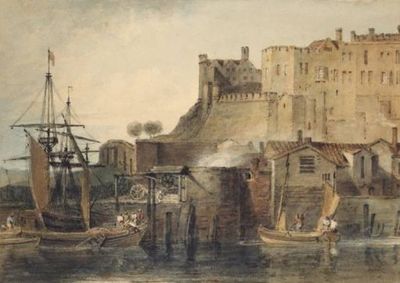 Chester Castle by Joseph Mallord William Turner (c1810). This shows the south end of the Inner Bailey of Chester Castle and a part of the Judge's Lodging, with the Skinner's Houses below. The octagonal tower may be "Damory's Tower".

J.M.W. Turner was an English Romanticist widely considered one of the most innovative landscape painters of the 19th century. Radiating light from a particular source, Turner created tunnel-like luminosity within each painting. He is often credited for elevating landscape painting to a status it had not yet achieved in England. Like his contemporary John Constable, he made spontaneous watercolors and oil studies of fleeting weather phenomena, such as rainbows, storms, and volcanic ash. He once explained:

He was born Joseph Mallord William Turner on April 23, 1775 in Maiden Lane, Covent Garden, London. Turner's mother showed signs of mental disturbance from 1785 and was admitted to St Luke's Hospital for Lunatics in Old Street in 1799 and was moved in 1800 to Bethlem Hospital (better known as "Bedlam"). He was admitted to the Royal Academy of Art in 1789 at an early age. He lived in London all his life, retaining his Cockney accent and assiduously avoiding the trappings of success and fame. During the 1790s, Turner offset his living expenses by creating watercolor and etching reproductions for topographical books on landscapes. One of these early works shows a view of the city of Chester from across the River Dee with the brickfields of Hough Green in the foreground. By the 1800s, he had been inducted into the Royal Academy, while his work had adopted the golden tones of Claude Lorrain and Nicolas Poussin.

He opened his own gallery in 1804 and became professor of perspective at the academy in 1807, where he lectured until 1828, although he was viewed as profoundly inarticulate. Embarking on a tour of Europe during the 1810s, he filled his sketchbooks with studies of ruins and spectacular sunsets. He did not marry, but fathered two daughters, Eveline (1801–1874) and Georgiana (1811–1843), by his housekeeper Sarah Danby (1760–1861). He became more pessimistic and morose as he got older, especially after the death of his father, after which his outlook deteriorated, his gallery fell into disrepair and neglect, and his art intensified. In 1841 Turner rowed a boat into the Thames so he could not be counted as being present at any property during that year's census. During the latter decades of his career he led an eccentric and secretive lifestyle, about which few of his peers knew: in fact he had taken a house at Chelsea where he lived with Sophia Caroline Booth (a former landlady) as "Mr Booth".

Turner disappeared from sight and lived in squalor and poor health from 1845, and died of Cholera on December 19, 1851 in London, having been found by his friends just a day before his death. He left behind more than 550 oil paintings, 2,000 watercolours, and 30,000 works on paper. 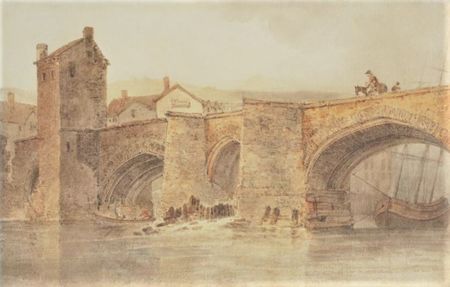 Attributed to Turner, this is supposed to be the Old Dee Bridge around 1794. There are certainly many features which are very similar to the bridge - such as the shape and relative widths of the arches and the dimensions of the cutwaters, but, if it is a Turner then he has taken some licence. Contemporaneous maps do not show the mill-like building in the background to the right, and the positioning of the windows on the tower (used for the collection of tolls) do not agree with those of an illustration by Heath/Pickering made at roughly the same time (although the chimneys are accurate). In the background, it is possible to see what appear to be hills, but none are visible from this perspective. The bridge was widened, upstream, by Thomas Harrison in 1826, to provide a footway, partly corbelled.

Some of Turner's work related to Chester can be identified as being of a specific location, but other works are very difficult to locate, as he appears to take inspiration from structures rather than depict them with complete accuracy, as well as placing other buildings in the background that would not in fact be visible based on modern day knowledge. This may be because some of his sketches could have been intended for teaching purposes rather than as "life" drawings. Some examples of his work on Chester are linked to below.

His illustration of "Chester Bridge" shown right is inscribed by the artist "W Turner/Shave for a penny". His father, William, was a barber and when Joseph was young his early works were sold in his father's shop for one or more shillings apiece.