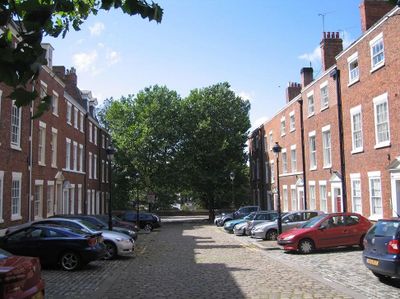 During the 1770s Stanley Place and Stanley Street were developed. At the time of this sale the entire area was known as the Grey Friar's Close or, alternatively, as the Yacht Field. Stanley Place provides a virtually intact and complete example of a Georgian street of townhouses. One of these was once a nursing home during WW2. The first baby born in Chester on VE Day was a son for Mrs. Hodgson, Holly Cottage, Christleton, who arrived at 2.15am in the Chester Nursing home, Stanley Place.

Stanley place was not always as prosperous as it is now. The city's worst slums lay at its heart, just behind Town Hall Square. Little was done to remedy serious overcrowding there until the 1930s, when the city started to move slum dwellers to less visible housing estates in the suburbs. People from the clearance areas who could not afford council-house rents moved into formerly respectable neighbourhoods, where single rooms were sublet to whole families, so creating new areas of overcrowding. The results were evident in a complaint of 1937 that people in Watergate Street, Crane Street, Stanley Place, and Paradise Row stood in doorways with shawls over their heads, their children screaming, rolling iron hoops, and kicking footballs in the streets, or sitting in doorways.

Until his death Admiral Thomas Leeke (Leche) Massie (20 October 1802 – 20 July 1898) lived at #3 and at the time was "the oldest known sailor of whom any record could be found", and hence generally known as "the father of the British Navy". He was born at Coddington Hall, Cheshire, and entered the navy in October 1818 as a midshipman on board HMS Rochfort, flagship in the Mediterranean of Sir Thomas Francis Fremantle (20 November 1765 – 19 December 1819: a good friend of Nelson), and later of Sir Graham Moore. Massie helped to smash the Turkish- Egyptian fleet at the battle of Navarino 1827 during the Greek War of Independence. He was a member of the boat's crew sent ashore with the object of removing Lord Byron during his last illness. On the commencement of the Crimean War Massie was appointed to the command of Powerful which formed part of the Baltic fleet. Made Rear Admiral in 1860 and Rear Admiral in 1866 and Admiral 1872. He had the medal with two clasps for Navarino and Syria, the gold medal for the capture of St Jean d'Acre and the medal for operations in Burma.