St. Werburgh Street which leads from Eastgate Street to Chester Cathedral,was converted after 1845 from a "narrow and incommodious" street, "occupied principally by deformed masses of unseemly buildings", into a fitting approach to the cathedral. Its improvement began with the demolition of the old linen hall, by then dilapidated and used for warehousing and workshops. Between 1867 and 1874 the dean and chapter and their lessee completely redeveloped the property opposite the cathedral, while the entrance from Northgate Street was enlarged by demolition on the south side and setting back the frontage of the new King's school building of 1876 on the north side.

Eastgate Street in 2015 with the High Cross on the far left and Eastgate to the right. The Cathedral is visible up St Werburgh's Street. The whole scene here is a collage of architectural styles and influences upon which much might be lost to the casual visitor.

In the 1890s, the Chester City Council decided to widen St Werburgh Street, and arranged for the demolition of a row of old shops on its east side. The council intended to sell the vacant land in separate lots, but Chester architect John Douglas bought the entire length of the east side of the street and planned to create a series of buildings in a unified architectural design. Douglas originally intended to construct the buildings in stone with brick diapering in Gothic style. However, he was persuaded by the Duke of Westminster to include black-and-white half-timbering in his design.

The terrace is constructed in three storeys, plus attics, with roofs of green Westmorland slate. There is one bay facing Eastgate Street and nine bays along St Werburgh Street. The ground floor of the bank is built in yellow sandstone on a granite plinth; the piers between the shops are in sandstone. The upper storeys are all half-timbered. The Eastgate Street face of the bank has a four-light mullioned and transomed window with a basket arch on the ground floor. On the first floor is a five-light oriel window, above this is a six-light window with casements and the whole is surmounted by a gable with a carved bargeboard. Set at an angle on the corner between the streets is the doorway with a moulded basket arch over which are three ogee arches. Curving round the corner on the first floor is a three-light window. 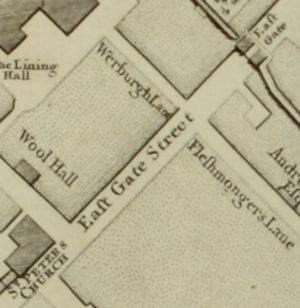 The Lavaux Map shows "Werburgh Lane" but does show the long-vanished "Flesh-mongers Row" of which only a remnant as Newgate Street remains.

Along St Werburgh Street, the first five ground floor bays are in stone, and the rest have modern shop fronts. The first floor has a variety of windows, some of them oriels; the second floor also has windows; these are in plainer design. Between the first and second floors is a carved bressummer. The whole front is topped by eleven gables of varying sizes. At the north end of the terrace is a turret with an octagonal spire surmounted by a lead finial with a weathervane. Rising from the roof are brick decorated chimney stacks. The upper storeys display "an unbroken expanse of gorgeously ornamented half-timber", and include carvings of Norman earls, saints (including St Werburgh), and Queen Victoria.

Douglas' biographer Edward Hubbard considered that in this piece of work, Chester's "half-timber revival reached its very apogee" In the Buildings of England series, Pevsner and Hubbard state: "The composition is Douglas at his best (though also at his showiest) .. It is "undoubtedly Douglas's greatest work in Chester and the high point of the Victorian black and white revival in the city"