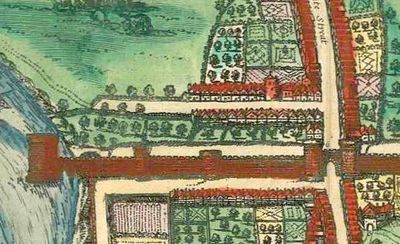 The site of St John's Hospital on the Braun and Hogenberg Map of 1581. This is subject to several possible interpretations. Comparing this with the Smith Map (and sketches) it is possible that the original Hospital was located to the north of the present site. However this is most likely St Thomas' chapel with its graveyard.

St Thomas the Apostles Chapel was situated in the Abbey Court on the ground which is now occupied by the Deanery. This was not the only St Thomas, a second chapel of the same name was apparently located near St John's Hospital. Pigot writes of the extramural chapel:

T. Cadell And W. Davies version of Lysons (volume II) also has Jolly's Hall being named "Green Hall" and states that the name of Jolly was aquired from a subsequent proprietor. There is some confusion about the actual site, which may be that of the "George and Dragon".

There is a modern St Thomas as well. In 1868 the growing population of the parish led to the decision to build a chapel of ease, and land was obtained from the Dean & Chapter in Parkgate Road. The cornerstone was laid on 6 April 1869 by H.C. Raikes (MP for Chester) with the west end of the building bricked up to facilitate extension when circumstances permitted. The new chapel, dedicated to St. Thomas of Canterbury, was consecrated on 4 April 1872 by William Jacobson, Bishop of Chester.

Thomas Becket seems associated with an inordinate number of relics of which at least one was supposedly at Chester. His girdle was supposedly in the hands of the nuns of Chester but was lost at the Reformation. Nothing is known of the nuns' relic beyond the fact of its existence in 1536. Several other places also claim to have been in possession of the same relic or parts of it, including bloodstained parts of his cloak, belt, shirt, shoes and hood. The place of his martyrdom also seemed to act as a magnet for relics having a part of his skull (with sword hole), the rest of his bones, some flagstones (with footprints): Gabriel Tetzel von Nuremburg, in 1466 wrote:

Henry VIII was particulary against veneration of Becket he destroyed Becket's shrine and bones and ordered that all mention of his name be obliterated. A very rare example of a ceiling boss featuring his survived at the Cathedral.