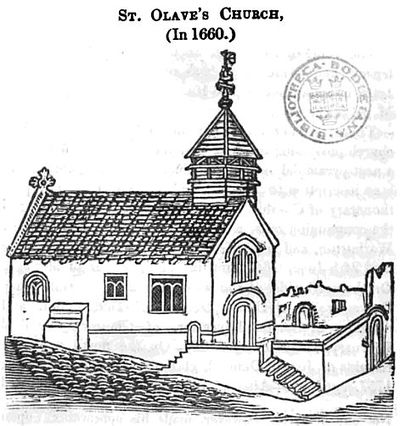 St Olave from a Randle Holme woodcut. As used by Hemingway. The ruins to the right are probably those of Paris Hall as discussed on page relating to Bridge Street. The tower has the appearance of a "stave church" possibly a link to its Norwegian connections.

The church was founded in the 11th century. Its dedication is to Olaf II, a Norwegian king. At the time that the church was founded, the area around Lower Bridge Street was largely occupied by Scandinavians, and it is thought that this is the reason for the dedication. The present church building dates from 1611.

Hemingway describes it as follows:

St. Olave's cannot have come into being before the mid 11th century, since the dedicatee, the Norwegian king Olaf II Haraldsson, was killed (at the Battle of Stiklestad) only in 1030. St Bridget's, however, could well be earlier. The dedication was especially likely to have been favoured by immigrants from Ireland and was used also at West Kirby, in the Scandinavian settlement on Wirral. Moreover, since the medieval parish of St. Bridget's at Chester was in two portions, separated by parts of other parishes, it was perhaps once larger and had been eroded by later foundations. The church was probably the first to serve the Hiberno-Norse in Chester and dated from the period of their settlement in the city.

A more remote possibility is that St Olaves is associated with the family of Harold Godwinson (see links), who is also associated with the Chester Hermitage. A case can at least be made for the Godwin family endorsing the traditions of Olaf II. Their association with St Olave's church in Exeter is demonstrable: it was founded in 1053 by Gytha, the mother of King Harold. St Olave's church at one end of London Bridge in Southwark (which gives its name to Tooley Street) is highly likely to have been a Godwin-related foundation: the church’s probable beginning is as a private chapel of Godwin, Earl of Wessex from at least 1018 (before Olave died), and may have been later rededicated to Olaf. St Olave's church in Chichester is also likely to have been so: the Godwins owned land there and nearby Bosham (two miles away) is mentioned by name in the Bayeux Tapestry:

Harold's strong association with Bosham and the discovery of an Anglo-Saxon grave in the church has led some historians to speculate that King Harold was buried there.

In 1119 the church was given by Richard the Butler to Chester Abbey. The living was a rectory in the gift of Chester abbey in the Middle Ages. It was united with St Mary on the Hill in 1394, separated in 1406, and thereafter independent until 1460 or later. 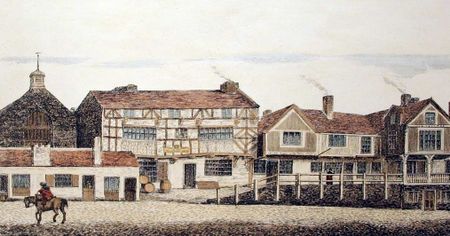 Chester was well placed to take advantage of local traffic along the River Dee and, more importantly, long-distance seaborne trade. From the 10th century onwards it developed connections with Ireland and with Scandinavian settlements all round the Irish Sea. The importance which the Norse of Dublin, for example, attached to the link is apparent in their attempts to set up fortified quaysides, harbours, and navigation points along the north Welsh coast to ease the journey between the two ports. Chester almost certainly contained a sizeable Hiberno-Norse community involved in the Irish trade, located south of the legionary fortress in the quarter next to the early harbour where the clearest evidence for pre-Conquest settlement has been found.

Huts excavated in Lower Bridge Street have been interpreted as of the bow-sided type especially associated with Scandinavian sites in England. The dedications of the two churches in the area, St Bridget and St. Olave, were also appropriate for a Hiberno-Norse community. The settlement may well have extended across the river into Handbridge, which in 1086 was assessed for tax in "carucates" rather than the hides normal in Cheshire. Carucates occurred elsewhere in the county in association with Scandinavian place-names, and appear to be evidence of Scandinavian settlement. 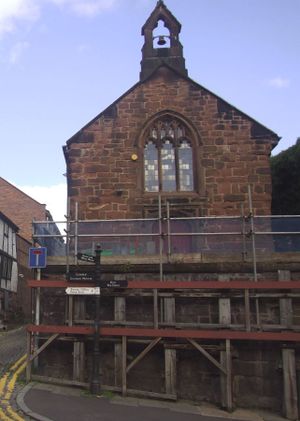 St Olave in 2014, with the retaining wall supported.

Archaeological finds have confirmed a Hiberno-Norse presence in Chester. In particular, a brooch with Borre-Jellinge ornament found at Princess Street is identical with a brooch found in Dublin, and must have derived from the same mould.

The Norwegian king Olaf II Haraldsson was born in 995, became King of Norway in 1015 and ruled until 1028. During his life he was known as "Olaf the Fat" (Ólafr digri). His history according to the Norwegian and Icelandic legends goes as follows:

Olaf himself is portrayed in later sources as a wise and saintly, miracle-working figure, although the historical Olaf did not act this way: he was a rather harsh ruler and prone to rough treatment of his enemies. He did import Bishop Grimketel from England and it was Grimketel who declared Olaf a saint less than a year after the king died. At this time, local bishops proclaimed a saint, and a formal canonisation procedure through the papal curia was not customary (in Olaf's case, this did not happen until 1888). As an historian and mythographer Snorri Sturluson is remarkable for proposing the hypothesis that "gods" begin as human war leaders and kings whose funeral sites develop cults. This possibly explains Olaf, and many of the other kings who became saints shortly after their death (such as Oswald of Northumbria).

A photograph from the 1960's shows an opening into a void beneath St Olave. This is located in some fairly impressive-looking masonry which was exposed during the redevelopment of an adjacent site, once a brewery known as "Rotten Row". 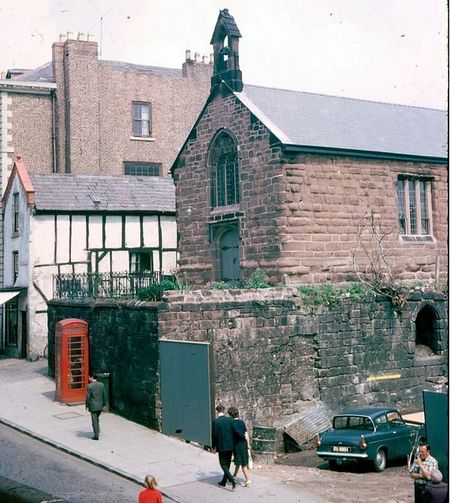 St Olave, and the "passage" beneath.

The building in question was initially the home of "Richard the Engineer" ("Richard L'Ingenour") the royal master mason of Edward I. L'Ingenour held the manor of Belgrave and was responsible for the purchase of materials and making of contracts with craftsmen. In 1275 he was granted the lease on the Dee Mills, and later renewed this lease (in 1284 for 12 years at the immense cost of £200 year - however it was compulsory for most citizens to have their corn ground there). Under the supervision of L'Ingenour, Richard de Paris made considerable alterations to Chester Castle. The building was known as "Pareas Hall" after its sale by Richard the Engineer's son Almaricus, in 1321, to Robert Pares (or Praers). There appears to be some confusion as to whether Robert Pares and Richard de Paris are the same person or two different people.

What we know of Richard the Engineer is that he first appears as the superintendent of works on the outer bailey of Chester Castle in 1265. He is therefore unlikely to have been born after 1240. His first mention in the royal records is in 1277 when he was put in charge of 1850 men (including 970 diggers, 330 carpenters, 320 woodmen, 200 masons, 12 smiths and 10 charcoal burners) at Flint to begin work on Flint castle. Richard then vanishes from the royal records for a while. One possible reason for this could have been the great fire of Chester of 15th May 1278. It has been suggested that this fire led to the opportunity to rebuild Chester with The Rows. Richard reappears on 16th March 1281, when he joins Master James of St George at Flint and is now paid 10d a day, but may have been called back to Chester quickly as the Old Dee Bridge was swept away that year. In 1282 he is back in Wales again supporting a military expedition by first repairing Hope (Caergwrle) Castle, and then building a bridge of boats to cross the Menai Strait. In 1283 he is associated with early work on Caernarfon's castle and walls. 1284 has him procuring tools for Conwy. In 1287 he is at Carmarthen building a siege engine. This was used successfully but as Rhys ap Maredudd moved to another castle (Newcastle Emlyn) Richard's engine was hauled there by 60 oxen and used successfully again. Another revolt in 1287 under the leadership of Madog ap Llywelyn brought Richard back to military matters, preparing another bridge of boats for crossing the Menai Strait at Beaumaris. In 1303 Richard undertook a series of repairs at Chester Castle following a fire and the same year in January he was consulted over the possibility of building pontoon bridges during Edward I's war with Scotland. These were constructed in Norfolk, and sailed up to Stirling on 24th May. The abbot of Chester pledged substantial sums to Richard in 1310 and 1312–13 for work at the cathedral. Richard was elected Mayor of Chester in 1305. He also (before 1309) built a house at Belgrave, after beginning to acquire land in Eccleston in 1284. Little of the house remains other than the moat.

In the later C17, Randle Holme, the Chester Herald, noted that the building in Lower Bridge Street was a rare fortified town house:

Large stone town house with high towers are very rare in English medieval cities, so the builder must have held considerable influence as Richard the Engineer did. But what of the stories of the tunnels connecting various places around Chester with the Castle? Hemingway writes: 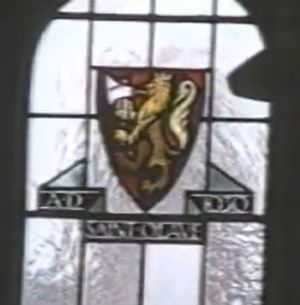 So whether Richard the Engineer had his own private escape route to Chester Castle or not, remains a mystery.

At the dissolution of the abbey the advowson seems to have passed into private hands, and in the earlier 17th century belonged to the Vawdrey family. After a prolonged dispute it was sold in 1661 to Hugh Harvey, in whose possession it remained in 1685. Before 1722, perhaps in the 1690s, the living passed to the bishop of Chester, and afterwards was regarded as a perpetual curacy until its union with St. Michael's in 1839.

In 1841 the parish of St Olave's was united with that of St Michael's, and the church closed. The building was restored in 1849 by James Harrison and converted into use as a school. The churchyard, which existed by the 17th century, was closed for burials in 1851. It was declared redundant by the Church of England on 3 October 1972. It has since been used as the Chester Revival Centre, a Pentecostal church, and as an exhibition centre.