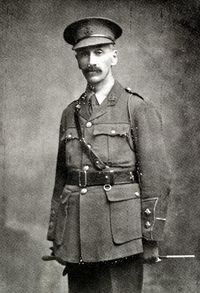 Frank Simpson during WW1. He held the rank of Lieutenant and Quarter­master of the 3rd Battalion, Cheshire Volunteer Regiment

Frank Simpson (1863-1942) was a prominent figure within his native city of Chester. During the First World War he was Quartermaster of the Chester Volunteers formed for home defence in 1914. While the English Heritage website says the wall paintings in Chester castle were discovered in the 1980s, Lewis mentions them as being visible in 1848. Frank Simpson mentions the paintings as partly visible in 1928 and describes the interior of the chapel as follows:

Nowadays using a wet brush in the manner suggested would be frowned upon!

Frank Simpson was a keen photographer as well as the author of several works on Chester: