Banter in the House:

It is often said that there an old law in Chester that a Welsh person found within the city walls after dark can be "shot". The law was actually mentioned in House of Commons as recently as 6th Feb 2007 when Christine Russell (MP for Chester) said:

Of course, Ms Russell was not being serious (I hope!). Despite this the Rt. Hon. Mr David Jones (Member of Parliament for Clwyd West / Aelod Seneddol dros Orllewin Clwyd) thought it wise to point out: 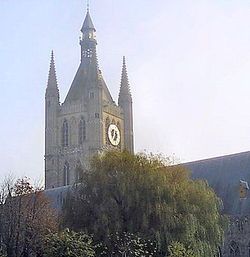 The Cloth Hall in Ypres - no clock on one side either.

This is perhaps a bit unfair as the Town Hall was designed by the Belfast architect W. H. Lynn in 1864 and the clock was only installed in 1980. Furthermore, the Cloth Hall in Ypres (built in 1260, destroyed in WW1 and rebuilt in 1934), upon which the Town Hall is based, only has a clock face on three sides of the tower. The link between the Cloth Hall and Chester is the Irish Linen trade - once a major source of income for Chester and supposedly cleverly alluded to by Lynn, although Lynn seems to have overlooked that the cloth in Ypres was wool and the linen trade in Chester was dead. So the "blame" here actually lies with the Belgians. However, Ms Russell replied

- it is good to see our MP's are obviously working hard on cross-border relations!

Origins of the "law": 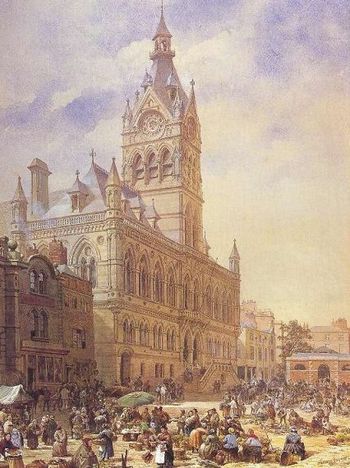 Rayners Chester Town Hall - if you carefully you'll see there are no hands on the clock face. The clock was not installed until 1980.

This "law" about the Welsh has been the subject of much discussion, but tracing its possible origins leads to a history rather different than many imagine. In 1403, Sir Henry Percy ('Henry Hotspur'), then Justice of Chester, raised the standard of revolt against Henry IV (Henry had usurped Richard II). Henry IV had also "ravaged" Chester during his brief stay before setting off to Fflint Castle, capturing Richard II, dragging him back to Chester and locking him in Chester Castle. For more on that see Royal Treasure.

Henry Percy formed an alliance with the Welsh "rebel", Owain Glyndŵr. But, before they could join forces, Hotspur was killed at the Battle of Shrewsbury (lifting up your visor for a breath of fresh air in a hail of arrows is never a good idea). At the same battle Prince Henry (later Henry V) was almost killed by an arrow that became stuck in his face. An ordinary soldier might have died from such a wound, but Henry had the benefit of the best possible care. Over a period of several days, John Bradmore, the royal physician, treated the wound with honey to act as an antiseptic, crafted a tool to screw into the broken arrow shaft and thus extract the arrow without doing further damage, and then flushed the wound with alcohol. The operation was successful, but it left Henry with permanent scars.

Shortly thereafter the law about "shooting the Welsh" first appears. In the weeks following the Battle of Shrewsbury the insecurity of both the new dynasty and some of the city authorities (some of whom had been on the King's side at the battle) was demonstrated in the instructions issued by then Prince Henry - then Earl of Chester - (later Henry V) in response to further defections in north Wales. On September 4, 1403, he wrote to the Mayor, Sheriffs and Aldermen of the City of Chester, who were required to impose a curfew upon all Welshmen visiting Chester, and to ensure that they left their arms at the city gates and did not gather in groups of more than three; all Welsh residents were expelled and any who stayed overnight were threatened with execution. Apparently, the actual wording was that:

In fact, it's not even clear that even the "decapitation" law actually existed. Several attempts have been made to find hard evidence, but no-one has actually turned up any official document.

N.B. Ms Russell (who is a qualified librarian and should know better), no mention of the crossbow - that would still be murder - you have to take an axe to Mr Jones, or one of those French Guillotine things. Oh and don't try it in the Castle Ward - because that is part of the County of Cheshire and not part of Chester. Since writing this: that has changed. 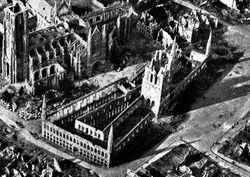 The Cloth Hall in Ypres - after the Germans had finished with it.

Evidently the people of Chester did not think much of the law:

And that MP fellow Sir William Brereton .. what did he ever do for Chester? Well, a later MP with the same name turns up in the Civil War.

Sir William Brereton - grenade throwing MP - before the Mayor's court. The image is of sculpture at the Town Hall.

Above the entrance to the Magistrates Court Room at the Town Hall, Sir William Brereton is shown before the Mayor's court, following his arrest in 1642 for attempting to raise recruits for the Parliamentary army (see: Civil War). In 1628 Brereton was elected Member of Parliament for Cheshire and sat until 1629 when King Charles I decided to rule without parliament for eleven years. In April 1640, Brereton was re-elected MP for Cheshire in the Short Parliament. He was re-elected for the Long Parliament in November 1640. Brereton was Commander-in-Chief for Parliament's army in Cheshire, played an important role in the first civil war's final major pitched battle at Stow-on-the-Wold, but thereafter faded into the background vis-a-vis military matters. Prior to this, Brereton turned his attentions to besieging Chester, a Royalist stronghold. Lord Byron, then Governor of the City, held out until February 1646, but finally had to capitulate, and the shell-shocked and starved city was almost in ruins. In 1642 (9 Nov) grenades were apparently first used at Holt Bridge at Farndon - by guess who .. Sir William Brereton. Attacking the bridge for the Parliamentarians he later stated: 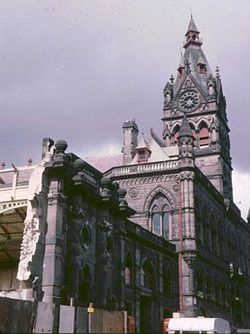 Chester Market - after the Council had finished with it. Still no clock on the Town Hall.

After the first civil war, Brereton was rewarded by Parliament; he gained Eccleshall Castle in Staffordshire and Croydon Palace, previously the home of the Archbishop of Canterbury. He later argued that the Earl of Derby (imprisoned at Chester) should not be executed for his alleged part in the "Bolton Massacre" (he was executed anyway). So what did William Brereton the grenade-throwing MP do for Chester? - shelled it mostly.

Adam Rickitt (ex Coronation Street star) has said that if he elected as a Conservative MP for Chester, he will seek to abolish the "ancient law allowing the people of Chester to kill Welsh visitors at night". He is reported to have said: "There are two archaic laws - which no doubt have been superseded - which are supposedly that if you catch a Welshman within the City Walls after midnight then you are allowed to hang them and you can shoot a Welshman from the Walls with a long bow". Adam (who confessed he was "not 100% on the detail") seems to have added the longbow and the rope to the crossbow and the axe. However the Conservatives did say they had a plan to improve the City Walls and perhaps this is it.

No doubt, both in the Commons and elsewhere, the debate will continue.

Other things Henry V did:

Besides his request that the inhabitants of Chester should take the heads off any Welsh, Henry V (who was born at Monmouth, Wales) did the following:

A few other laws that might raise a laugh:

It is illegal to die in the Houses of Parliament.

It is an act of treason to place a postage stamp bearing the British monarch upside down.

In the UK, a pregnant woman can legally relieve herself anywhere she wants – even, if she so requests, in a policeman’s helmet.

In England, all men over the age of 14 must carry out two hours of longbow practice a day.

In London, it is illegal to flag down a taxi if you have the plague