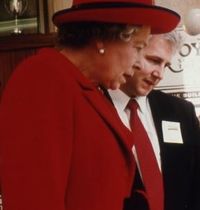 Mike Royden (the one on the right).

While Mike Royden has written two books on Chester he is better known for his historical writings on Liverpool and villages near Chester (see link below).