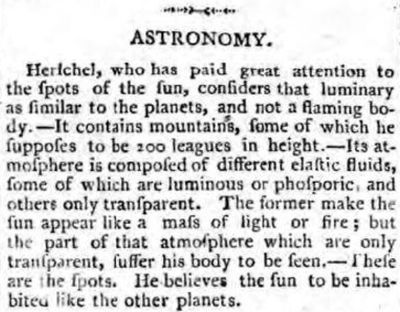 On 2nd October 1798 the Chester Courant reported that the astonomer William Herschel had stated that the sun was covered in luminous fluids, had mountains up to 300 miles high and probably inhabited.

Broster describes them as follows:

Apparently the "Newsmen" would deliver parcels as well as collectng news.

Joseph Hemingway who edited the Chester Courant and the Chester Chronicle in turn, thought that Chester could not support a third paper. His point was proved by the Chester Gazette, which lasted from 1836 only to 1840. Earlier efforts to maintain a third newspaper has also failed in the face of the entrenched position of the Chronicle and the Courant. The Chester Herald (1810–13) did not long outlast the death of its founder Thomas Cutter in 1812. The Whig Chester Guardian, despite influential support, was published only from 1817 to 1823.

Conditions changed with the repeal of the stamp duty in 1855. The Cheshire Observer was begun in 1854 by Henry Smith and Henry Mills. It started as politically neutral but evolved by the late 1850s into a popular Liberal paper, changing ownership several times. Both the Observer and the Courant were taken over in 1891 by the Cheshire and North Wales Newspaper Co., a new venture whose Conservative backers included the duke of Westminster and the city's M.P., Robert Yerburgh. The Observer was published on Friday and Saturday and the Courant on Wednesday, later Tuesday. The group closed the Courant, whose circulation was falling sharply, in 1984, then passed into the ownership of the Chronicle, which ran the Observer as a mid-week paper before closing it in 1989 and instead starting Cheshire Tonight, an evening paper which lasted for only 18 months in 1989–90.

The Chester Weekly Journal is the earliest known of any Chester newspaper. The first issue of this little paper probably appeared early in May, 1721. The publisher was William Cooke. At that time local news was considered mere gossip which everyone was supposed to know, so the Journal contains no local news beyond the prices of corn on the previous Saturday in Chester. All the news given is "foreign", or from London, or "From written Letters." Examples of the information provided included: 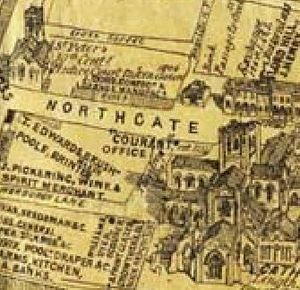 The Courant's office is marked on McGahey's map of 1853.

The Chester Courant first appeared as "Adamses Chester Weekly Courant", in 1730, at which time, according to Hemingway, the Chester Weekly Journal had ceased to exist. In fact, Cooke was evidently forced out of business by the rival title, which was established by another Chester printer, Roger Adams.

After the deaths of Adams in 1741 and his widow Elizabeth in 1771 the business passed to their daughter Dorothy and her husband William Monk, formerly Adams's apprentice. Their son and grandsons retained control until 1832. The paper changed its name to the Chester Courant in 1793. John Dixon, owner from 1832, modernized the newspaper and reduced its price. Later difficulties led to its acquisition by the Cheshire and North Wales Newspaper Co. in 1891. It was published mid-week. The Courant was vigorously Tory in the later 1740s and had a Conservative editorial line throughout the 19th century.

It ceased publication in 1984.

The Chronicle started in 1775.

The Chester Chronicle was first issued on the 2nd May, 1775 as the Chester Chronicle; or Commercial Intelligencer. It was begun by the printer John Poole in and at first struggled to survive, changing its day of publication several times before settling on Friday in 1776. It was rescued in 1783 by John Fletcher (d. 1835), whose long life, business acumen, and growing political influence in Chester ensured its continuance. Hemingway writes: 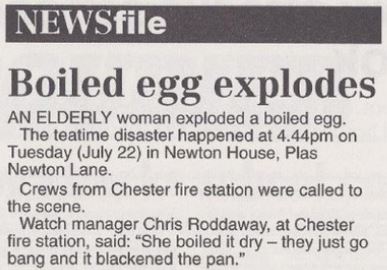 The Chronicle was a strongly Whig paper and retained its Liberal affiliation after the Home Rule crisis.

The Chronicle group also published a free newspaper from 1970. Initially called the Chester Mail, it closed in 1985 but was replaced successively by the Chester Express Mail (1986–7), Chester Mail (1987–9), and Chester Herald and Post (from 1989).

The Chester Evening Leader was launched in 1973 and has been cited as Chester's first daily newspaper. However the Chester Daily Guardian appeared for 18 months in 1884–5. The Evening Leader began life as the Wrexham Evening Leader, which also later spawned the Flint and North Wales Coast editions. It became "Chester First" but now appears to be associated with the Chester Standard.

The Chester Standard is a weekly free newspaper. It is distributed within the Chester area. It was established in 1980. Since July 2006 the newspaper can be bought by visitors to Chester in many shops, however it is still delivered free to residents. The UK's Newspaper Society voted the Chester Standard Free Weekly Newspaper of the Year in the North West, North East and Yorkshire 2008. It is now available online in PDF format;

The future of the press in Chester

The "news industry" has changed enormously in the first decades of the 21st Century. Many local printed titles have vanished, sometimes being replaced by "hyper-local", advert supported, free publications (such as "Hoole Roundabout"). These generally have high production values and are delivered free of charge to typically 10k-5k households, however they may rely extensively on "user generated content". Other "hyper-local" media include the purely online (such as "Nextdoor" - replacing the "small ads" section of the papers and actually quite good if you want to find a reliable plumber). "Blogs", "Tweets" and other social media, such as "Facebook", have also replaced the printed press as sources of "news" (and sometimes so-called "false news"). These changes can have some negative consequences: "news" may only be circulated to relatively closed groups and the hey-day of local-issue journalism which reaches most of the population of small towns has passed. Full-time investigative journalists, with an established reputation and a network of contacts, are far more likely to get to the truth of a local issue than a local "blogger" who can generally be safely ignored. And as for restaurant reviews, it is all too easy for rivals and other foes to post "one star" reviews and "friends" (or even staff/owners) to give glowing five star reviews. For example there was an article in The Independent in 2016 about an eatery which had over 20 "one star" reviews on "Trip Advisor" before it even opened! - the owner was an ex-food critic and this is an excellent example of revenge being "a dish best served cold".

On the positive side, many newspaper archives (or "morgues" to use their more colourful title) are now appearing online - some of which are free to use and go back to the 19th Century. See for example: Hoole in newspapers around 1900 - as an example of "Welsh Newspapers Online" - incomplete as regards year-on-year coverage, but it is free and fascinating reading. For other sources of old newspapers the Records Office in Duke Street and the Heritage Center at St Michael's on Bridge Street have microfilm collections (and very helpful staff), but the viewing equipment and their rolls of film are ageing (and the facility has now been closed). The ChesterWiki article on Charles Moston's "murder" on the Chester Canal would not have been possible without such resources being available.

Quick Links to the online "papers" in Chester