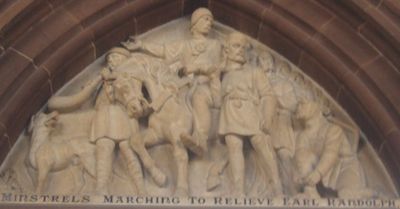 One of the carvings at the Town Hall showing buskers and beggars marching (thirty miles) to the aid of Ranulf de Blondeville against the Welsh.

Dating from the time of Ranulf de Blondeville and his rescue from Rhuddlan Castle by minstrels and various others (as depicted at the Town Hall), the last such court was held in 1756. The "Mirror of Literature" describes the origin as follows:

It is described as follows in "The Patrician" (1848) edited by John Burke, Bernard Burke

St John the Baptist's feast day coincides with midsummer, so the Minstrel court would happen at the same time as the Midsummer Watch Parade, the Chester Mystery Plays and the opening of the Midsummer Market. A horn would be blown at the Gloverstone. 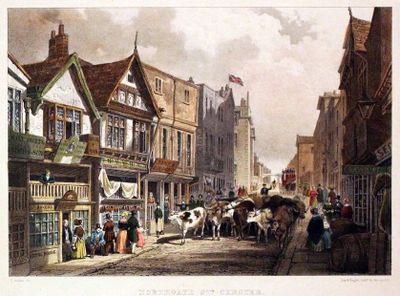 The Inn from which the procession started is thought to have been in Northgate Street, possibly on the same site as the "Legs of Man" (i.e. Manx "legs"). The "Eagle and Child" legend is associated with Stanley Palace. Despite the name changes, the "Legs of Man" was well known to be a "house of ill repute" - Chester Chronicle's "Police Report" of Saturday 12th April 1851 told of the licencee of the Forester's Arms, "better known as the Man, in Shoemaker's Row", being charged with "harbouring females of bad character there on Saturday night last".

Among the tax collections which were made at the court was also:

Peter Leycester records the issue of the charter as follows:

As noted by Leycester, the rights even made it onto the statute books. in the 1744 Vagrancy Act, (17 George II., c. 5.), the heirs and assigns of John Dutton, of Dutton, co. Chester, deceased, Esq., are stated to be "exempt from the pains and penalties of vagrancy".

The Dutton's have a branch under the surname "Button", who not only run a store on Chester Market but have kept up the musical tradition.

The Minstrel Court was revived in 2008, with musicians playing throughout the day on medieval instruments including bagpipes, hurdy-gurdy, shawm, and harps, storytelling performances, displays of arming a knight, historic craft demonstrations and a range of medieval characters including soldiers, weavers, doctors, nuns, pilgrims and scribes.