Some elements of the 2015 "Midsummer Watch Parade" assembling in front of the Town Hall. These included: a boatload of Vikings, an elephant, a troupe of Middle-eastern Dancing Girls, Herne the Hunter and his Wild Hunt, a Roman Chariot, Hell's Mouth and some Pirates. Many more were waiting in the wings.

In Medieval and Tudor times, Chester’s magnificent Midsummer Watch Parade was renowned throughout the country. First held during the mayoralty of Richard Goodman in 1498, it was organised by the City Guilds and took place in the years when the famous Chester Mystery Plays were not performed. The outstanding features of the show were the Giants – enormous structures made of buckram and pasteboard and carried by two or more men. Giants were a common feature of Tudor pageantry in England and Europe, but Chester was unique in that the city paraded a whole family of Giants – the Father, the Mother and two Daughters. There were also fantastic giant Beasts including the Unicorn, the Elephant, the Camel and the Dragon. Originally the Dragon was beaten by six naked boys, but this practice was banned in the late 16th century.

The Midsummer Watch Parade survived much longer than the now world-famous Mystery Plays, which were banned in 1575 and not revived until recent times. In 1599, Mayor Henry Hardware prohibited the Parade and ordered the Giants to be broken up. However, so popular was the show that it was revived the next year and continued until the 1670s.

The Midsummer show seems to have originated 1498-9 when Chester was visited by Prince Arthur visited the city with his page Thomas Cowper, although the visit was apparently from August 1498 until September of the same year. Thomas Cowper was Page of Honour to Prince Arthur (19/20 September 1486 – 2 April 1502), Prince of Wales, Earl of Chester and Duke of Cornwall. As the eldest son and heir apparent of Henry VII of England, Arthur was viewed by contemporaries as the great hope of the newly established House of Tudor. His mother, Elizabeth of York, was the daughter of Edward IV, and his birth cemented the union between the House of Tudor and the House of York. Plans for Arthur's marriage began before his third birthday; he was installed as Prince of Wales two years later. At the age of eleven, he was formally betrothed to Catherine of Aragon (see: Leche House), a daughter of the powerful Catholic Monarchs in Spain, in an effort to forge an Anglo-Spanish alliance against France. Cowper attended the Prince to Chester in 1498 (the prince would have been aged about 12). The Midsummer Watch Parade was first held during the mayoralty of Richard Goodman (in 1498) - organised by the City Guilds. There is an obvious difficulty in reconciling the dates of the visit of Prince Arthur to Chester (4 August 1498 - 19 Sept 1498) with the midsummer festivities during Goodman's mayorality, but it does indicate the nexus of significant events in which the origins of the watch parade is nested: the completion of a part of the Pentice, good progress on building the Abbey, an up-swing of trade with Spain, and of course the visit of the Prince. 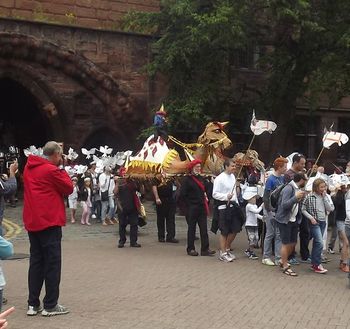 The dromedary of the kings in the Midsummer Watch Parade.

The annual Midsummer Show, held on midsummer eve (24 June) was the centrepiece of Chester’s ceremonial calendar and David Rogers’ emphasises its importance ‘it is most Comendable, rich, and beautifiill, The like in few titties of this lande.’ The Show consisted of two parts, one supported by the civic authorities and essentially an expansion of the annual armed watch on midsummer eve, consisting of guards, four giants, the Mayor’s Mount, the Elephant and Castle, four beasts, four hobby horses and the merchants’ mount. The Giants were accompanied by fools, children in costume – angels, goblins and green men. There were enormous moving floats called the “Mounts”; the most famous, the Merchants Mount, was in the form of a ship – a reminder that in those days, Chester was an important port. The whole procession was headed by a small boy, chosen each year, and the “Ancient” city drum.

The second element, shows provided by the guild companies, originally drew on figures from each guild’s respective performance in the Chester Mystery Plays. In the later-sixteenth century the guilds began to replace them with a group of uniform figures, a mounted boy with two foot-men - one to lead the boy and horse, and one to carry the guild banner. In the early-seventeenth century the shows were further reformed by mayor Henry Hardware (1599-1600) who:

However Hardware’s reforms were unpopular and met with resistance, "he got great ill will among the commons", and suppressed elements such as the giants were permanently returned during the mayoralty of John Ratcliffe in 1601.

The two shows formed a procession which paraded from the Northgate Bar through the streets with the guilds in their traditional order and livery, dispensing charity to the prisoners of the Northgate and Chester Castle jails, and terminating at St Oswalds church (the south transept of the Cathedral). The "Midsummer" watch had first been performed in 1498 and thereafter was performed annually to 1641, apart from years when plague threatened, such as 1604. The outbreak of the Civil War curtailed the show’s annual performance and in spite of attempts to revive it during the Commonwealth in 1657-8 it was only restored in 1661. It too shared the problems of other restored ceremonies, problems of non-attendance and possibly some resistance from the guilds due to the high costs of revival. In 1671 the Show was moved to Whitsun, apparently a response to the problems and in particular the inconvenience of holding the show during one of the busiest trading periods of the year, the midsummer fair. The Show continued to be performed at Whitsun until 1677, was cancelled in 1678 and ordered never to be performed again.

The mayor also held court on the day. Rogers, writing in his 1617 "Breviary" traces this court back to Normans. No copy survives of the traditional speech which would have been read by the Recorder.

The annual Minstrel Court was also held on Midsummer Day and added further pageantry to the occasion, at least until the Midsummer Show was moved to Whitsun in 1671. The origins of the Minstrels’ Court was a siege of Ruthlin Castle at the end of the twelfth century by the Welsh. The siege was relieved by the Constable of Cheshire who raised an ‘army’ of fiddlers, players, ‘merry Companions... & such routish Companions’ from the people attending Chester’s midsummer fair, who marching towards Ruthlin Castle appeared to be a great ‘army’ and so the Welsh took flight. The right to license minstrels was subsequently conferred on the descendants of the Constable, the Dutton family, and annually on Midsummer Eve a procession of minstrels from Chester and Cheshire rode through the city to St John’s church, where the Dutton’s continued to hold the court and license minstrels. In spite of pressure on the Dutton family to reform the minstrels court it continued uninterrupted until the outbreak of the Civil War, was revived by 1666 at the latest and performed annually until 1756. 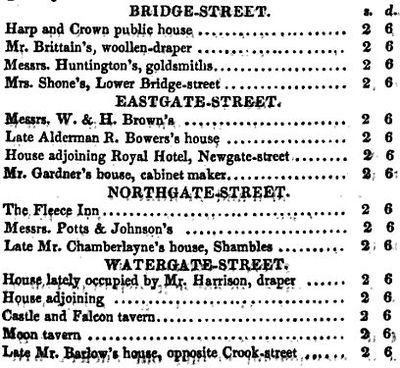 Hemmingway's list of properties whose previous occupants paid an "Execution Rent" and were responsible, among other things, for guarding the Northgate on three nights of the year.

First held in 1397, the Christmas Watch commemorated Welsh attacks on the city but by the sixteenth century had developed into a system to protect against the classic ‘urban problems’ of fire and disorder, calling forth the citys customary tenants (those paying the "execution rent") to provide watchmen for the Christmas period. Hemingway writes:

The aldermen and common councillors met at the mayor’s house at 6pm and processed in their livery, accompanied by torchbearers, local gentlemen and fireworks to the Common Hall. Assembled there were crowds of onlookers and the Watch Court, the city’s customary tenants, who were commanded to do service and symbolically handed the keys of the city. After summoning the Watch, the mayor, aldermen and sheriffs processed back to the mayor’s house where a feast was held. The Watch was then repeated over the following two nights with the sheriffs presiding. The Watch was interrupted by the Civil War siege and subsequently re-instituted possibly during the Commonwealth, although it was probably only intermittently observed until 1672 when it was firmly re-established. Thereafter, apart from a brief hiatus during the Exclusion Crisis, it was held until 1831 when it was abolished.

The first new giant was taken for a walk through the streets of Chester at midsummer 1989. A second giant was made at Lache Junior School, a unicorn at Lache Adventure Playground and a Dragon at NACRO New Careers Training in 1990. The parade at midsummer that year was the first for over 300 years. The Winter Watch Parade was re-created by the Council in the 1990’s. Unlike the Midsummer Watch that was re-created following the details in the City archives, the Winter Watch has been turned into a fun parade in the lead up to Christmas.