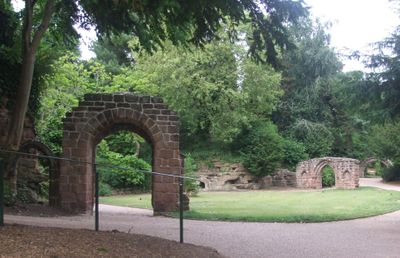 Relics in Grosvenor Park including Jacobs Well (in the center-distance).

Jacob's well is another, possibly ancient drinking fountain, now appearing to be dried up. It can be found in Grosvenor Park Chester. Beside the fountain is the inscription "Whosoever drinketh of this water shall thirst again" (John IV, 13) a reference to the original Jacob’s Well in Samaria (Palestine). The same theme is employed in the "Water of LIfe" sculpture in the cloister of the Cathedral. 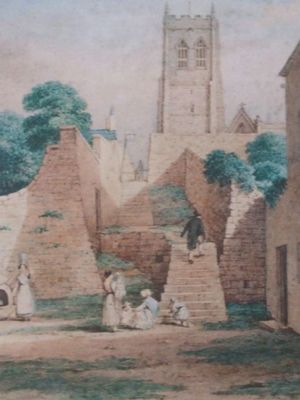 “St John’s Church, Chester” by George Angelo Bell. This shows the original location of the well.

That the well has dried up is unsurprising as the well is not on it's original site. Previously it was sited where the public toilets are located on The Groves, by the path heading down from St Johns Church to the Hermitage. It was at that time a working well and a noted "landmark" on the Groves. It was moved to its current location in 1923.

Some other ancient relics of old Chester were also re-erected in this part of Grosvenor Park:

A watercolour of “St John’s Church, Chester” by George Angelo Bell (1817-1886), now in the Grosvenor Museum, shows the well in its original location (the tower of St Johns has since collapsed), as does, possibly, the 1874 ordinance survey map. The Braun and Hogenberg map (from around 1581) of Chester does not show the well. However the John Speed Map of Chester (1605) appears to show something on the site.

Borings in 1989 about 60m south of the Amphitheatre revealed a very substantial strucure built from Roman concrete beneath the ground. It has been proposed that this was the remains of a Roman bath associated with the Amphitheater, although it is not known whether there is, or was, any association between the well and these proposed baths.

The local "ghost register" states that the alley next to the original location is haunted by "a monk in a dark habit who occasionally accosts witnesses in 'Haunted Alley' beside St Johns Church, speaking a guttural Saxon-like language." See the Hermitage article for more on this mysterious monk.

A Gallery of the Well