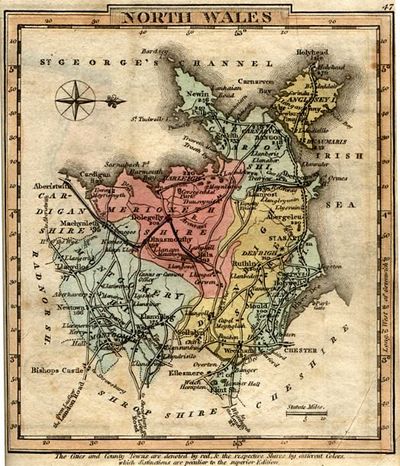 A (rotated) map of Chester and North Wales from Cooke's "Topography of Great Britain".

Cooke may be related to: "WILLIAM COOKE, Book printer and Book-Seller of the City of Chester, at the Sign of the Bishop of Canterbury near the Eastgate, doth all manner of Printing Work, as Books, Bonds &c. and selleth Books in most Faculties; With all sorts of Stationary; which Goods may be had if sent for by the Men that carried this News. Also all manner of Almanacks. December 8, 1725" (Cheshire Sheaf, II, 32).

George Alexander Cooke was the author of the vast "Topography of Great Britain", or, "British traveller's pocket directory; being an accurate and comprehensive topographical and statistical description of all the counties in England, Scotland, and Wales, with the adjacent islands: illustrated with maps of the counties. Which form a complete British atlas."

Cooke writes at length about the administrative history of Chester and generally takes the view (perhaps to excess) that the corporation of Chester were a corrupt lot (see "Charters" for more on this). His apparently in-depth familiarity with the local politics, seems to imply some local connection. A typical quote: