What if Richard III had not been killed at the Battle of Bosworth Field in August 1485..?

Richard III - "bought and sold" by the traitorous Stanleys?

Small and slender, Richard III did not have the robust physique associated with many of his Plantagenet predecessors. However, he enjoyed very rough sports and activities that were considered "manly" and, perhaps more significantly, was not afraid of leading his own army into battle. On ascending the throne he made known his desire to lead a crusade against "not only the Turks, but all foes".

Richard possibly saw himself as a chivalrous knight, as a king who would gain his "divine right" through battle. Another view is that he was a hunch-backed, murderous psychopath with a withered arm.

Richard's most loyal subject was John Howard, 1st Duke of Norfolk. The duke served Richard's brother for many years and was one of Edward IV's closer confidantes. He was a military veteran, having fought in the Battle of Towton in 1461. He was killed at the Battle of Bosworth Field.

The York faction turned up for the battle with 10,000 men. 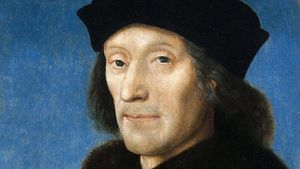 Henry Tudor was unfamiliar with the arts of war and a stranger to the land he was trying to conquer. He spent the first fourteen years of his life in Wales and the next fourteen in Brittany and France. Slender but strong and decisive, Henry lacked a penchant for battle and was not much of a warrior; chroniclers such as Polydore Vergil and ambassadors like Pedro de Ayala found him more interested in commerce and finance.

Henrt Tudor turned up for the battle with 5,000 men.

In the early stages of the Wars of the Roses the Stanleys of Cheshire were predominantly Lancastrians. Sir William Stanley, however, was a staunch Yorkist supporter, fighting in the Battle of Blore Heath in 1459 and helping Hastings to put down uprisings against Edward IV in 1471. When Richard took the crown, Sir William showed no inclination to turn against the new king, refraining from joining the Duke of Buckingham's rebellion, for which he was amply rewarded.

Sir William's elder brother, Thomas Stanley, 2nd Baron Stanley, was not as steadfast. By 1485, he had served three kings, namely Henry VI, Edward IV, and Richard III. Lord Stanley's skilled political manoeuvrings—vacillating between opposing sides until it was clear who would be the winner—gained him high positions; he was Henry's chamberlain and Edward's steward. His non-committal stance, until the crucial point of a battle, earned him the loyalty of his men, who felt he would not needlessly send them to their deaths. Even though Lord Stanley had served as Edward IV's steward, his relations with the king's brother, the eventual Richard III, were not cordial. The two had conflicts with each other that erupted into violence around March 1470. Furthermore, having taken Lady Margaret - Henry Tudor's mother - as his second wife in June 1472, Stanley was therefore Henry Tudor's stepfather, a relationship which did nothing to win him Richard's favour. Once it was clear that Henry Tudor was marching unopposed through Wales, Richard ordered Thomas Stanley to join him without delay. According to the Crowland Chronicle, Stanley excused himself on the grounds of illness, the "sweating sickness" (i.e. - a form of plague).

The Stanley's turned up at Bosworth Field with 6,000 men, but initially took no side.

History as it happened (all "accurate")